This was the way to throw a party! Let me tell you! It was a fun, and yummy, evening. And we all left with looks-enhancing gifts. What more can one want in a summer soiree?

Several of us beauty writers around town were invited to the showroom of Mannfolk PR in Hollywood last week to preview some of their clients. What a smart way to introduce us to brands we may not have previously been aware of!

As we mingled and chatted with company reps, (and each other!–it was great catching-up with other writers, since I’m always too busy for regular gal-pal-bonding,) we were treated to beverages and what my associate Flo deemed “delicious and cleverly-presented” appetizers. (More on the food in a minute.) 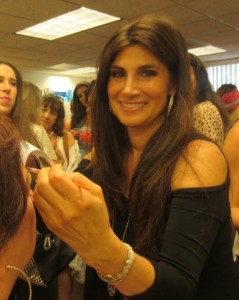 The very first thing that Flo and I did, though, was get our eyebrows done by beautiful (and non-judgmental) make-up artist Alice Farinas, using Chella’s pencils and specially-designed eyebrow stencils, to give us the perfect shape. (We’ll be trying-out a few more items in Chella’s line of eye and skincare products in the coming weeks, so I’ll let you know how they worked for us in my next Beauty column.)

Flo was positively delirious with her results, (declaring, “having my eyebrows finally shaped and colored right was a highlight!,”) and I think that that was the best mine were ever done. But I already had a feeling they were going to come out well because Alice herself looked so hip and trendy! [Note: If you were at this fete, and saw me, please don’t judge anything but my brows; it was a brutally hot night, and I’m notoriously awful in heat. I may start out-looking good, but my looks go downhill in the heat faster than Lindsay Vonn!] [Oh—her skis, not her looks.] 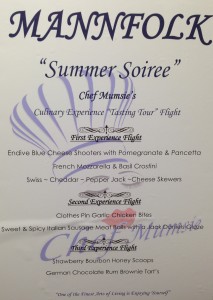 After chatting with some of the various brand representatives, (I’ll have more to tell you about them as we try out their products in the coming weeks and months, but here’s a heads-up—I discovered an indigo hoodie there that my mouth is watering to wear in the Fall!,) and several members of Dorothy Mannfolk’s amiable staff, we finally got down to sampling Chef Mumsie’s fabulous finger foods. I love that they put up a big attractive sign with the menu written-out, to make it easier for us to decide what to eat. (Hint—Flo and I ate it all! Except for the desserts; the reason for that is in the last paragraph.) 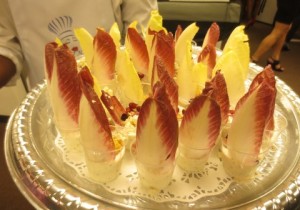 The menu consisted of all clever finger foods, which was perf because there was not time (nor ability) to sit and linger over food that required utensils! We sampled almost everything offered, including the flavorful garlic chicken bites, which were interestingly presented on clothespins! But our favorite was the beautiful blue cheese shooters that were topped with pomegranate seeds and pancetta bits, and served with an endive leaf to do the dipping. I could have just stayed in the kitchen all night, chowing-down on these delicious snacks! I would have loved to see how they did the desserts, as well, but we just ran out of time.

But, on the way out, we still go to satisfy our sweet tooths (or is it sweet teeth?) We each received a Magnolia Bakery cupcake in a pretty, protective box. Viewers of Karen’s Restaurant Revue, my former TV show, know that I’ve never been a fan of these cupcakes that originated in New York, but I must say, this time that chocolate one really hit the spot! I could have eaten ten more! I’ve been craving them ever since. I never mind re-thinking one of my opinions, and in this instance, I’m doing just that! 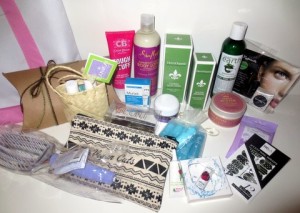 The best part of the whole wonderful evening, though, was going through the plentiful goodie bags when we got home. There was everything from creams and lotions to a vegan cosmetics case to gift certificates for hair and lashes and facials! I’ll tell you about the best of them individually, as Flo and I try them out, (although she said that her skin “already feels better from the creamy potions and lotions in the generously-stocked goody bag,”) so keep an eye on my Beauty section for those reviews. And on me looking refreshed after I use them!