As a bon vivette who believes in all things for beauty, I’m always happy to welcome a new purveyor of such to the ’hood. Geri Giagnorio is a Skin Therapist (I love that title!) who just opened her private practice at the beginning of the Sunset Strip. (Or end–depending where you come from.)

The grand opening party was just lovely–there was something happening at every turn. It was in the afternoon, so we also got great views from the big windows in the medical offices Geri shares. (And we got to touch fake boob blobs in one of them–I sure hope it belonged to a plastic surgeon!) 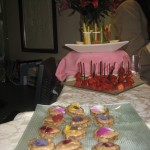 As we entered the party, after being greeted by the most pleasant door girl ever, the first thing we saw was a beautiful array of simple, raw food snacks, some from Geri’s cookbook (that’s as skinny as she is, so I trust them both!,) Eating For Better Skin: 10 Simple Steps. I couldn’t stop filling up on the watermelon that had something on it, like an herb, but I’m afraid I couldn’t find that recipe in the book. (Maybe I’ll find out if I get the chance to try one of Geri’s signature facials!) 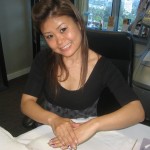 Manami modeling her own bejeweled nails better than I could!

There were different beverage stations featuring healthful drinks, both alcoholic and non, and three different beautifying activities. Our favorite was the manicures from Manami, whose personality matched the very sparkly polishes we chose. She had some brands from Japan that were so fabulous you just knew they had to be from someplace known for beauty. (Her card bills her a Nail Artist, and that is really correct!)

There were three different types of massages from one company, High Maintenance Mobile Spa. One guy did reiki (more of an energy type thing than a massage,) Arianna did chair massages, and the piece de resistance was a lying-down-while-dressed one of the neck, arms, legs, and feet from Nate Geare. We were doubled up in line waiting for him, let me tell you!!! And it was worth the wait.

Geri G has developed a skin care product, called Mixer, which was in the gift bags, and she had a lovely make-up artist there, Roberta, to show us how to use it. Since I never wear face make-up, it’s hard for me to explain, but I think that you mix it with your foundation to enhance your glow. (Check-out her website for a better understanding of just what it does and how to use it because I believe there are very many uses for Mixer.)

Mani, massage, make-up, healthful food, nice personnel, and a gift bag–exactly my kind-of event! I wish Geri G the best of luck with her new location.