As I tweeted yesterday as it was happening, I spent the most relaxing day at a SPArty (love that clever name) at the Four Seasons Hotel in Westlake Village. It was part of the Global Spa Week for all the Four Seasons in the world. (Or at least the country—I was seriously too chill to get the entire story.) 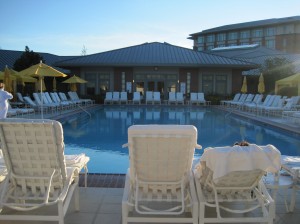 I could have easily spent the entire week at this one! I had been to a few events on this property before, always enjoying myself, but this time I got to spend quality, and relaxed, time at the spa in the hotel, which was a whole new experience for me.

Every part of the day was a highlight, so I’ll just go in order. I was part of an intimate group of beauty writers (and “social media influencers,” as the invitation stated, a moniker I love!) I loved how the day was structured, with us having group get-togethers but also time to explore alone, if we chose, (which I believe we all did.)

I got there early because, on the very few occasions that I ever have time to relax nowadays, I want to go all the way. After being greeted by our lovely event hosts, Allie Rhodes and Damien Craft, I was shown around the facility a bit, and then to my locker, where I immediately cozied up to the robe and spa slippers. 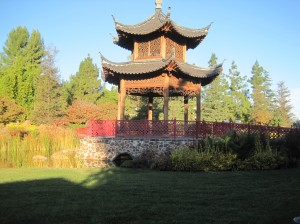 I went out to the gorgeous hotel pool, which was the perfect temperature, especially for November! I got right in and swam and did water aerobics for about forty-five minutes, which I sorely needed to do, let me tell you! And, in that pool and environment, the exercise felt especially satisfying. After a quick jacuzzi, I explored the massive expanse of stunning property in the back, including sitting in the gazebo in the middle of it, which I believe is actually a pagoda from China! (I don’t remember all the details of the story, but I remind you that I was too relaxed to give anything my full attention, which strange for me but a welcome pleasure.) 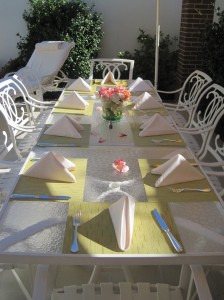 The group met up at noon in yet another relaxation area, the coed tranquility lounge, that featured a wooden red bridge in the middle, (which matches the pagoda out back,) and were escorted to a luxury spa suite that became our headquarters for the rest of the day. (And evening, for those of us who just couldn’t tear ourselves away. Guilty!) 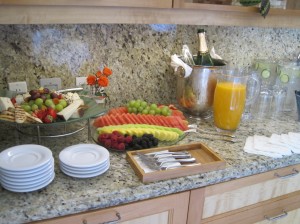 There were healthful snacks in the suite at all times, (as well as champagne for the imbibers, which actually was everyone but me!,) and then we had lunch on the private patio by the jacuzzi. We had a choice of several spa dishes, but always marching to my own drummer, I went with the most delicious burger ever! OMG, that thing was heavenly! I actually figured out two of the chef’s secrets for it, but I’m not telling; I’ve got to respect someone who can make a burger taste that special. The fries were great, too, as was the company. I sat with Damien, who’s the Spa Director, whom they’ve also dubber the “Curator Of Calm,” a title I can agree with after chatting with him for so long. He’s one of the most pleasant executives I’ve ever met, with a sense of humor, to boot, (which I know because he laughed at everything I said! Smart guy.) Our waitress, Carmela, was just great and super-accommodating. Her sweet smile made me like her right away.

After lunch, we had a little time on our own again, if we so chose, so I went straight to the steam room. Jennifer, who took care of our locker room needs, showed me all the amenities, guaranteeing that I’d stay there longer. 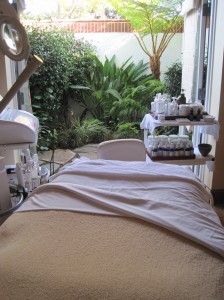 I finally got to the part of the day that I guess was considered the main event–a DNAEGF renewal facial using Dr. Moy’s products. I was thrilled on every level: I had missed a bigger party for the launch of his line this summer when my mother had fallen ill, so I was happy to finally get to try the products; my aesthetician, Sheena Brockus, had beautiful skin herself, so I was secure in whatever she did to my face and neck; afterwards, my skin felt as great as Mr. X’s back, which (he hates when I tell people this) is as soft as a baby’s anything; and I got to just relax and be quiet for an hour! Plus, the massage portions of the facial were fabulous! (I live for massages, in case you didn’t know.) 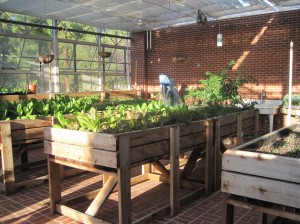 We all wound-up back at the suite for some female bonding, and then Allie, who’s the Marketing Coordinator for the hotel, took me on a tour of the grounds, including the greenhouse that houses the chef’s herb garden.

I couldn’t resist the amazing spa shower, so I had to wash my hair in there, too. It was bigger than several of my New York pals’ apartments!!!

I had a choice of at least five activities for the night, including a couple of really big events, but the day was so special that I just wanted to stay home and continue chilling, (which made Mr. X happy, as well—he hates that I go out all the time…unless I take my car, so he has more room to krump.) But I know where I’ll be heading the next time I need to relax. Or get a great burger!!