Trending
You are at:Home»BASKETBALL»BASKETBALL: TORONTO RAPTORS WIN THE 2019 NBA CHAMPIONSHIP!
By Karen Salkin on June 19, 2019 · BASKETBALL 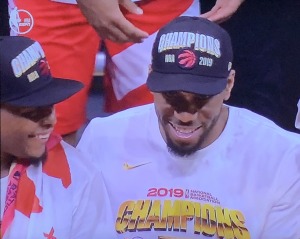 NBA Champion stars, Kyle Lowry and Kawhi Leonard, sharing a moment after their victory. You better enjoy Kawhi’s smile now, because it’s very rarely sighted! Photo by Karen Salkin, as is the big one at the top of this page.

I know I’m about five days late with this congratulatory wrap-up of the NBA season, but trust me, I watched every single second of this year’s NBA play-offs!Every…single…second.

But I was too wrapped-up in it all to take even one note. So, this will be my shortest basketball column ever!

Major Congrats to the Toronto Raptors for one amazing victory after another! I still can’t believe they even got into the finals, let alone win the Championship! 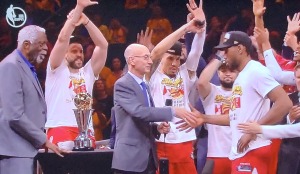 (L-R) Bill Russell, NBA Commissioner Adam Silver, and Finals MVP Kawhi Leonard, as he about to receive his trophy.

Yes, you sore loser fans of the Golden State Warriors—I know that your team was hobbled. But them’s the breaks. And have you all forgotten that Toronto’s star, Kawhi Leonard, has been injured since the Conference Semi-Finals? There were times when he could barely move. But he never complained or made excuses, and did not miss a game. Or even part of one! He just went about his business, helped his team win, and came away with the Finals MVP! 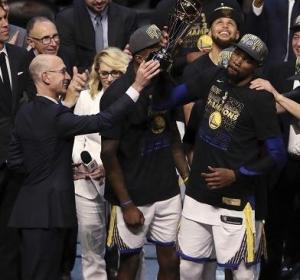 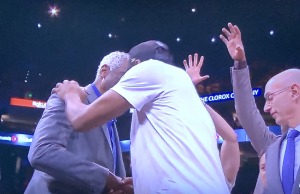 …compared with Kawhi Leonard receiving the trophy this year, and hugging Bill Russell, for whom it is named! (Note Kawhi’s gigantic hands!!!) Photo by Karen Salkin.

Speaking of receiving the MVP trophy—what a different acceptance of it from Kawhi this year, as opposed to the one from creepy Kevin Durant of the Warriors winning it last year! KD just grabbed the trophy out of the hand of Adam Silver, the Commissioner of the NBA, without even looking at him! And he did not at all acknowledge elderly Bill Russell, the sports great after whom the trophy is named, who was standing right there, ready to congratulate him!!! But the winner this year, Kawhi, not only acknowledged both older men, but thanked them and hugged Bill!!! I can’t even say that was good of him—it should be normal behavior for most people! (And he’s a shy non-talker who is known for remaining stoic at all times!) 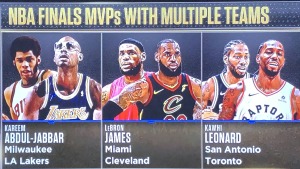 And here’s a fun note about Kawhi: He’s not only won the championship with two different teams, (the Spurs a few years ago, and now the Raptors,) but he won the aforementioned Finals MVP both times. That double-dip has put him in very elite company; only Kareem Abdul-Jabbar and LeBron James have accomplished that feat before Kawhi! 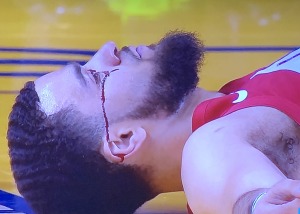 Fred VanVleet lying on the court right after he was hit. Photo by Karen Salkin.

And just to let everyone know, the Raptors’ second best player, (and longest-tenured person on the team,) Kyle Lowry, had a very banged-up hand the entire series, as well. And another player, Fred VanVleet, who contributed greatly to this victory, got knocked in the face very badly by a Warrior, lost a teeth on the court, and received seven stitches under his eye! And he returned to the game immediately afterwards! Athletes get injured when they play this deep into the season. That’s just the way it is.

But Warriors fans insist that their team would have won the Championship if not for the injuries. But two years ago, when it looked like the San Antonio Spurs were beating them in the play-offs, their dirtiest player back then, Zaza Pachulia, purposely put his foot under Kawhi’s (who was with the Spurs at that time,) to make him get injured, which he did, so that the Spurs could not beat the Warriors. And the Ws went on to win the whole thing that year, which I doubt they would have had Kawhi been able to play the rest of that series.

So meanwhile, the Warriors powers-that-be should be ashamed of themselves for letting KD play in Game 5 of the Finals, after missing the previous four weeks with what they were calling a “calf injury,” but which I’m sure was at least close to one of the Achilles tendon. It was like they were treating Kevin as a gladiator in ancient times, rather than a human being who still has years left on his career! So they let him play, and, of course, as I had predicted, he wound-up tearing his Achilles early on in that game! And that recovery will be at least a year! He’ll miss all of next season! 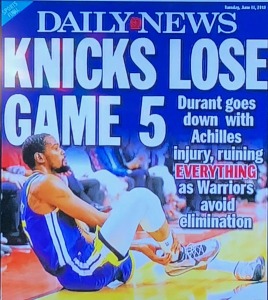 The clever headline on the front page of New York’s Daily News the day after Kevin Durant’s big injury. Photo by Karen Salkin.

That’s sad enough for Durant himself, but his being out now ripples through the entire NBA! He can opt out of his contract with the Warriors right now, but will anyone want a player who can’t play for all that time, and will be almost thirty-three when he can finally play again?! I believe he was going to choose to go to the New York Knicks, and they were going to build a team around him, (as the Lakers are doing for LeBron James, with the very recent acquisitions of Anthony David and possibly Chris Paul,) but now will other players want to put in the work for a team that does not have their star for another year? So, will Kevin stay with Golden State because he doesn’t have the options he had before the Achilles situation? It’s all a mess.

On top of that, the Warriors’ third best player, Klay Thomson, tore his ACL (in his knee) in that final game, and he may be out all next season, too!!! Talk about snake bit. (Or is it the voodoo I put on that team? I’ll never tell.)

In tennis, the commentators always say that it’s extremely hard to play against an injured opponent because you really don’t know what’s going on with him or her. So perhaps that applies to basketball, as well. I can only vouch for that it’s a bit hard to watch all these serious injuries occurring. And I do hope that, no matter what team a guy plays for, or how much I dislike him without ever meeting him, I really hope they all get better as quickly as possible.

As you may know by now I’m far from a fan of the Warriors players, but I do always admire their head coach, Steve Kerr. He is one classy guy at all times.

While I’m on the subject of class, I have to give a shout-out to the Raptors’ most improved player, Pascal Siakim. I was very impressed with his post-win interview on ESPN’s SportsCenter that night. They had all been drinking champagne and celebrating, yet he was still able to speak intelligently and movingly about his father who had died in a car accident in their home country of Cameroon when Pascal was a young man of twenty, and attending college in America. But he always expresses himself so well, especially for someone whose first language is not English. So big props to him.

And that is a wrap for me! I can’t worry about basketball any more right now, at least until tennis and baseball are over for the summer! Obviously, I have other priorities. 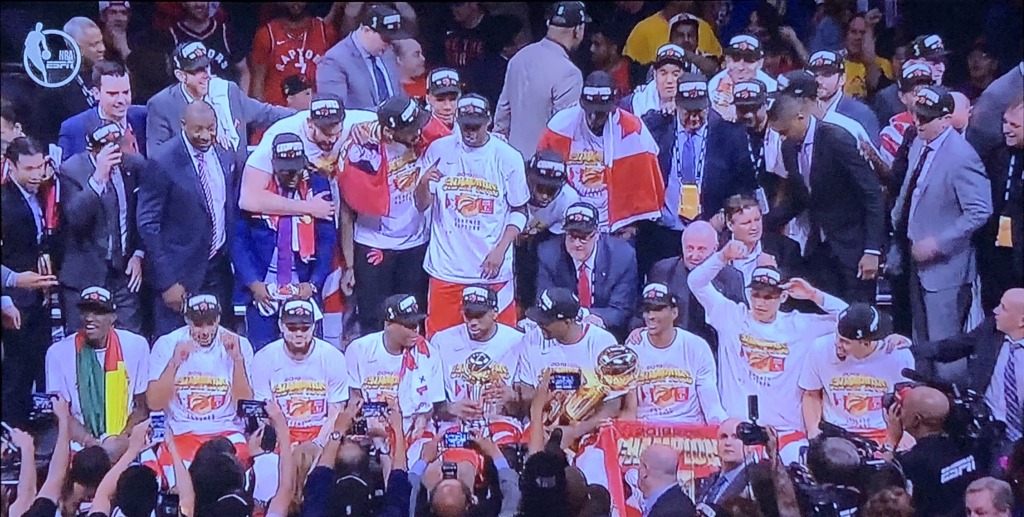 And, by the way, a couple of my not-very-sports-wise pals asked me how a team from Canada could even be in the National Basketball Association, declaring that they should not be allowed in. But despite the association’s moniker, they’re the ones who wanted teams from up north to be in there to begin with! They felt it was an untapped market a quarter of a century ago, so they sanctioned two teams from that country to enter the league. They weren’t existing Canadian teams—they were formed as members of the NBA from the get-go! The Vancouver Grizzlies failed in their part of the country, and wound-up moving to Memphis, but the Raptors have always thrived. And the NBA is thrilled to have them! (And here’s a news flash! A very old one, to boot! Basketball was invented in Canada! The very first professional game was even played there! So there, my dumb friends and any others who think the same way, when they don’t even know of what they speak!!!)

To sum up (because I’m too exhausted to think about the NBA anymore this year,) I’m thrilled for Kawhi Leonard and the entire Raptors team, the Toronto organization as a whole, the city itself, the absolutely crazed fans, (many of whom stood out in even the rain for hours, just to watch them ensemble on big screens in parks, etc.!,) and all of Canada to have pulled off this Championship!!! Major Congratulations to them all!