Wow, what an NCAA Championship game that was on Monday night! I really do think it was the best one I’ve ever seen, even if my team, (Villanova,) had not won. [Note: ‘Nova is not my perennial team; I was just into them from watching them at every step in this tournament.]

I’m exhausted from the past three weeks of watching every second of every game, and even every pre- and post-game show! So, I’m not recapping Monday night’s game here. If you’re really interested in the play-by-play, I’m pretty sure that means you watched the game live. (Or at least recorded it that night.) If you’re only moderately interested, you’ve probably already read the deets on a sports site. (And can still do so.) And, if you don’t care at all, you’re reading this just for some color commentary. Hence, I’m sparing that last group what they would consider the boring details, even though my mouth waters for those kinds of deets. 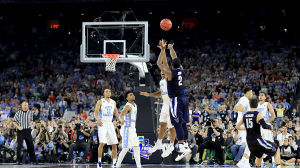 So, let’s just say that the game was exciting from start to finish, especially finish! OMG. Right after UNC player, Marvin Paige, hit an amazing three-point shot to tie the game up, with just 4.7 seconds to go, Kris Jenkins from Villanova hit an impossible one himself, for the incredible last nano-second victory! (He was so cute—when a reporter asked him if he thought that shot was going in, he answered, “I know they’re all going in, and this one was no different.” Adorbs. And the right kind of confident!) Maybe now commentator Bill Raftery will stop referring to Kris as a “chub!”

As much as I hate to see the UNC seniors be crushed like that, I am totally thrilled for Villanova. The players are all interesting, and Coach Jay Wright always seems to be a lovely man. So, I’m happy for them all.

Along the way, there were some really interesting human interest stories, which you know I love. That’s what any sporting event is all about to me, anyway. [Note: I actually just recently figured that out! A little while back, a female friend asked me why I love sports so much, and I really could not put my finger on it. But it all became clear with this tourney—it’s the human interest stories!] 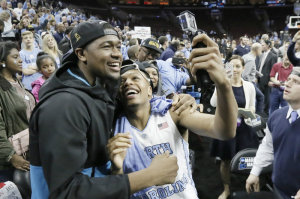 All of the stories the broadcast featured this year were great, but there’s been none more fascinating to me, (and the rest of sports fans, too, I’d suspect,) than the tale of “brothers” Nate Britt from UNC, and the aforementioned hero of the game for Villanova, Kris Jenkins. It’s really too long a tale for me to tell right now, but here’s a link to another article about those dudes: www.dailymail.co.uk/news/article-3522030/Brotherly-battle-Jenkins-Britt-national-title.html. [Sorry it’s from the Daily Mail, whose writers are more often than not illiterate, but they do have the gist of it correct. And, once you have the names and the topic, you can look it up elsewhere, if you’re as nutty a researcher as I!] 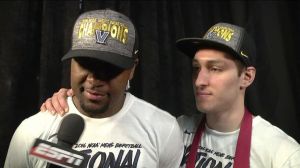 Another wonderful story is of Jay Wright and his mini-me player, senior Ryan Arcidiacano, (who not only made the pass to Jenkins for that shot, but was awarded the tourney’s Most Outstanding Player title.) Jay said he never had a player like that before. He’s declared that he’s never had to coach the guy, per se, because they’re always thinking alike. And Ryan has been the Captain of the team all four years that he’s been at the school! That’s a major deal. Jay and Ryan really wanted to win this championship for each other.

And barely-known sophomore Phil Booth came out of nowhere to score twenty major points, without which Kris Jenkins’ last second heroics would not have been possible. He’s one of the heroes of that game, as far as I’m concerned.

Now, because the last time I wrote about this tourney, as a whole, was the day before the Final Four, I just have to go back and give you some of my random thoughts on those games (and attendant coverage.) Here goes: 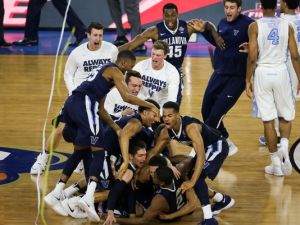 I was very disappointed in the pre-game show. There were absolutely no human interest stories about the players!  What was up with that sitch??? They always feature at least a few in the three hours, but this go-round they could not muster even one??? They need to go back to the stories next year, not just for me, but for the people who haven’t watched the whole tourney, so they can maybe figure out for whom to root at the end!

Instead, the panel chatted with on-set guests George Foreman, Kendrick Lamar, and David Lattin, a old-time player from the historic Texas Western win in 1966.  While that was all very interesting to me, I wanted learn more about the current players! (That would have been easy to achieve even a tiny bit, and even with those gentlemen, because David Lattin is the grandfatherof current Villanova player Khadeem Lattin, and there was sooo much they could have asked the granddad about that, eespeciallybecause vviewerswere curious as to how Khadeem was doing at the moment since his beloved grandma had just passed away five days before! We don’t even know if she was David’s wife, or the other grandmother!)

During the player introductions, when the numbers 94 and 50 were flashed on the screen, (which were the dimensions of the court,) I didn’t realized what they were, and asked Mr. X if he knew. He joked that that would be the final score of the Villanova-Oklahoma game.  And then it turned-out to be the unheard of 95-51! Wow! How prescient was he?!

I love the name Kennedy Meeks, (who’s one of the UNC players.) It’s so much better than my previous favorite moniker in the tourney, which belongs to a fun player from Middle Tennessee, Giddy Potts! If ever I had a daughter, (which at this point is very doubtful, since I still have no desire for kids,) I’d name her Kennedy, because Id love it more for a girl. (But it’s a great name, no matter on whom.)

Okay, now to something serious. In case you missed it last week, one of my loyal readers, Curtis, posted this comment on my previous piece on the NCAA tournament: “I think you should have discussed the dirtiness of the UNC and Syracuse programs. What a terrible example for the NCAA. [Syracuse Coach] Boeheim said a few days ago that ‘rules were broken but Syracuse never cheated.’ What?! And UNC’s record of lying and academic fraud can be traced over 18 years, but Williams insists he knew nothing about it. I watched a few minutes and realized I didn’t care who won but hoped somehow, both would lose.”

Well, Curtis got his wish! Syracuse lost in the Final Four, and the Tar Heels lost in Monday’s Final.

I really can’t address the allegations themselves, because, even with my obsessive research, a lot of them are shrouded in secrecy, and it seems to be taking the governing body of college basketball a couple of years to be sorting it all out. All I know is that coach Roy Williams, of UNC, said it’s about the rest of that university’s sports programs, but not the basketball one. So, I really can’t participate in a passionate discussion about what’s supposedly gone on, either way. (I’d be happy to read all of your thoughts on the situation, though, in the Comments section below.)

I believe that part of the problem, at UNC, at least, is that the athletes get to take easy classes to meet their academic responsibilities. So, here’s a ittle personal story about one thing I do know on the subject: In 1996, I became friends with the UCLA basketball team who had been the champs the year before. Really good friends. I hung-out with them a lot, they came to all my clubs, and they set-up tickets for me to all the UCLA home games, and in the VIP section, no less!!! I had a great time with those guys.

The very first time one of the guys took me to lunch a few days after I met him, I learned that one of his classes was Turkish! Turkish!!! I praised him for doing that, and told him how impressed I was with him for tackling a course like that. He thanked me, and we didn’t discuss it anymore.

A couple of weeks later, I was talking with one of my pals who had graduated from my beloved UCLA a few years earlier. She told me of the very easy time she had had at that school, and I asked why. She answered that she just followed the sports guys around, and took whatever they did, because their classes were basically no-brainers. She mentioned that she had taken Turkish, because it was the easiest class ever! She said it was a guaranteed “A!”

So, if student athletes are getting to take easier classes at some of the schools being investigated, it seems to me that they are far from isolated incidents.

So, there you have it.

But, I don’t want to leave the topic of the NCAA tournament on a bummer note, so let me just congratulate all of the sixty-eight teams for making it to the “post-season” to begin with, and, of course, Villanova the most!

And thank them all for a wonderful, although totally exhausting, March Madness. I can’t imagine 2017 topping this 2016 one!