Trending
You are at:Home»BASKETBALL»BASKETBALL: FIRST WEEK OF MARCH MADNESS 2019
By Karen Salkin on March 27, 2019 · BASKETBALL

What have I been doing for the past week, you might ask? I’m sure the people whose emails I haven’t replied to and phone calls I haven’t returned are curious.

The people who know me well should realize just where I’ve been. I’ve been sitting in front of the TV, watching every second of the first six days of March Madness!!! I’ve been fascinated by this college basketball tournament for a couple of decades now, and I usually watch every day of it, from start to finish, (which is usually about 9AM-10PM!) I’m sure that most of you think I’m crazy, and I am—crazy about basketball!!! 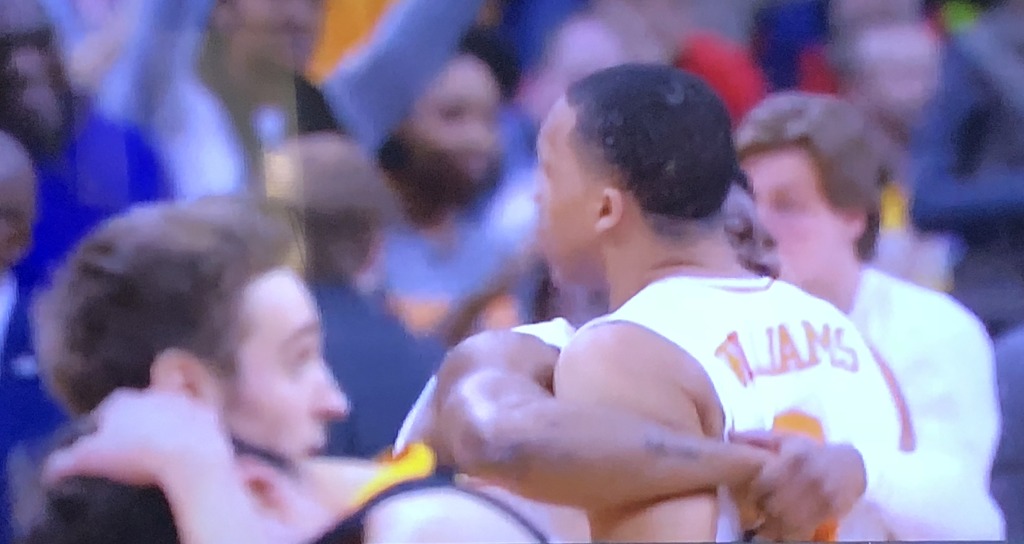 A perfect example of “the thrill of victory, the agony of defeat.” The two players in the foreground just lost to the two in white. Photo by Karen Salkin, as is the one at the top of this page, of the studio analysts showing the schools they expect to do well in the tournament.

And no—this is not a Mr. X thing; he often watches only the last minute or so of each game with me. Unlike me, he’s about the results, not the journey.

I usually wait until after the Championship Game to comment on the entire tourney, but this first week of the three has been so juicy that I feel I should share it with you now. (Many of the stories will be fun for even non-sports fans!) These might even give you all clues as to what to look out for in the rest of the games, which begin on Thursday.

So here are my pertinent thoughts on each day’s proceedings:

It cracked me up when LeVelle Moton, head coach of North Carolina Central, told his team, “One percent of people in this world actually get an opportunity to live their dreams. One percent!” Just where did he get those stats???

Tyson Ward, who plays for North Dakota State, needs to be a broadcaster when he’s done playing. He has a very soothing voice, and speaks so well.

One of the most human things I’ve ever seen in this tourney was that several of the opposing St. John’s players went right over to Luguentz Dort of Arizona State to help him up after he had a bad dramatic fall from high up in the air. (And then the idiot refs called a flagrant on one of them! Dreadful call.) 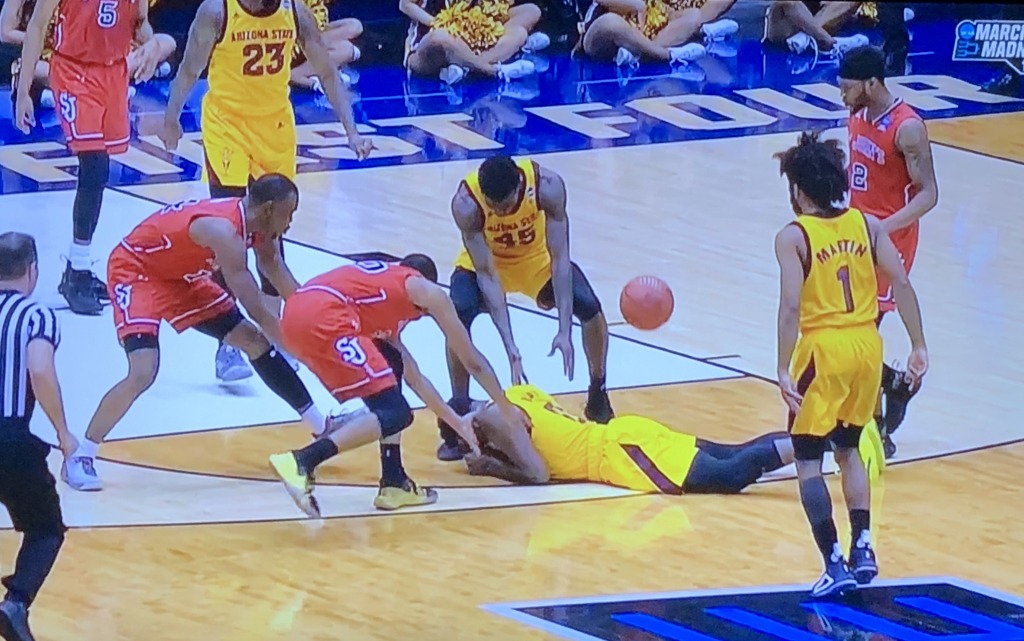 Play-by-play guy Spero Dedes called Dort “the freshman stud from Montreal.’” Am I the only one who thinks that was weird?

The accolades for amazing Zion Williamson of Duke, who will for sure be drafted #1 this year, started right away. His coach, Mike Krzyzewski, said of him, “He’s hard to explain—you have to experience him,” while Syracuse coach Jim Boeheim summed him up in this amusing way: “He’s like Charles Barkley was, except he’s not as fat.”

At one point, Vermont players, the Duncan brothers—Ernie, Everett, and Robin—were on the floor at the same time. That’s the first time that has ever happened in the history of this tourney!

I love the great advice that Ja Morant’s dad gave him when he was deciding which college to attend. He told him, “Go where they want you, not where you want to go.” And this under-recruited kid from Murray State is remarkable! Trust me—I’ve watched much more than my share of college basketball for the past two decades, and I’ve not often seen anyone like him. He had a rarely-gotten triple-double in the first game of the tourney, with more than four and a half minutes to go, to boot! [Note: That’s only the 17th one in tournament history, and the first for any player in seven years!!!] And he’s a great example of why to stay in college to mature. As a freshman last year, he was quiet—I watch every second and don’t remember him, even a little. Now as a sophomore, he’s probably the second best player to the amazing Zion Williamson. 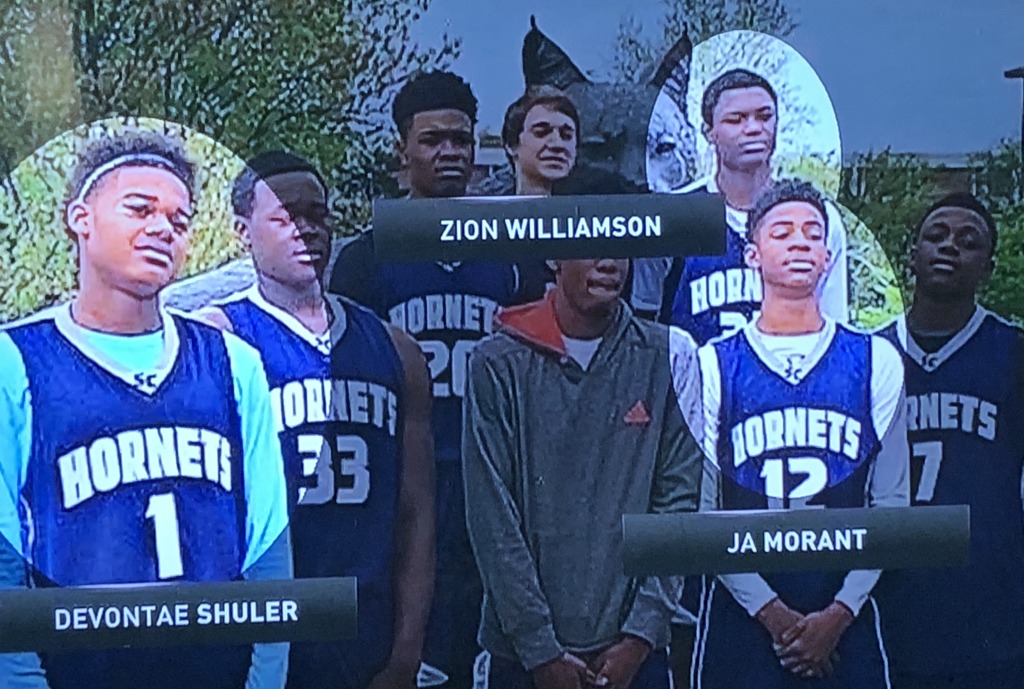 Three of the tournament players, including the top two–Zion and Ja–playing on a team together back in the day. Photo by Karen Salkin.

During his first game of the tourney, Fletcher Magee of little-known school Wofford, got the NCAA record for three-pointers! He now has five hundred nine in his career to date! [Note:  But he made none in the second, which was an anomaly, but I’m sure he still felt awful, especially because his team lost.] 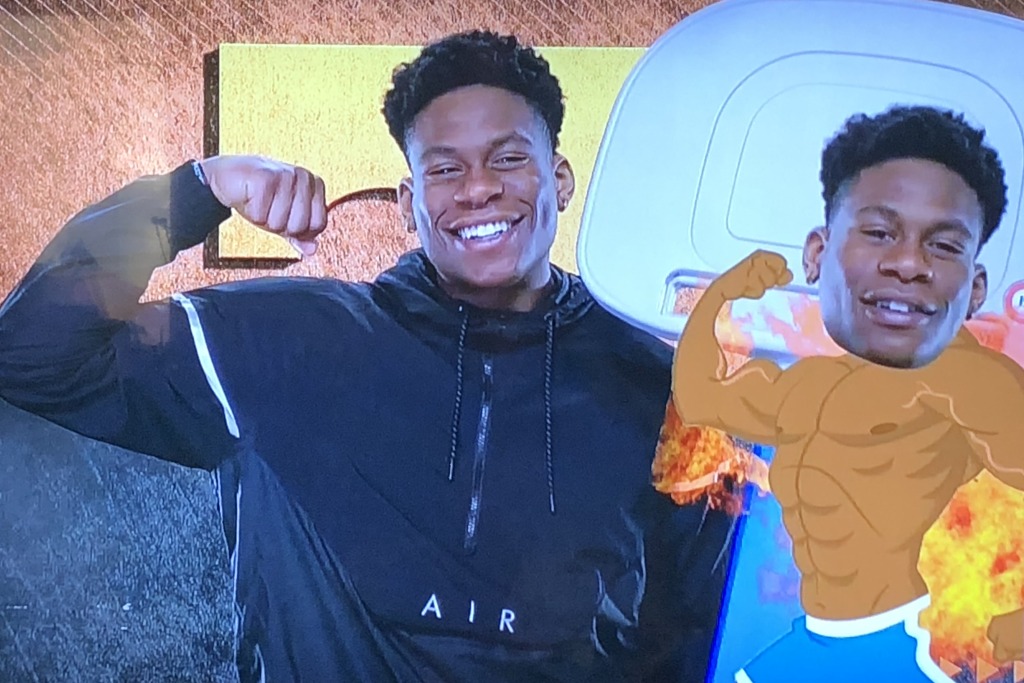 Now I add my own props of Zion Williamson, with whom I could not be more impressed. Many advised him (publicly, but I have a feeling privately, as well) to not play the rest of the year after his terrible leg injury late in the season, to preserve his NBA draft status. But he wanted to be there for his teammates. Or to have the March Madness experience once. Or both. And that was great of him.

This is a pretty spectacular stat: In their second round game, Gonzaga’s Brandon Clarke got thirty-six points, fifteen percent of the entire team’s field goals, eight rebounds, five blocks, three assists, and two steals. What a productive day at the office!

My favorite moment so far was at the end of the crazy, hard-fought Tennessee overtime win over Iowa, after having led by twenty-five points in the first half! Iowa’s star player, Tyler Cook, was inconsolable, sitting on the bench, instead of getting up and getting in line to shake hands with the opponents. So Tennessee’s Admiral Schofield and about five other Volunteers went over to him to surround him, and they each gave him a heartfelt hug. OMG. It took me a long while to stop crying after witnessing that incredible sportsmanship and caring. 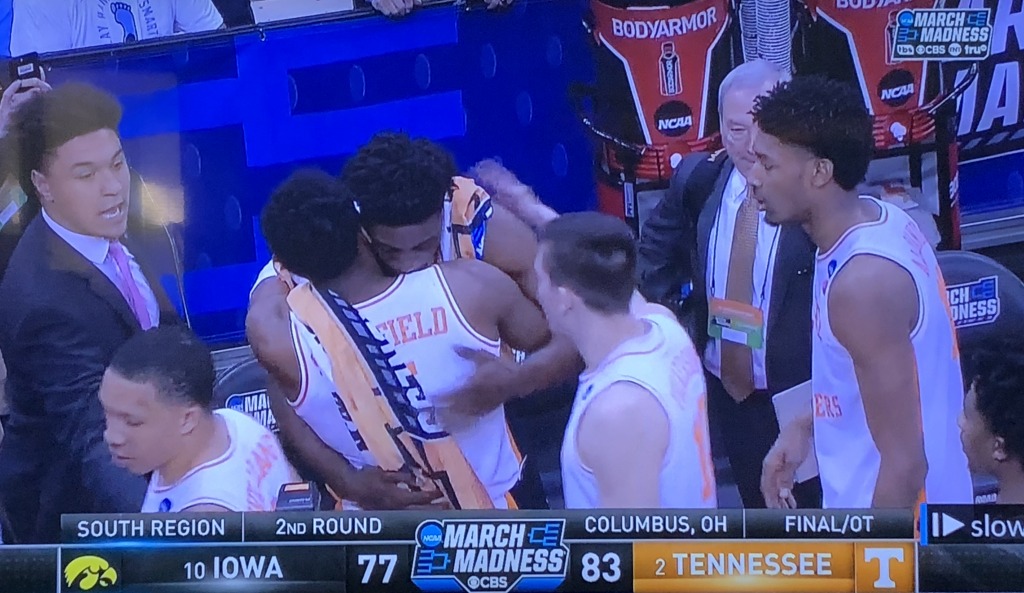 What a game Duke vs. UCF was!!! It tugged at my heartstrings. I really do think that Duke’s Coach K was more upset for UCF head coach (and Mike’s own former player and assistant coach,) Johnny Dawkins, than he was happy for himself. The whole thing made me cry. (I later learned more of the history of these two men. You should really research it sometime; it’s quite the story.) 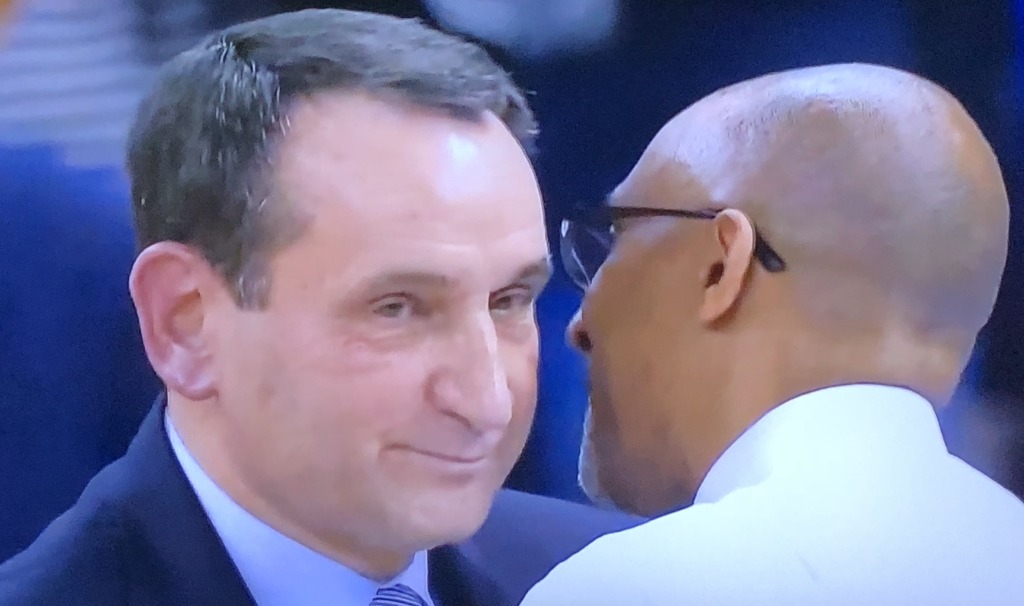 And I heard in her voice that sideline reporter Tracy Wolfson was emotional, too, when she interviewed Johnny after the loss. 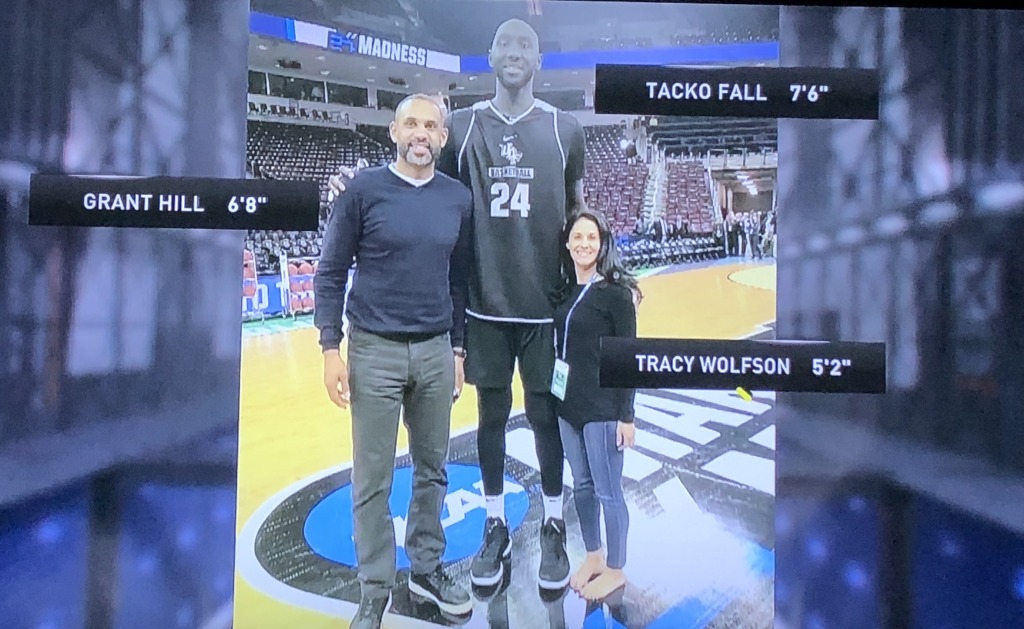 This pic says it all about Tacko Fall’s height! Photo by Karen Salkin. 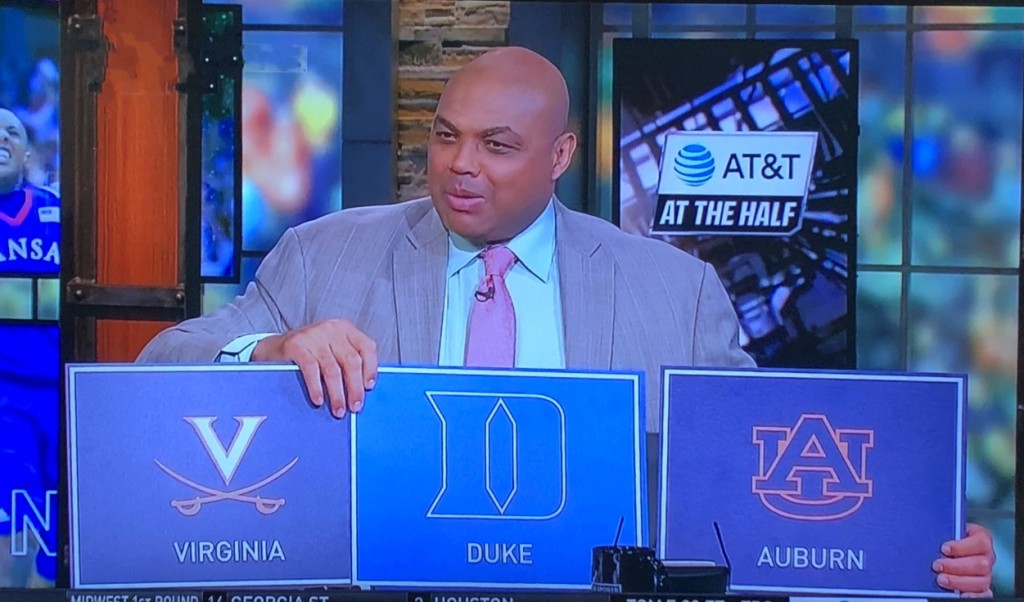 My favorite personality, Charles Barkley, holding signs for who he thinks will win this tourney. It probably will be Duke, but he’s sneaking his beloved Auburn in there! Photo by Karen Salkin.

That’s it for last week! And now we move onto the Sweet Sixteen, which may have been named after what I perpetually am! I have no dog in the race this year, so I’m just watching as an observer. And to watch Charles Barkley analyze. Wait—I am rooting for someone—Charles’ beloved Auburn! I just want to see him be happy. (And not have his team lose to fellow commentator Kenny Smith’s North Carolina Tar Heels.) So, go, Tigers!