I can’t help myself—I love Alex Rodriguez. I don’t want to, because I’m not a fan of cheaters. But I can’t help it. So, in case you missed it, here’s his latest news: 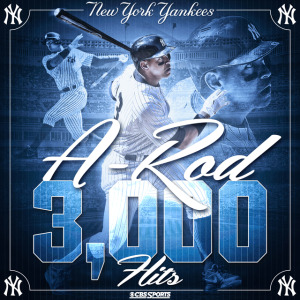 The good news is that A-Rod got his 3,000th hit on Friday.  The bad news, for me, is that–I missed it!!!  I’m sick over that last fact.  I record, and watch, every Yankees game I get on TV, without ordering the complete broadcast package.  (Mr. X always begs me to let him purchase it for me, but then I’d never do anything but watch baseball all day!  As it is, I’m usually a game or two behind in my viewing.)  And, even when their broadcast schedule tells me there’s no game available for viewing the next day, I check again each morning.

But this past Friday morning, I was very stressed, and going through a bit of personal drama, so I neglected to do my usual double-checking.  So, I didn’t know that the MLB Network threw the game on that day, I’m sure, so that, if Alex did, indeed, hit that milestone, we could all see it.  (For the more literate among you, I know—that was not a fabulously-constructed sentence. Nor is this one.)

So, I missed it.  And I could not be more depressed about that fact.  (The irony is that–guess what I was doing when theYankees game was on? Watching the Mets game, on MLB.com! And feeling bad that I was missing the “A-Rod #3,000 watch” that whole week.)

Mr. X came into the room I was in and told me that Alex had just gotten hit #3,000. I could not believe the game wasn’t on. So, I jumped up to see what they were showing on MLBN instead, and, of course, it was the Yankees game. I guess I had done the worst thing in sports that morning—lost my composure. That’s why I neglected to check the listings again. 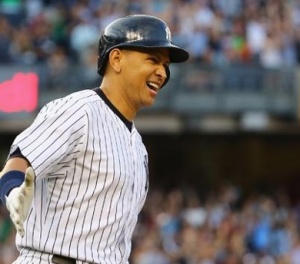 A-Rod rounding the bases for his home run. I’ve never seen him that happy!

So, I quickly recorded the rest of game, assuming they’d show the big moment ad nauseum. (Well, ad nauseum for everyone else, but heavenly for me.) But, shockingly, they did not! I watched every sports show for the rest of the day and night, and they just showed a few seconds of the drama. I wanted desperately to see the whole shebang, from the moment he stepped up to bat and the crowd got ready, to the hit, (which was a home run, as icing on the cake,) to his teammates going nuts, (which they did,) to the salute to the fans, to the camera being trained on him, I’m sure, for a long while after. I finally got to see a lot of that action on-line, but it does not compare to what I missed live. Someone asked me recently why I’m so nuts for sports, in general, and I had actually just begun a column on that very topic. And the drama of that day is one of the main reasons why I love it so much. So, I really, really hated missing it live.

But, as this e-zine states, it’s not about me, so let’s get back to A-Rod’s big day. (For the nescient among you, he’s only the twenty-ninth player in history to accomplish that number! It’s a major deal.)

I loved loved loved his emotional interview after the game. He had real tears in his eyes, and his appreciation of the moment was very genuine. I really do think he’s a changed man after the drama, and trauma, of the last couple of seasons.

I truly believe that he would have wound-up with at least very similar stats if he hadn’t ever used performance enhancing drugs (PEDs.) He hasn’t used them in at least two years now, he’s almost forty, he sat out of the sport for a year, and he’s had his hips replaced, yet look at what he’s accomplishing this season on pure talent and drive!

I hadn’t given his PED use much thought in the past, but now I’m thinking that perhaps it was due to his never really knowing anything but sport, (having been drafted straight out of high school, where he was considered the best high school ball player in the country,) and he was worried about not being all that he was hyped to be. It’s still wrong, no matter how you slice it; I’m just pointing-out that there may have been some psychological reasons behind his actions.

When he got suspended from Major League Baseball for a full year in 2013, and fought it every way he could, (with lawyers, through the player’s association, and in the media,) everybody was against him. Ev-er-y-bod-y! I listened to at least three dozen sportscasters come down on him, with many even reviling him! Even I, a long time A-Rod fan, could not be in his corner. When he began this season, he was booed in every stadium but the Yankees one. (And maybe even a little bit there.) 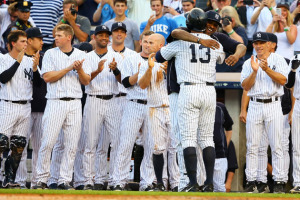 A-Rod’s teamates greeting him after his 3,000th hit.

But he’s really turned it around, both on and off the field, and you’ve got to admire him for that. And I do!

This how much of a fan of his I’ve aways been. I was visiting friends in the Hamptons in the summer of 2007, and watched every Yankees game during my stay. I felt like a bad guest, (because they were doers, not sports-watchers,) but Alex was going for his 500th home run, and I would have been sick if I missed it. When he hit that milestone on Aug. 4, I was crying so hysterically that I actually scared their teen-age son, Taylor. He still mentions it every time he sees me. It’s become like a game to him, to watch me cry. All he has to do is ask, “Hey, Karen, remember when A-Rod hit that home run?” I’m even tearing up now, just thinking about it. It’s stuck-out in Taylor’s mind forever because of my extreme reaction to it.

On a more sour note than even me missing this latest hit of his, (for Alex, anyway,) is that the Yanks refuse to pay him his bonus (that they signed him for) for his previous achievement this year! I really can’t believe that an organization as rich as theirs is being so dishonorable. Hopefully, this latest milestone will push them into doing the right thing. And then, fingers crossed that Alex will follow suit by donating much of it charity, thus validating my love for him.

No matter which way the rest of the season goes for the Yanks, major congrats to Alex Rodriguez. Right now, you the man!