AARON JUDGE IS THE MAN!

I’ve wanted to write about Aaron Judge for about a month now, several weeks before he broke the American League single season Home Run Record with his sixty-second blast this past Tuesday, October 4. But, being a superstitious person, just this side of Rafa Nadal, I couldn’t even start the page. I’m so glad that I can now laud the guy in all his glory. 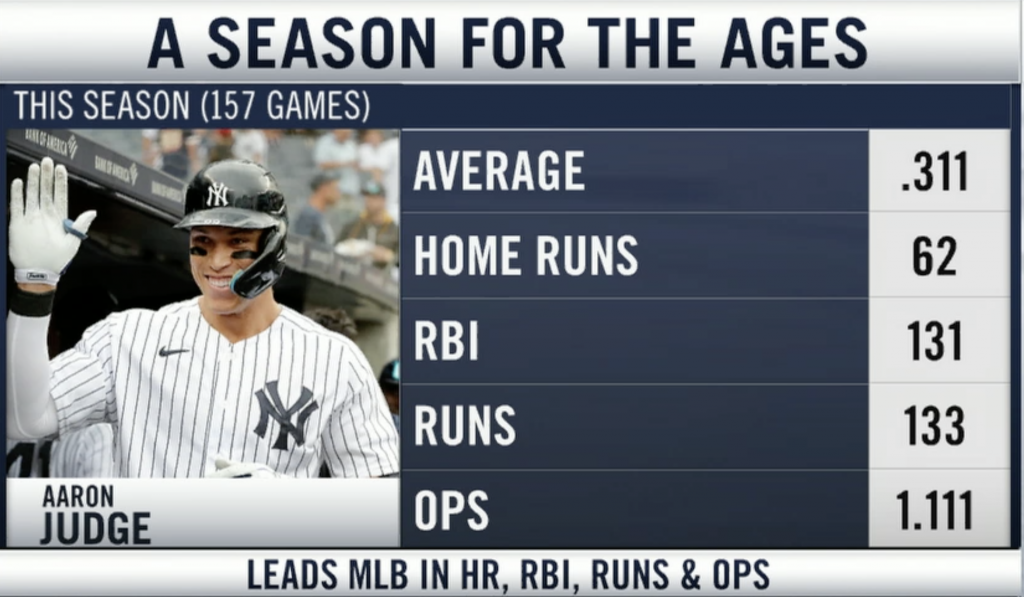 Actually, Aaron Judge’s entire season has been amazing even had he not achieved that record. (I’ll explain why in a second.) For those of you who don’t follow baseball, this is what happened. The American League record for home runs hit in a single season has stood for sixty-one years!!! It was set by Yankee slugger Roger Maris way back in 1961. (There are three higher totals in the National League, but those were all set by cheaters who were using performance-enhancing drugs at the time, so they have never counted to me or any fairness-minded peeps.)

So once Yankee Aaron Judge got on a tear earlier this season, the home-run-record-watch swung into high gear. Many analysts and commentators declared that Judge would smash it, but all said he would not only tie it, but pass it by at least one, thus having the record all to himself. 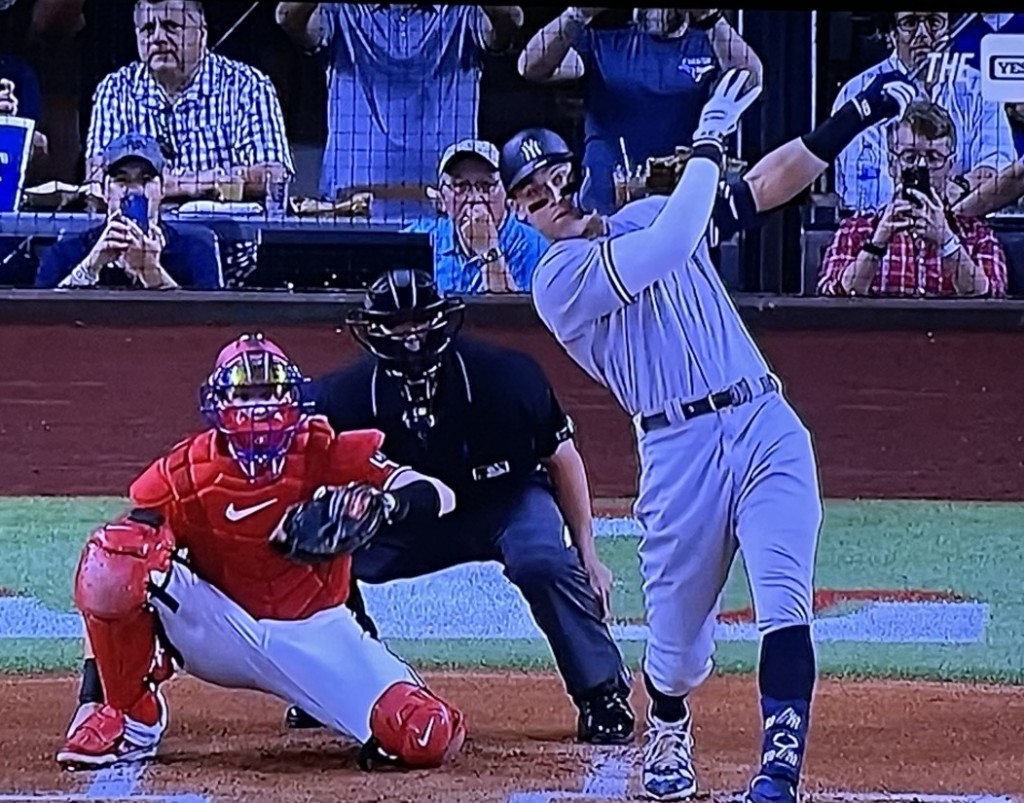 But as the season started winding-down, #60, record-tying #61, and the record-breaking #62 kept getting harder to come by. So, with time running-out fast, when Aaron stepped-up to the plate for his first at-bat in the very beginning of this season’s penultimate game on Tuesday, we fans, both of Aaron Judge and the game of baseball itself, were totally on edge. And then, on the third pitch, he did it! I think I speak for all fans when I say it was one of the most exciting things I’ve ever witnessed in my life!!! Not just in sports, but ever.

Aaron Judge appears to be one of the most humble sports stars you will ever see, but, with all that pressure on him, I feel it would have haunted him if he hadn’t broken Roger Maris’ record, even though he had tied him almost two weeks before the end of the regular season. (Which means “as opposed to the postseason,” for you non-sports fans who are good enough to read this article, anyway.) But his entire year has been amazing–he basically lapped the field in so many categories. This is one of baseball’s greatest offensive performances ever! (And I adore that his OPS is an Angel Number-1.111!) [Note: OPS means on-base plus slugging percentages.]

I believe Aaron ended-up first in every category but one in the American League, and he wound-up second in that one, which is batting average. If he had finished first in that one, as well, he would have earned the incredibly rare Triple Crown. But teams are so afraid of what he can do with a bat that they kept walking him! If you can’t bat, you can’t get your batting average up! Duh. But he seemed okay with that tactic of stopping him from beating them.

One baseball analyst said, “He is everything good about the game of baseball,” and that just about sums-up Aaron Judge. He’s a universally-loved superstar and ambassador of the sport, in every way. As a matter of fact, I think that Aaron Judge should be the logo for all of baseball, the way Jerry West is for the NBA.

Aaron is loved by fans, teammates, and the media alike. And from all the smiles and repartee I’ve always noticed when he gets on base, even his opposing players adore him!

Aaron Judge has been beloved since he first arrived on the MLB scene as a young Yankee. His name alone lends itself to all kinds of “judge-y” things—an area of Yankees Stadium is designated as “Judge’s Chambers,” people chant, “Here comes the judge,” every time he steps up to the plate, and rabid fans even show up in judges’ robes and white wigs!!! If they sit in the Judge’s Chambers, the team even provides those to the ones who want to play dress-up but don’t bring their own. 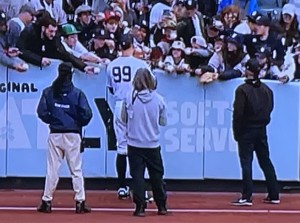 Aaron Judge (#99) flanked by his much smaller minders. (The person behind him is a photog.) Photo by Karen Salkin.

Now, as to his quest for his record-breaking 62nd home run this season, he’s been great about it. He was usually smiling and having a good time with his teammates. He made sure that even if he was really stressed about the situation himself, he didn’t pass the stress of that burden on to them. At their home stadium, he even signed autographs before the games, even though he just had to be worried about himself. What a guy. (The funny thing is that he had two “bodyguards” flanking him during those times, and at 6’7” and 282 pounds, he towered over them both! He could be guarding them!)

While I’m not as locked in to Aaron Judge as I am to, say, Roger Federer, The Stranger I Love Most, or perhaps even A-Rod, (I know, I know—but I cried all day when the Yankees forced him to retire in 2016,) I’ve always liked Aaron. (Of course—who hasn’t?!??!)  But I’ve been totally invested in his journey this season, and have felt for him at every at bat since the All-Star Game. So him first tying, then beating, Roger Maris’ long-time home run record was thrilling to watch. 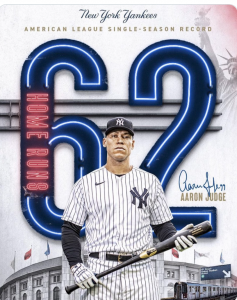 On the personal side of Aaron Judge, perhaps his extreme class and dignity come from his parents, who were both teachers, (as were mine! Hey—it’s the only thing Aaron and I have in common—outside of our love for the Yankees–so please let me have it.)

And speaking of the Judges–I’m not saying this kiddingly at all—Aaron is a major case for adoption. He was adopted at just one day old, and the love that’s apparent between Aaron and especially his outwardly-calm mother has been a joy to see.

So, no matter what happens in the playoffs, (which I hope ends with a World Series victory for Aaron Judge and the Yanks, of course,) I thank the new Home Run King for making this year so exciting for us fans.