Trending
You are at:Home»BASEBALL»BASEBALL: WHAT A MESS BASEBALL 2020 HAS BECOME!
By Karen Salkin on August 7, 2020 · BASEBALL

WHAT A MESS BASEBALL 2020 HAS BECOME!

Last Friday, because twenty-nine baseball players and team staff members (from the Miami Marlins and Philadelphia Phillies) had tested positive for the coronavirus at that point, Major League Baseball Commissioner Rob Manfred announced that if the league and players don’t do a better job of following the safety-from-the-virus protocols, the already-shortened season might be shut down. As well it should! 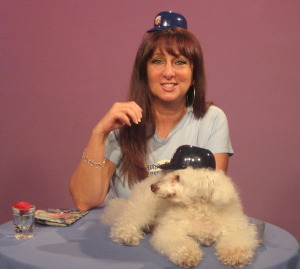 A throwback pic of Karen Salkin and her beloved Clarence rocking tiny caps (that ice cream came in) from the last years of Yankees and Shea Stadiums.

Twenty-nine cases of COVID-19!!! There is absolutely no excuse for Major League Baseball players and crews to be working in a pandemic!

Not only is it dangerous to all concerned, it just looks stupid right now. I explain it all in my latest YouTube video, which includes the story of one of my crazy Celebrity Charity Sports events I participated in back in the day; a softball game at Tampa Stadium, to boot! Here’s the link to all the fun (and ranting!): www.youtube.com/watch?v=Kba4qbSsOMg.

But I still have lots to say on the subject right here. All the virus needs to be spread is one person getting it! And a bunch of other jerks to be in close proximity to that first one. I’m glad to see there are many smart baseball players who are foregoing their season, (and their paychecks,) too. The list grows every day, too, in all sports. (As of this writing, there are a dozen baseball players, eight NBA ones, at least fourteen in pro football, and even a few tennis players who decided to sit out this month’s US Open.) [Update: Shortly after this story was published, it was confirmed that sixty-six NFL players have now opted-out of the upcoming season! Sixty-six! And counting, I’m sure.]

But one would think that all athletes would be the ones who are most cognizant of their health being a priority! That fun and exciting livelihood should not be enough to risk one’s life! 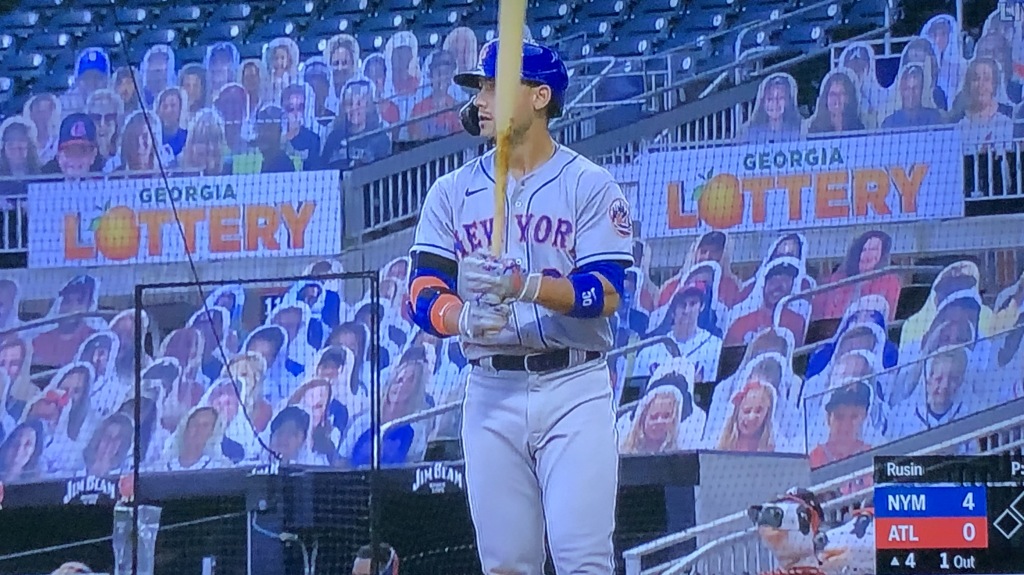 A Met about to bat while being cheered-on by…cardboard cut-outs!!! Photo by Karen Salkin.

A note about the tennis stars, before I get back to agonizing over the current MLB season. Tennis’ bad boy, Nick Kyrgios, though young, is smart enough to withdraw from this year’s US Open, (as did his fellow Aussie, World Number One, Ash Barty,) which is idiotically due to begin on the last day of this month. In explaining his decision, part of what Nick said is, “It hurts me at my core not to be out there competing in one of the sports’ greatest arenas. But I’m sitting out for the people, for my Aussies, for the hundreds of thousands of Americans who have lost their lives, for all of you.” He also wisely stated, “We can rebuild our sport and the economy but we can never recover lives lost.” I can’t wait to see what my beloved Roger Federer is going to do about it. He has four young children, and loves his family even more than he does his sport! But he’s already very old in tennis terms, which means his chances of winning another Major are waning, so he may feel compelled to play. I don’t know whether to hope he participates or not. And therein might lie the conundrum for so many athletes during this evil pandemic.

Now back to baseball. There seems to be a new situation every day. Because players and team personnel keep testing positive for the virus, games keep having to be postponed. In an uber-shortened season! That’s just nuts.

I was super-disappointed to see that California Angel Mike Trout, the absolute biggest star in the league, who just had a baby last week-end, is already back on the field. He must be crazy to risk the health of his very young fam, and for what? The sake of a sport??? I can’t imagine what’s in his head. He had been smart enough to say he would probably sit the season out before the baby was here, so what changed his mind? I’m left scratching my head over this one. 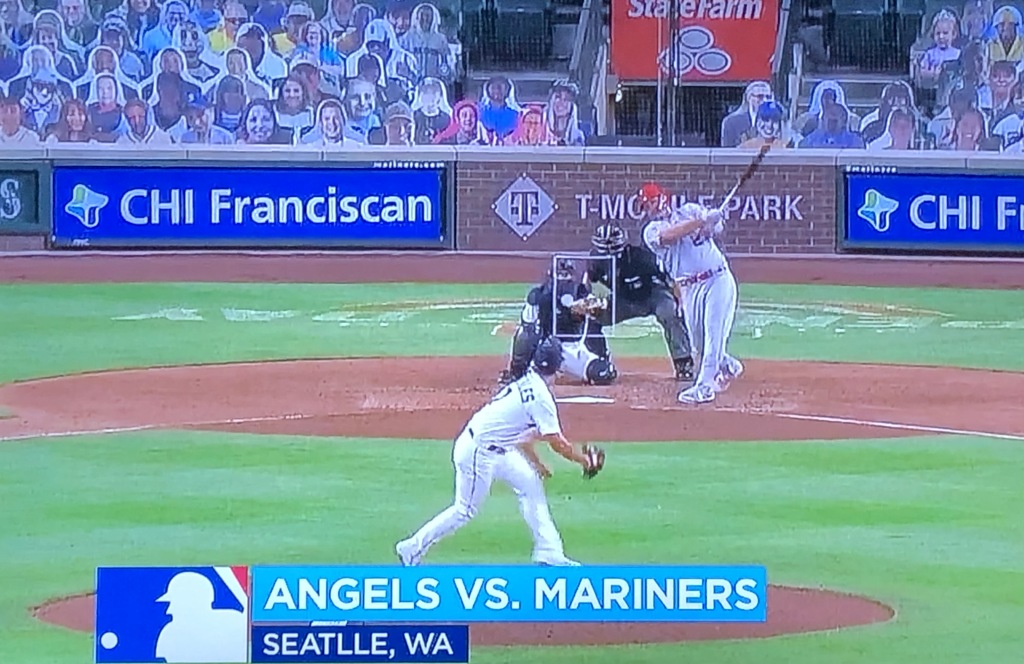 Mike Trout, hitting a home run in his first game back after having his first child. Photo by Karen Salkin. (And, in case you don’t know, that’s Mickey Mantle and Willie Mays at the top of this page. I understand that those were the days!)

And then, amidst all the other craziness in Major League Baseball this year, the Mets star, Yoenis Cespedes, didn’t show up to the ballpark for their Sunday afternoon game in Atlanta! Whaat??? He later decided to opt-out of the season, as well he should. But…he didn’t let anyone know he was leaving! Everyone was worried about him, including the fans, of course. I was really panicking, thinking something awful had happened to him. [Note: I mention him in that new video of mine, but I shot it before he disappeared, so please keep that in mind.]

And here’s a headline you don’t read every year. (Or ever!): “The Field of Dreams game scheduled for August 13 in Iowa has been postponed until 2021.” After initially being scheduled between my beloved New York Yankees and the Chicago White Sox, pre-pandemic, that plan had to be changed because of the the shortened season. So they moved the St. Louis Cardinals into the Yanks’ spot, after they constructed a ballpark at a cornfield in Iowa, right near where the Field of Dreams movie was filmed.

It probably would have been exciting, and something very different for fans of the sport to enjoy in these crazy times, especially because it would have been the first major league game played in Iowa! Ever! But then a baker’s dozen of peeps from the Cardinals organization, including six players, have tested positive for COVID-19, so how could they still plan it? Especially when there could be no fans there. (Unless they hide behind the corn, like the deceased players did in the film. At least that’s what I think they did. The story was all so confusing to me back then.) 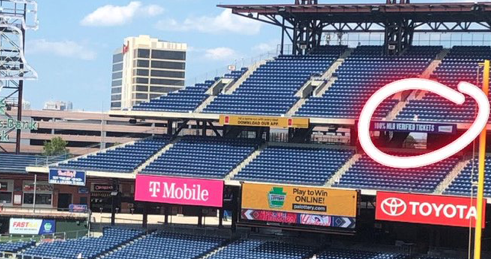 This is clever–in the Phillies stadium, the only cardboard cutouts are of their players who have hit home runs to those spots.

As if all the above isn’t enough, the things the powers-that-be are doing to try to make like everything is normal are downright whacky!!! Cut-outs of people in the stands, crowd noises for some crazy purpose, (I’m sure the professional athletes don’t really need the fake encouragement!,) and the weirdest one—the players being introduced before the games to…nobody! OMG! It might be too depressing to behold if it wasn’t all so comical.

While we wait to see how this summer sport will develop, you may as well watch my baseball YouTube video. Here’s the link again, in case you’re too lazy to scroll back up to the top: www.youtube.com/watch?v=Kba4qbSsOMg.