Trending
You are at:Home»BASEBALL»BASEBALL: THE HOUSTON ASTROS WIN THE 2017 WORLD SERIES!!!
By Karen Salkin on November 2, 2017 · BASEBALL

I could not be happier that the Houston Astros won the 2017 World Series last night, just as a Sports Illustrated cover predicted they would, way back in 2014! I want to buy a lottery ticket with that writer! (I’m sure many other journos wrote that same thing today, but I really mean it!) 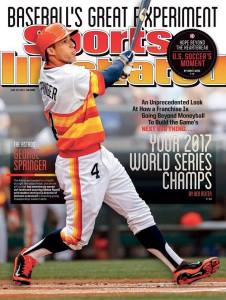 That’s one of the most amazing things I’ve ever seen in sports. And the guy who wrote it, Ben Reiter, didn’t just say that the Astros might win in three years—the headline on the cover read “YOUR 2017 WORLD SERIES CHAMPS.” Unbelievable. And big props to the higher-ups at SI, as well, for allowing a bold prediction like that to stand!

I honestly think that part of why I rooted for the Astros so hard is that I wanted to see such a crazy headline come true, because it’s a good one; not like ones where idiots say the world will end tomorrow, and things like that. This was a really fun prophecy.

But mainly I wanted the Astros to win so that Houston can finally have some happiness this year. I’ve never cared about Texas in my entire life, but, of course, as any normal being would feel, my heart has been breaking for that unfortunate city since horrible Hurricane Harvey devastated the area two months ago. I’m sure the heroics of their baseball team brought so much joy to most of the residents of Houston; it’s a small break from their pain that I pray helps lift their spirits right about now. 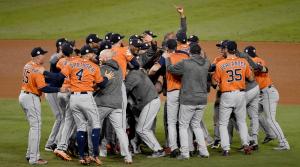 Originally, once the Yankees went out before the World Series, I had no dog in this race. Even though I love actual Los Angeles more than just about anyone else I’ve ever met does, I’ve just never been a fan of our teams. I can’t explain it, except that often, it’s a matter of the personnel. In the case of the Dodgers, a small part of my former hatred of them is because I’ve always been aware that they broke my father’s heart by leaving Brooklyn!

So, I know that some people, (like even Mr. X, for example,) think that I just still hate the Dodgers, so I’d root for anyone against them. But I swear—that is not the case anymore. They’re just another one of the all-but-Yanks-and-Mets organizations that I don’t care about. (Except that I’ll always detest the Red Sox, no matter who’s on their roster!) (And if the Dodgers had played Curtis Granderson in the series, I might have even rooted for them!) 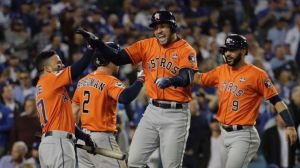 As soon as the Yanks lost in the previous round of the play-offs, I told Mr. X that I still won because I’d have so much time back in my life by not watching the World Series because I didn’t care about it without my Bronx Bombers in it. So I missed Game 1.

I was out (of course) on the night of Game 2, and when I came home, I was shocked that it was still going on, and, of course for a sports nut like me, I got involved in it. And I found myself rooting for—the Astros! Really hard! And I cheered my butt off when they won. 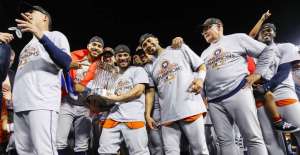 So, I was hooked on the New York-less World Series, (especially Game 5, which was the most incredible game I’ve ever seen!,) and started turning down invitations so I could stay home and watch the rest of the games with Mr. X.

Until last night, that is. I hate to admit it, but I had to attend a big theatre opening night, which I felt I should not try to get out of. (Though, after seeing the show, I wish I had!) So I watched the first inning before I left, and managed to avoid knowing the outcome all night. (Not a sports crowd I was with.) And then I watched the rest of the uber-long game when I got home…at almost midnight! (So, if this article is a tad incoherent, you’ll understand why.) And I stuck through it all, albeit with toothpicks in my eyelids to keep them open! (Not literally, so don’t try it at home.) And sobbed my guts out when the Astros won. (And was still crying a little bit later, even as I got into bed.) 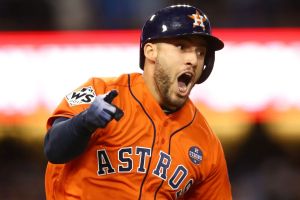 I got so involved with these guys this post-season that I don’t know how I’m going to root against them next year!!! (But when they play my New York teams, you know that I still will.) Many of the Astros are adorable, especially MVP of the World Series, George Springer. I respect this guy so much. I had heard him do a few interviews along the way, and he was so bright and articulate that I pegged him for a future broadcaster. (Not that many of the current ones have those particular qualities, but a girl can dream, can’t she?) And then one day, I really paid attention to him speaking, and realized that…he’s a stutterer! He’s obviously learned the techniques to control it, but you know by now that I’m a detective. So, I did some research on the situation and found-out that he’s a spokesperson for a foundation to help others with speech difficulties. What a guy! And he’s cute, too! Couldn’t hurt! 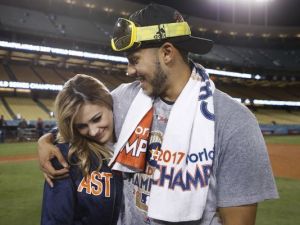 On top of all of this happiness and excitement for the team and city of Houston, and wonderful human interest stories, there’s one more very special moment that happened after the game. One of the Astros big stars, Carlos Correa, proposed to his girlfriend…on-camera, during his post-game interview! He told the interviewer, “Right now, I’m going to take another big step in my life,” and turned around and whipped-out the ring! OMG!!! What if she had said no?! Or they had lost the game?! (Well—duh–in the latter case, he wouldn’t have done it on TV! Or would he?!)

And a quick shout-out to my new favorite panel of analysts: Anchor Kevin Burkhardt, A-Rod, Big Papi, Keith Hernandez, and The Big Hurt. While none of them is quite Charles Barkely (even though Big Papi thinks he is!,) they always kept me entertained. I watched all of their pre-and-post-game shows, and usually laughed my butt off. I can’t wait to see them again next year. (And no—I cannot imagine that A-Rod would be willing to give up his free schedule, and add stress to his life, by becoming the Yankees new manager, so everyone needs to get over that idea!)

I’m still bleary-eyed from it all, so I may add to this write-up later today, or tomorrow, so please check back when you can. And I’m so sorry that I don’t have time right now to apprise you guys of the many special aspects of this game, but if you’re interested, check-out this article: www.cbssports.com/mlb/news/astros-beat-dodgers-in-game-7-to-win-2017-world-series-final-score-things-to-know.

And major congrats to the Houston Astros! You go, boys!!!