Trending
You are at:Home»BASEBALL»BASEBALL: CONGRATS TO MY METS AND MY YANKEES!
By Karen Salkin on October 5, 2015 · BASEBALL

CONGRATS TO MY METS AND MY YANKEES!

For the first time in very many years, I get to be happy with post-season baseball!  Who knows what the play-offs will actually bring, but for today, I’m thrilled to be celebrating the fact that both my Mets and my Yanks are in them!  You go, New York boys! 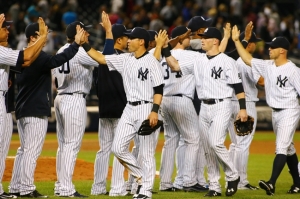 The Yankees on the day they made the 2015 Play-offs.

The 2000 World Series was so hard for me, although what more can a New York fan girl want than for her two teams to both make the World Series?!  The only problem was that they then had to play each other, which was torture for me.  And I was in New York for the entire Subway Series, so I felt all the craziness up-close and personal.  (Like when my friend Andrea and I made a plan to watch Game 2 at the late ESPN Zone, which was located in the heart of midtown Manhattan at the time.  When we got there, with just about an hour to go till first pitch, the line was so long that we couldn’t get in.  So, we had to hightail it to her apartment to watch–in Hoboken!  New Jersey!  I was a wreck.  But, it turned out to be the only game the Mets won in the Series, so I’m glad I was able to concentrate on it, with no distractions from the crowd of strangers.)

That whole 2000 experience was crazy, and a once-in-a-lifetime one.  And I got to live a lot of it with three of my besties from LA, (Lila, Andrea, and Joseph,) which made it somehow more special.

I was also in New York when my beloved Yanks won the 2009 World Series, and got easy access to the victory parade because I had messed-up my ankle and had to wear one of those orthopedic boots, even walking around New York, so all the guards felt bad for me, and got me right up front. Those festivities were amazing, and I’m so grateful to have witnessed it all so up-close and personal.

So, this year, it all starts tomorrow.  The Yankees will play in the American League Wild Card game, and the Mets, who won their Division in the National League, will begin on Friday. 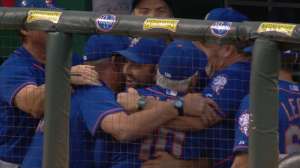 The New York Mets becoming the National League Division Champs, and then celebrating that feat in the picture at the top.

Okay, I hate to say this out loud, especially because Mr. X will torture me about it for the rest of my life, but, if both teams wind-up in the Wold Series again, (knock on wood, from my mouth to God’s ears, ) I have to root for the Mets.  They rarely have a chance like this one.  And they’ve been the most exciting team all year–truly the “Amazins” again!  And the Yanks have already been the Champs twice this century, while the Mets have won only twice in their fifty-three-year history!

All that being said, if anyone reading this wants to give me tickets to see the Mets play the Dodgers out here in LA, I’d be thrilled to take you up on that kind offer.

Whether I get to see any of the action in person this year or not, I wish the very best of luck to my guys, in both leagues. (I have a feeling you don’t tell athletes to “break a leg,” as you do to us actors!) 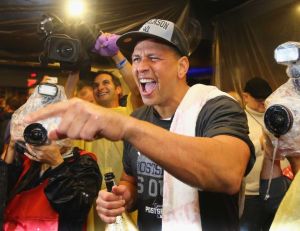 Alex Rodriguez, being perhaps the most grateful Yankee in that celebratory locker room.

I know it’s strange, but I’m especially happy for Alex Rodriguez. He’s handled himself so perfectly all year, and has been such a big asset for the Yanks, that I really do forgive him his past transgressions.

And I’m ecstatic for Mets Captian David Wright, who battled back from major back issues, that he’s actually still dealing with. He’s a true champion for just returning to the field this year! So, I love that he’s made it to the play-offs for only the second time in his career!

And that Mets Manager Terry Collins did, too. His journey is too long to relate here, but it’s a good one. 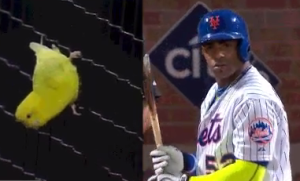 And, having been a fan of Yoenis Cespedes, the Mets MVP as far as I’m concerned, no one was happier when the Mets acquired him in the middle of this season. (Well, maybe except for the canary. Or parakeet, or whatever bird that was.) I don’t think they would have come this far without him, so I hope both his and Arod’s contributions continue throughout the play-offs, knock on wood again. I have a feeling that Yogi will be looking out for his Yanks now even more than ever.

And thank you, Mets and Yankees, for one of the most fun, pain-free, happy baseball seasons ever. You guys rock!