This is not my usual awards show opus; I live-tweeted most of my juicy thoughts on the Emmys telecast and arrivals. (@MajorCelebrity if you want to still see my bon mots there.) I covered as much as I could without getting too far behind in the show. So this column contains fewer of my observations than usual—they’re the ones that didn’t make it onto Twitter last night. 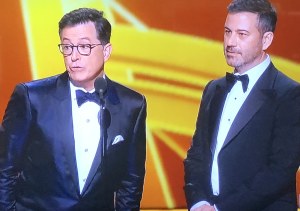 Two presenters who should have hosted instead: Stephen Colbert and Jimmy Kimmel. Photo by Karen Salkin, as is the one at the top of this page.

And there were so many pre-shows that I could not watch them all; I just kept switching around for those three hours. And let me tell you—it was a lot of work! A lot.

But the very stupid “I mean” was out in full force. It seems that no one can begin a sentence without it these days! Idiots. Some of the worst Emmys offenders were Anna Chlumsky, Betty Gilpin, Gwyneth Paltrow, and (I’m sad to say) Milo Ventimiglia.

So these are just some snippets I made notes about. I don’t even have much snark this time! It was all pretty bland, yet entertaining enough. I actually liked it this way.

So let’s get right into it:

The idiot hosts never told us who anyone is!!! How rude of them!!! We were supposed to guess who they were interviewing. With so many shows on TV these days, most people on them are just working actors, as opposed to celebrities. So if a viewer doesn’t watch a particular show, they were lost. Mr. X and I certainly were.

The girl who plays the gay kid daughter on This Is Us was refreshingly honest about how fans act now. She said they just ask for pix or autographs, without engaging. I loved that insight. 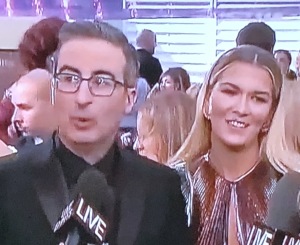 John Oliver and his pretty wife. Photo by Karen Salkin.

Lin-Manuel Miranda is always the most normal, human person in show business!!! I love him.

Could Padma Lakshmi be any more nasal?! To answer my own query—I doubt it.

Terrence Howard is a lunatic. Period. The nutty hosts had no idea how to respond to him!

John Oliver has a gorgeous wife. And he’s the funniest. So I’m happy for him on every level.

I’m so glad that I got to see John Leguizamo’s wife because I had just seen his stage show where he mentions her a lot.

That creepy female interviewer, the one with the giant forehead and anorexic arms, wore a dress that So You Think You Can Dance host, Cat Deeley, had just worn on that show on Monday night!!! How could a stylist let that happen??? And even worse, she always tries to make it about herself, instead of the people she’s interviewing. 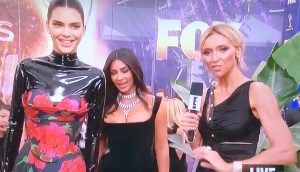 I used to always like Sterling K. Brown’s wife, but now she’s just desperate to be as famous as her husband. She was so upset that the giant forehead woman didn’t mention that she has a show soon; Sterling and the woman had already wrapped-up the interview, but the wife just had to get in her plug after they were already leaving the stage. And she did it in such a sneaky way, making like she wasn’t saying it for her own promotion. Pathetic.

On the TV screen at once were three weirdos, making money they don’t deserve: forehead woman and two Kardashians. Ugh. What has entertainment come to?!

This is another channel that didn’t give us the names of the people they were interviewing! They sometimes said it, albeit quickly, but never wrote it! What is wrong with TV producers today?!

And this channel interviewed barely any celebs at all!!!

Some actress named Greta Lee, (whoever she is) was soooo nasal! And she’s another who cannot begin a sentence without “I mean.” 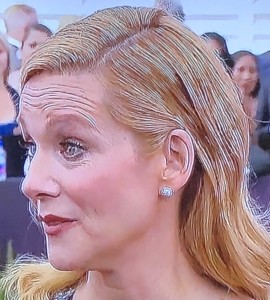 Laura Linney has definitely never done botox. So, good for her! I really applaud that!

I hate to say this one because I’ve met local newswoman Christine Devine a few times, (including a few days ago!,) and she appears to be a very nice person, but she asked one of the dumbest questions I’ve ever heard!  (I actually wasn’t even paying attention at the time, but Mr. X passed by at this point and laughed so hard at the idiotic question.)  She was interviewing yet another obscure working actress, and asked, “How many times have you been to the Emmys?,” to which the actress answered, “This is my second time.” Without skipping a beat, Christine then asked, “Does it ever get old?”  The woman had just said that she had been here only once before!!!  How could it “get old” to her?!

Interviewer Christina Chan has the most horrible squeaky voice!  How is she an on-air person?! On top of that, she interviewed whom she introduced as only “two people from The Marvelous Mrs. Maisel,” and never ever said their names! Such rude treatment.

But this one takes the cake. They totally dissed Oscar and Emmy winner Regina King, whom Mark Steines was interviewing when it was time for the station to go off the air. So instead of letting Regina finish like a lady, they told her to “scoot over” to get their two channel hosts in the picture for them to mention their producers, etc! OMG. Regina was kind enough to stop and speak with them to begin with, (which she was the only really celebrity to do,) and this is the treatment she gets!

This one had the absolutely weirdest interviewers! They included no-talents such as creepy Jenny McCarthy and very creepy Kelly Osbourne (whom I have not seen anywhere in years, thankfully,) and former football player, Shannon Sharpe.  Oysh.

So, I could not even watch it!

This was a pretty painless, eventful-less, easy enough Emmys. Sort-of good, sort-of bland, and pretty on-time. I never need more than that.

And even though I like a funny host, like Jimmy Kimmel, to come out occasionally with a witty comment about what had just occurred, having no host made the telecast shorter. But I felt like this one really needed a host. 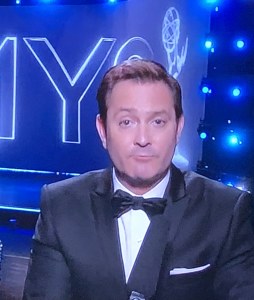 So thank goodness for “behind-the-scenes” commentator Thomas Lennon, who said he would be our “sherpa through the lulls.” That guy is a riot! He’s been one of my absolutely favorite people in show business since I first saw him on creepy Sean Hayes’ ill-fated 2013 sitcom, Sean Saves The World, and the Emmys were so lucky to book him!  He kept Mr. X and me in stitches the whole time. His reference to Felicity Huffman being in prison was priceless!!!

How could they have left Crazy Ex-Girlfriend out of the tribute to shows that have recently gone off the air?! They should have even had its creator and star, Rachel Bloom, be a presenter. Not only did she win a Creative Arts Emmy last week, (for a song she wrote for the show,) but she announced that she’s pregnant, which is always big news in the show biz community!

Phoebe Waller-Bridge’s first acceptance speech was a riot. As were all three of them! Even Mr. X said that she’s “delightful.”

Ken Jeong is a riot. Period. Even usually-boisterous Nick Cannon just stood back and admired Ken doing his thing. 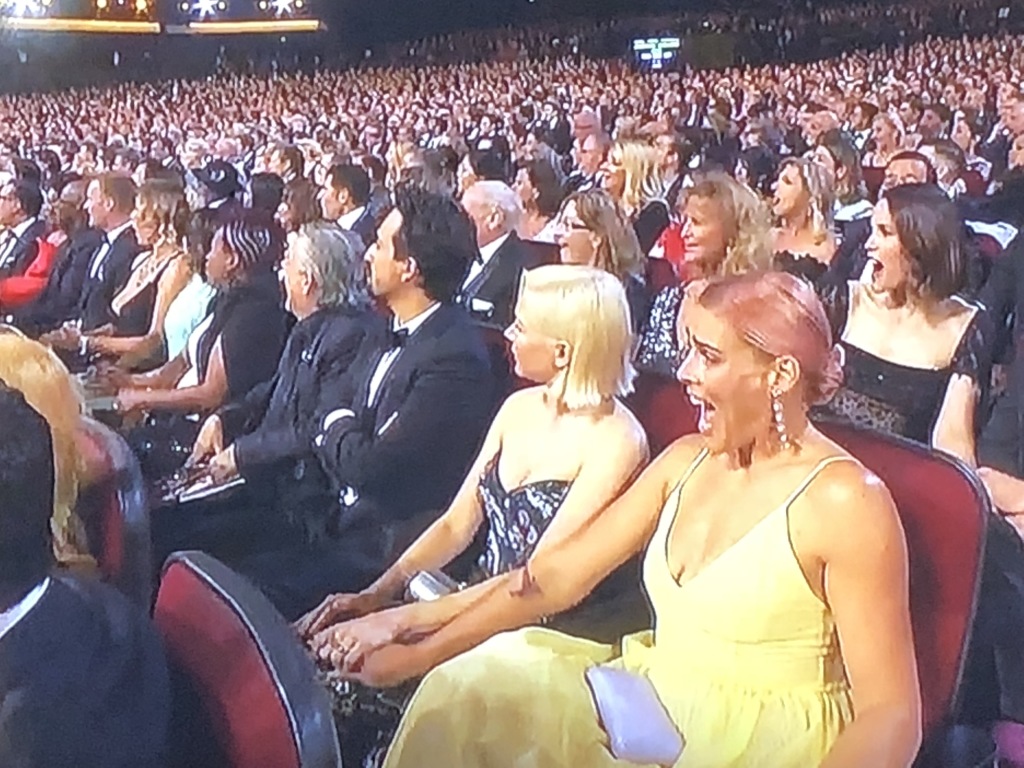 As I tweeted, we get it, Michelle Williams and Busy Philipps—you guys are besties. But do you really need to be holding hands during the show??? Who are you trying to be—Oprah and Gayle? Eww.

And what is up with that crazy clapping of Natasha Lyonne??? She looked like one of Sherri Oteri’s SNL characters! I really thought she was some joke the show was pulling because she was sitting next to funnyman Fred Armisen (who turned-out to be her boyfriend,) and the camera kept showing her. I thought she was going to jump up and throw off what I assumed was a weird wig, and those most un-hip glasses ever, and do a bit! I had no idea that she’s an actress. 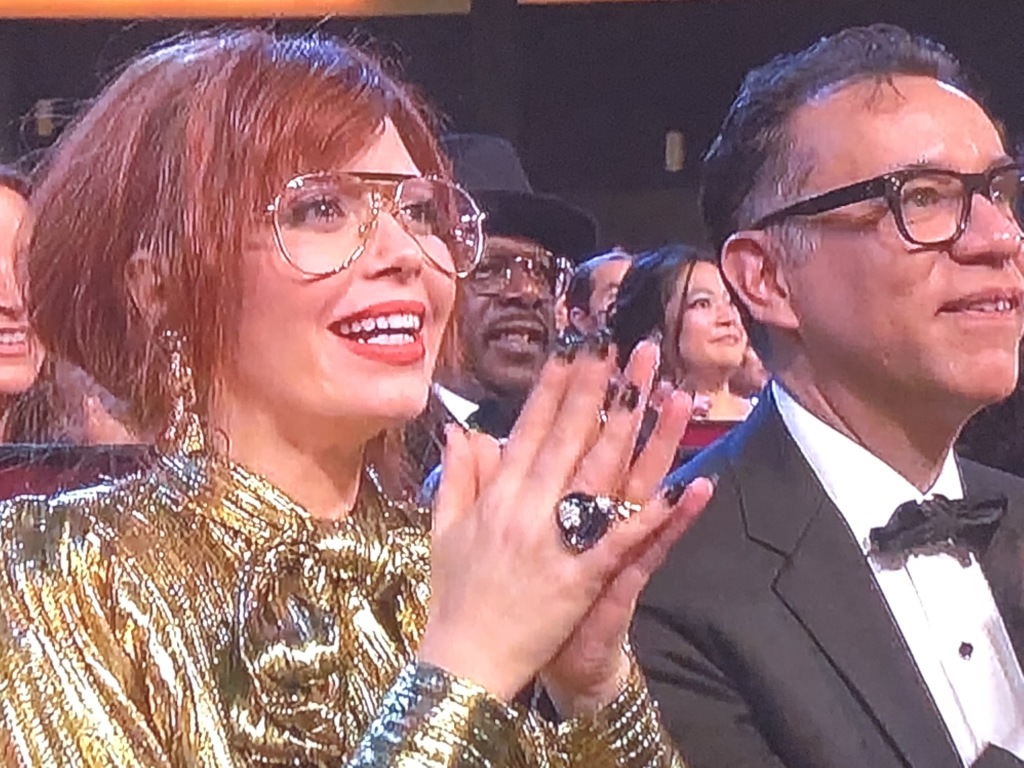 The very weird clapping, and looks, of Natasha Lyonne, with her bae Fred Armisen next to her. Photo by Karen Salkin.

Why would they have someone named Lily Singh come on to utter only two sentences introducing two other people??? What  a waste of time. (But I really do think they were just trying to get an Indian person on the telecast.)

The speech by the British director of Fleabag was lovely.

What a stunningly stupid and rude bit by Maya Rudolph and some creepy guy, on every level, including making fun of having a hard time seeing!!! So offensive. Also offensive was not saying the correct names of the nominees they were announcing! This is the Emmys, for goodness sake, not a high school revue! This might be the only time these guys get nominated in their lives, and they didn’t even get to hear their names!!! And people who are really blind didn’t get to know who anyone is!!! This was one of the rudest bits in the history of awards shows! Shame on those two, and their writers, too.

The actual funniest moment came when plastic-faced Kim Kardashian said, in all seriousness, “Our family knows firsthand how truly compelling television comes from real people being themselves.” Yeah, right. The audience actually laughed, probably thinking, as I did, that it was a comedy bit. But, sadly, it was not. 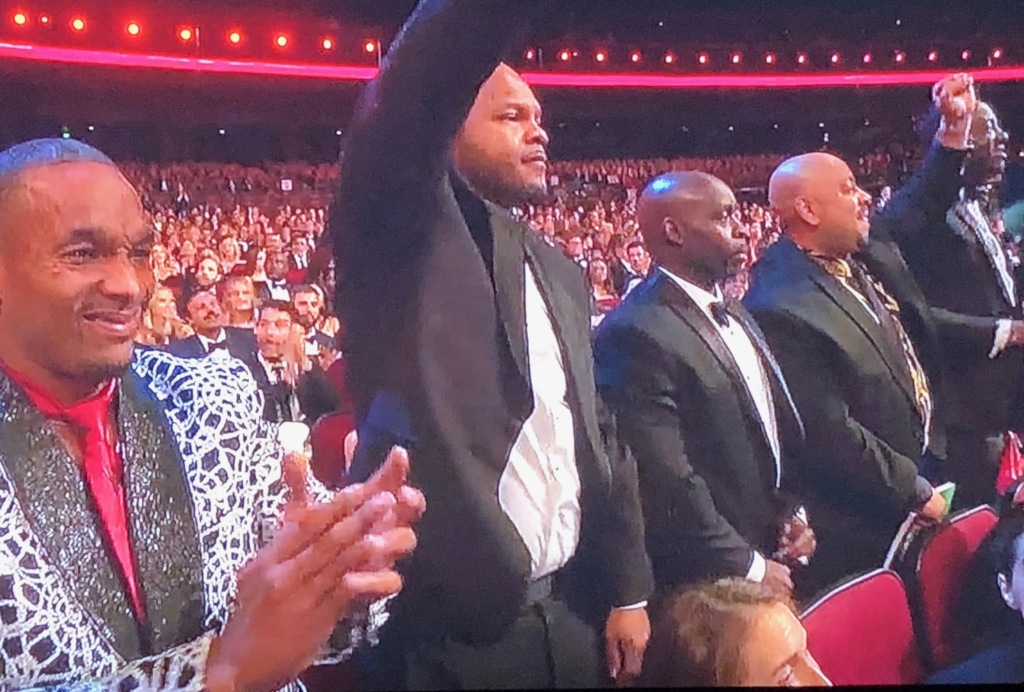 Let me close with this: I’m shocked that the rave-reviewed and loved-across-the-board When They See Us, won only one Emmy, which was for one of the young actors, Jharrel Jerome. It was the hit of this television season, and they were nominated for a ton more, so how could that be? I can’t believe that #EmmysSoWhite has not started yet. But, outside of Thomas Lennon witticisms, (which kept me paying attention all night,) seeing the real “Exonerated Five” standing up and cheering was the absolute highlight of this year’s Emmys for me. It was so moving. I didn’t see the show, because I know the real story and it’s too painful for me, but I cried my eyes out just the same.

[Note: If you have not yet read my column from yesterday, Septemeber 22, 2019, please do so. You’ll be shocked and disgusted by one actor’s behavior reported in it. I promise!]