Sorry that I couldn’t live-tweet my Tonys thoughts last night, but, like an idiot, I accepted an invitation to go out, (which I’ll tell you about, possibly tomorrow.) That put me about ten hours in the hole for the three major events on TV last night! I missed not only the Tonys on-time, but Miss USA and the second game of the NBA Finals, as well!

So, after Mr. X and I watched the Tonys, which was a pretty upbeat, excellent show, I watched the game by myself, which had a very disappointing outcome, (the Spurs lost in the last minute or so,) and went to bed around 4AM! So, I’m also a little behind in getting this group of musings published this morning. Sorry about that. 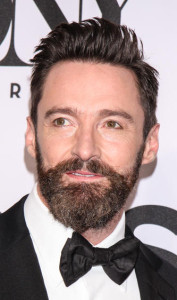 I so love Hugh Jackman, but that beard is repulsive. (So, sorry for foisting it on you guys!)

I was also too exhausted last night to “review” every little second of the awards telecast, so here are the musings I jotted down as the show went along:

Is there anything Hugh Jackman can’t do??? I truly do love that man!

But he must lose that Smith Brothers beard! It was confusing me. (And, as Mr. X pointed-out, it was very distracting.) Does anyone know why he was wearing it?

As clever as it was, I didn’t get the opening hopping bit, except to show how in shape Hugh is, which is actually a good enough reason for me. (I could just see in the production meeting, when they discussed what to do for the opening, Hugh said jokingly that he should just hop the whole thing. And they went with it!)

Clint Eastwood walking through the opening was so random.

Neil Patrick Harris and Rosie O’Donnell got so thin. But why did he color his hair red???

[Very early on, I wrote this:] I’m sure Neil Patrick Harris will win. He’s too popular not to.

Acting winner Mark Rylance gave the best speech I’ve ever heard in my life. It was classy, peaceful, simple, and from the heart. And so apropos of the occasion.

How rude of acting nominee Adriane Lenox (to the people behind her) to wear that hat! I hate people who are so blind to that others are in the audience with them! (I may have to add her to the column I’ve been working on about rude audience members, so please keep an eye out for that one.) 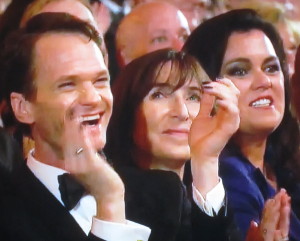 Rosie O’Donnell trying to smile though Lena Hall’s awful speech, even though NPH seems to be enjoying it. Photo by Karen Salkin.

Winner Lena Hall gave a speech that I’m sure she thought was adorable, but it was really annoying and awful. When even Rosie O’Donnell is appalled…

Okay, I usually love a Disney show, but Aladdin looked not too good. Outside of the dancing, which of course I love, it looked pretty weak. I know that people love that genie guy (James Monroe Iglehart,) but he doesn’t sing particularly well, and it’s uncomfortable to watch him move. I was honestly worried the whole time that he was going to have a heart attack. And I could not make-out most of his words because he swallowed the endings.  [Yet, he wound-up winning later, so what’s up with that?] 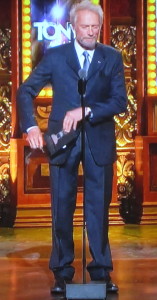 Also what was up with Clint Eastwood’s pants bottoms? They looked like the suit on the little kid at the end of Big!

Winning director of a musical, Darko Tresnjak, gave a nice message to his mom. At the end of it, Mr. X said, “Sweet,” and I concurred.

Kenny Leon, the winning director of a play, said to fans (in his acceptance speech,) “We do it for you.” No, you all do it for yourselves!!! Please, everyone in show business, stop lying. Curing cancer is for others, not directing a play!

Did anyone else notice that Kenny Leon ignored Clint when they were walking off? Maybe he was just in his own moment, but still…

How terrible did Fran Drescher look?  Even worse than usual, like a crazy fat old lady. Which is what she is.

Fran Drescher was so rude to the nominees she was announcing, like it was a joke. I was appalled, as everyone should have been. It was the big moment for the nominees, but I guess she thought it was all about her, which I feel she always does. How did she ever get into show business to begin with, with that nails-on-a-chalkboard voice and speech? Ugh.

How did James Monroe Iglehart win? I think it’s the role, not his performance.

Poor Maggie Gyllenhaal is so homely. And how bad must she feel to have such a nice-looking bro? I feel bad for her every time I see her, even though she always seems like such a nice girl. 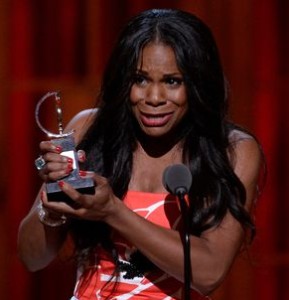 Audra McDonald‘s big moment (it was her record sixth Tony win!,) was as emotional as it should be, but why didn’t she wash her hair for this historic night for her? At least it was great that she thanked Billie Holiday, the iconic singer she plays.

Just when you didn’t think this show could get any gayer, here comes RuPaul.

No wonder Neil Patrick Harris has lost so much weight! What an athletic performance he gave in Hedwig. (That’s a strange show, though. It was one of the things I stayed up even later researching.)

But I would not want to see even one more second of that show. It looked pretty annoying.

Kenneth Branagh looks the same age he did when I first saw him, about twenty years ago! (The funny thing is, he and Emma Thompson were together then, and I thought she looked so much older than he then! It’s all these years alter, and though they’ve been divorced for years, they still look the same decades apart as they did then! And they’re virtually the same age! Go figure.)

I could barely make-out a word that Sting was singing. And he put on a even thicker accent to make it even more difficult!!!

The Tonys have confirmed that they’re desperate for younger, hipper audiences by having T.I. and LL Cool J come out and rap The Music Man song!

I didn’t think I could be more in love with Hugh Jackman, and then he rapped! Back to my original question—is there nothing he can’t do?!

Kate Mara, who looked even worse on the actual show.

Is there even one person in this whole country who didn’t know that Neil Patrick Harris was going to win?

The highlight of the show for me was Carole King, even though I hate I Feel The Earth Move.

Kate Mara looks so hunched-over and creepy. She had bad make-up, dirty getting-ready-to-wash-your-face hair, no earrings, a horrible dress with shoulder pads, and lily white legs. And why was she even on the show to begin with?

Continuing the bad hair theme, why would Rosie O’Donnell go out with that dirty, messed-up hair??? You know she knows hair dressers!

It was interesting that both Fantasia and Jennifer Hudson performed on this show. I wonder if that rained on Fantasia’s parade a bit.

My last thought is that the Tonys are always the best awards show of the season. So why do they have to practically beg for audiences? What a shame.

I just realized—I haven’t mentioned anyone’s fashions! (Except for Kate Mara’s, to the left.) So, I guess the Tonys do lose out to the Hollywood awards shows in the glamour category.