As an actress, I had the honor of voting for the Screen Actors Guild awards, that took place last night. I take these responsibilities seriously, as I suspect few others do, so I saw every film that had a nomination. I didn’t vote in some television categories because I didn’t think it was fair to do so, as I hadn’t seen all the nominated performances. But, on the whole, I was satisfied with the outcomes.

I was actually out last night, at the opening night of Art at the Pasadena Playhouse, which I’ll review tomorrow, so I missed the walk-ins. No big loss; just less to rag on. (Like that new idiot Asian chick who covers the red carpet for E. At the Golden Globes, she actually told very overweight Melissa McCarthy that the reason she herself has such great abs is because she’s busy laughing at Melissa on-screen! Nice comment to a heavy girl.) (And, what makes gray-haired, tattooed, chubbette Kelly Osbourne a “fashion expert”??? If I looked like she does, I’d get a make-over!)

Anyway, here are my observations during the telecast: 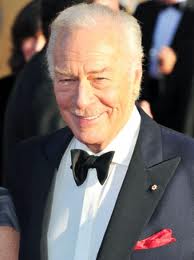 I was happy for Christopher Plummer to win for his supporting role in Beginners, but I voted for Nick Nolte in Warrior, the most under-rated movie perhaps ever! I don’t know anyone else who even heard of it, maybe because the topic was Mixed Martial Arts. But if you want to see acting how it’s supposed to be done, run out and see it. Not only was Nick brilliant, but so was the rest of the cast. [My long overdue review should be published here next week, so please check it out.] Jonah Hill, in Moneyball, and Armie Hammer, in the dreadful, waste-of-time J. Edgar, didn’t deserve to be in this category with the other three. (Kenneth Branagh as Laurence Oliver in My Week With Marilyn was the other deserving nominee, whom I was planning to vote for until I saw Warrior.)

I just realized that I’m only one degree from Chris Plummer!!! His first wife was the eccentric Broadway actress Tammy Grimes, with whom Mr. X starred in a play in Toronto several years ago. She became one of my favorite afternoon tea partners; it was fun to hang with someone who was even kookier than I!!!

Was gorgeous Mexican actor Demian Bichir, who was nominated for his work in the excruciatingly painful A Better Life, a gardener before he became an actor, like we actors from the United States are waiters first? I always think it’s funny when we wind-up playing waiters, and he wound-up playing a gardener! 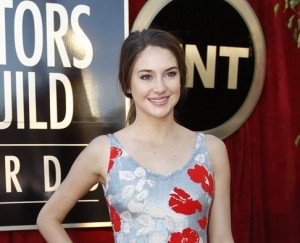 Shailene Woodley’s hair looked like she just came from the gym.

Remember when black women could play only maids in movies, and it took decades for them to be able to play other roles? Well, Octavia Spencer won for doing just that! How come no one else mentions this irony???

My fellow actors who voted for creepy Alec Baldwin are idiots! He’s rude and thinks he’s more important than everyone else. (I know from experience.) The winner should have been any one of the other guys, but I really thought the union would reward Steve Carrell for this being the last time he could win for The Office. And because he’s a good guy! And how was Jim Parsons not nominated for male in a TV comedy???

Betty White looked great! Her outfit was cool and perfect. And she’s so funny without pushing it or even planning anything.

I love that the Bacons presented together! Award shows never have people who even know each other present together, for some strange reason; it’s like seating strangers together at dinner parties, which drives me crazy. [Note: Kevin Bacon and Kyra Sedgwick are married, for those of you who read about only the couples who don’t make it.]

I’m so glad that the deserving Modern Family won, but they shouldn’t have let the kids do that really unfunny bit as their acceptance speech. Especially since all the grown-ups on the show are funny, and we really wanted to hear them.

I have never before noticed that the SAG Award statuette has a tiny semblance of a male unit!!! Gross. He also has no face!!! I know that’s so he can wear a mask of comedy or tragedy, but it’s just creepy. I guess I should be glad that I’ll never win one! My Marvy Award (don’t ask) is weird enough.

I didn’t see the other ladies’ performances in the TV movie category, but Kate Winslet, as Mildred Pierce, did not deserve the win. Perhaps she agreed with me because she didn’t show up.

Zoe Saldana did look great, even though she always seems like she thinks she’s all that.

Paul Giamatti just does nothing for me. I never understand how he wins anything. Maybe at the beginning, when perhaps the voters felt sorry for him and figured it’s his one chance at it, because actors who look like him usually don’t get the main roles, but they just keep on coming. The roles and the awards! That one’s a head-scratcher for me.

Ken Howard‘s rant about the merger of SAG and AFTRA was out of place on a nationally-televised basic entertainment show. Nobody who watches it gives a rat’s ass about the merger! It was a very inappropriate venue for that announcement. And it’s not even a done deal! Or even one that all the members of both unions want! Save it for a union meeting, not national television. Don’t waste the public’s time.

I love that Dick Van Dyke proudly mentioned that Mary Tyler Moore came to our attention on his show when she “was just twenty-three!”; nowadays, a gal can’t get a job as a sitcom wife unless she’s been on series TV since she was twelve!!

Mary looked great, especially for what she’s been through health-wise for the past couple of years. But I have a horrible feeling that she can’t walk because this was the second show recently where they had her positioned at the podium so we didn’t have to see her walking out.

The tribute to MTM reminded me of this: when I started out in show biz, I thought of changing my name to Karen Tyler Moore. (Looks good, right?) Then, when people would ask me if I was related to Mary, I’d just look humble and say, “I’m trying to make it on my own.” That way, I wasn’t lying (which I abhor,) and hopefully, the powers-that-be would assume I was, and try to help me! Clever. But I wanted my parents to get credit for any success I had, so I kept Salkin. Perhaps not the best move, especially since, because of my show, Karen’s Restaurant Revue, everyone just called me “Karen” and never even knew my last name! Kind-of like “Cher,” though not by my design.

Jessica Lange‘s dress was awful. It was the color of warm dog poop, the top didn’t fit over her boobs correctly, and it was so low-cut that it featured her crepe-y chest. Even though she’s aged perhaps the worst of any female in show biz today, she really can do better with her attire.

Steve Buscemi‘s uttering, “To my fellow nominees um, congratulations” was the most insincere, obligatory reading of any winner ever! It was best left un-said. 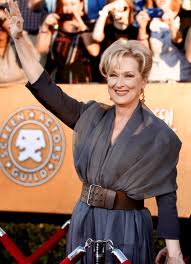 I actually loved Meryl Streep‘s semi-matronly outfit, which I’m sure no one else did. It was classy, comfortable, and no nonsense.

How was Larry Hagman able to talk on a Sunday??? When I was first starting out in the biz, Mr. X took me to a very show business private party at David Wayne‘s house, with lots of older famous people. I was in awe. We wound-up sitting on the patio with Larry, who was rocking a fez. That was weird enough, especially to an impressionable young girl, but I noticed he wasn’t talking. Or even laughing, when we all were. He just smiled a lot. Seeing my obvious confusion, one of the other guests explained that Mr. Hagman didn’t talk on Sundays! Combined with the fez, I thought it was some kind of strange religious ritual. But no—it was a self-imposed rule. One that everyone wishes I would follow!!! Every day of the week!

Adorable winner for The Artist, Frenchman Jean Dujardin looked so much older in the film, which is how they did look way back in the day, in the era this film was set in. It’s so interesting. But his hesitant acceptance speech revealed why he made a silent film!!! 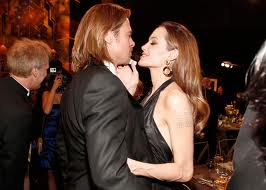 Brad Pitt and Angelina Jolie appear to be so lovely. They were so happy for Jean, even though he was up against Brad.

This next sentence I actually hate writing, but I do want to be credited as the one to have written this first (although, shamefully to other journalists, I never am.) Okay, here goes: I hate to be the one to bust her because I love her, but I think Angie had her eyes done! I’m pretty sure I saw those surgery scars when they did close-ups of her chatting with Tilda Swinton at the end. And perhaps a slight face lift. I hate myself for pointing it out.

I also hate that this show says “actor” for females. As Mr. X asked, “When did ‘actress’ become a derogatory moniker???” There’s “actor” for men and “actress” for women. Period. Nothing wrong with it.

Viola Davis‘ left eyelash was falling off during her acceptance speech. Her win was quite the surprise after Meryl Streep and Michelle Williams shared the honor at the Golden Globes in the same category. As a fellow Rhode Island College alum in the Theatre Department, helmed by Dr. P. William Hutchinson, Viola and my mutual good friend still, I was glad to hear her mention the state.

Did anyone else notice that Owen Wilson looked stunned when The Help won for best ensemble over his Midnight In Paris???

That’s it. So we have only the Grammys and Oscars to go this season. I have to go sharpen my claws for those.