[This week’s columns will all pertain to the Emmys, mainly the suites. So next week will feature reviews of recent play openings, fashion shows and events, and some more fun celebrity sightings, so please don’t miss those, as well.]
Last night’s Emmys telecast was basically fine. Or maybe I’ve mellowed. Thankfully, for all of us, I don’t have as much as usual to report on them.
And, strangely, I have to wonder just what is becoming of me. I feel bad writing anything negative about anyone anymore. But I’m not making these statements maliciously; rather, I’m just saying what everyone who’s watching is thinking, I’m sure. But I still feel bad, so I cut back a bit.
And, trust me, I know what I look like, too, so I can rag on the looks of others. Especially in show business, where they, or their handlers, should know better. Have some of them never heard of a dentist???
So, let’s get to my notes already, (taken as the evening went along,) beginning with the red carpet:
As chatty as I can be, I hate inane small talk. Especially the phony stuff that’s the lifeblood of these show biz events.
I can’t take the phony-ness anymore.
Who is this inane woman on the local ABC coverage, who got hysterical with phony laughter? When Eric Stonestreet almost said “threesome,” she laughed like a lunatic and said, “Oh my gosh, went there.” [I later found-out her name is Rachel Smith. Where do they find people like this??? ABC had the worst ones, like the one below, as well.]
This other woman on the same channel, Roshumba Williams, said, “I’m all about fashion,” while she looked dreadful! (I had never seen her before, so I looked her up, and saw she used to model! I don’t get that one at all.) There were way too many annoying things about her to write them all.
On the other hand, Joey Fatone was an excellent interviewer, especially having to deal with that Williams woman. He’s the only one who actually ended the conversations, rather than just turning away from the celebs. And he thanked them, too!
Anne Sweeney, the president of ABC, actually looked the best of everyone! She has a very inviting face; she looks like someone I’d choose as a friend. 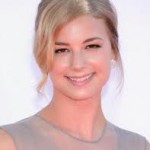 Emily VanCamp. She's good-looking, despite the individual feaures being flawed. (But she looks worse in bright light.)

As a fan of Revenge, I was happy to see that star Emily VanCamp‘s nose is even worse than it is on the show, where I’m assuming they try to shoot around it. I actually really appreciate it because there are so few actresses other than moi who kept their original schnozes. Very brave of her. (Actually, her whole face is a mess, with droopy eyelids, thin-ish lips, weak chin, and not great teeth, but it all works, somehow. You go, girl!)
Rico Rodriguez–what an enthusiastic kid!
Why does ABC’s Chris Harrison have to try to get into the comedy with everyone? He’s not funny, so he has to stop trying so hard.
[Note: as you can perhaps tell, I wound-up watching only ABC’s walk-ins coverage: I tried to do E!, but just could not handle their personnel anymore, and life’s too short to force myself to do it.] 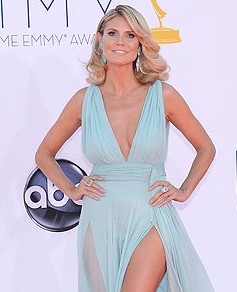 Heidi Klum. See what I mean?

I recently got into Heidi Klum, (because she seemed so nice and sincere on Katie,) but I do have to point out that her boobs were hanging down to her waist!!!
ABC’s now-national coverage had Heidi on just to listen the the fashion host???!!!??? How rude!
Michael J. Fox told interviewer Josh Elliott that he had already lost in both guest categories he was nominated in. A few minutes later, Josh emphatically ended with, “Best of luck twice over tonight!” Great interviewing skills there.
Julianne Moore, who played Sarah Palin this year, mispronounced “electoral college” as “electorial.” I guess she’s still channeling Palin! 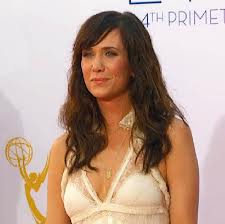 Kristen Wiig. Her hair looked even worse in the back!

Kristin Wiig‘s hair looked like mine if I let it dry by itself! I wouldn’t wear it like that to the market in the Valley, let alone to an awards show…where I was nominated!!!!!!! (Right after I wrote this, Mr. X came in and said, “Eww. Her hair looks like yours when you’re waiting for me to flatiron it.” But maybe that’s more about us than you need to know!)
I know I say it every year, but Sophia Vergara is just adorable.
Melissa McCarthy wore long, black sleeves… in 125 degrees! Nice choice.
Stephen Colbert–what a sweet, pretty, natural wife!
Elizabeth Moss is not good-looking to begin with, and now she made herself blonde, which makes her all…beige.
I think I liked Aaron Paul‘s fiancée. I never saw an attractive, non-famous girl wear long brown sleeves to an awards show! Very down-to-earth of her, making it not about her at all.
I never looked at Christina Hendrick‘s boobs before, but they look deformed, especially with her small head. (And dreadful teeth.) Why would she play those up??? 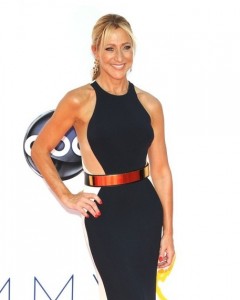 Here’s a nice comment!: this was the absolute best, by far far far, that Edie Falco ever looked! I never thought I’d be jealous of anything physical about Edie Falco, but she has great arms!!! I wish I had ones like that! Where does she find the time to work-out so much?
Now to the show:
Jimmy Kimmel was excellent as host. That was a great line about Chick-fil-a and Republicans! I love that he was political.
When they cut to her in the audience, Cat Deeley was just as phony as on SYTYCD without even saying a word!
I didn’t know who two women in the audience were, but when I saw their teeth, I correctly surmised they were from Downton Abbey!
I feel bad pointing-out this next one, but I must: I was wondering how Steve Buschemi‘s wife could kiss him with those teeth, but then I saw that hers are worse! Why wouldn’t someone let them know, since their mirrors obviously don’t?
Eric Stonestreet’s speech, encouraging actors to keep going, actually got me verklempt. It was perfect; non-preachy, just educational. 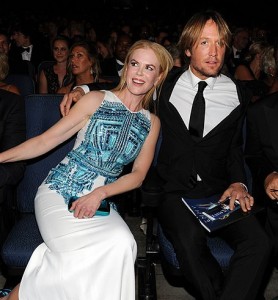 Nicole Kidman‘s a genius! (Or her stylist is.) She wore a dress that had a big white bottom and sparkly turquoise top, and was seated in the front row; she was the only audience member anyone noticed in long shots!
Zoey Deschanel is cute, but she needs to stand up straight, no matter how ditzy she is.
Hey, Don Cheadle–wake up!
Rita Wilson was chewing gum!
Steve Levitan gave the best speech. As usual.
I didn’t know who Mindy Kalling is, but I keep seeing promos for her show, and was willing to give it a try. But that munchkin voice is just horrible! I thought my glasses were going to crack! (On a side note, her little head belies how big her body is.) 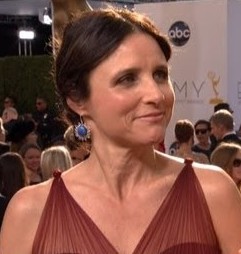 Is this Julia Louis-Dreyfus or Ruth Buzzi?

I think Jon Cryer was genuinely shocked by his win. Jim Parsons really deserved it for his acting, though, but I was still happy for Jon because of all he went through last season with Charlie Sheen. I think the voters were more sticking it to Charlie than voting for Jon.
I was also happy for Julia Louis-Dreyfus, but why was she disguised as Ruth Buzzi?
What a fun speech she gave!
I love when people are really funny, like what Julia and Amy Poehler did. That takes thought. 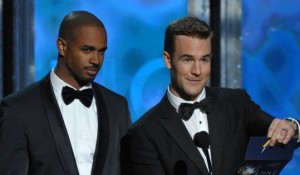 Regarding James Van Der Beek and Damon Wayans, Jr. standing side-by-side: I can’t believe that those are both called heads! Mr. X said that James looks like a character out of Dick Tracy. Perfect. I had been thinking Gaston or Dudley Do-right. (Or the elephant man.)
I’m so glad that Seth MacFarlane dressed-up. I mean it.
But I hated his rude Brian Dunkleman joke. Enough with those already. 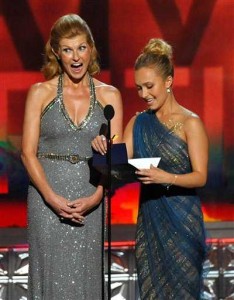 I’ve never seen Connie Britton before, except for maybe a second, but she looked much older than I thought her to be. Maybe she shouldn’t stand next to Hayden Panettiere. But they are starring in a series together now, so that might be hard to do. [I’ve since looked her up, and she’s only forty-five. But last night she looked sixty! Note to young girls—stay out of the sun!!!]
Conversely, it was the best Hayden ever looked!
The “head situation” redux (see five comments above): Suburgatory‘s Jane Levy and he co-presenter, who was an Indian guy I’m not familiar with. (If any of you know who he is, please let me in on it, in the Comments section below.)
Ricky Gervais was a riot!!! As usual.
Kerry Washington‘s another one with a giant head and little skinny body.
I thought Tom Berenger was Ryan O’Neal.
And just what was Tom Berenger talking about???
Seeing Andy Griffith and Opie talking in a clip, then Ron Howard appearing on-stage as the old man he is now, got to me a little. That surprised me because I never watched their shows. But my mother loooved Matlock. Of course.
I’m surprised that Kevin Costner had something emotional to say, even if he didn’t say it emotionally. He said, “I’ve loved being an actor, I’ve loved this life. It’s changed my life, I don’t know what I would do if I didn’t have it.” Very interesting.
And that’s all I have to say on the topic! Tomorrow, it’s on to the gifting suites, where, trust me, everything I have to say is positive.
Share. Twitter Facebook Google+ Pinterest LinkedIn Tumblr Email