Trending
You are at:Home»AWARDS SHOWS»AWARDS SHOW: (THE LESS THAN) GOLDEN GLOBES 2021
By Karen Salkin on March 2, 2021 · AWARDS SHOWS

I apologize to my readers and followers for not live-tweeting, (or any tweeting!,) the Golden Globes the other night. I just didn’t have it in me this year, for several reasons.

First of all, true as it may be, this does not feel to be the appropriate time for snark. (So I’m not even going to rag on anyone’s rags in my observations below. That must be a first! And, hopefully, last.) 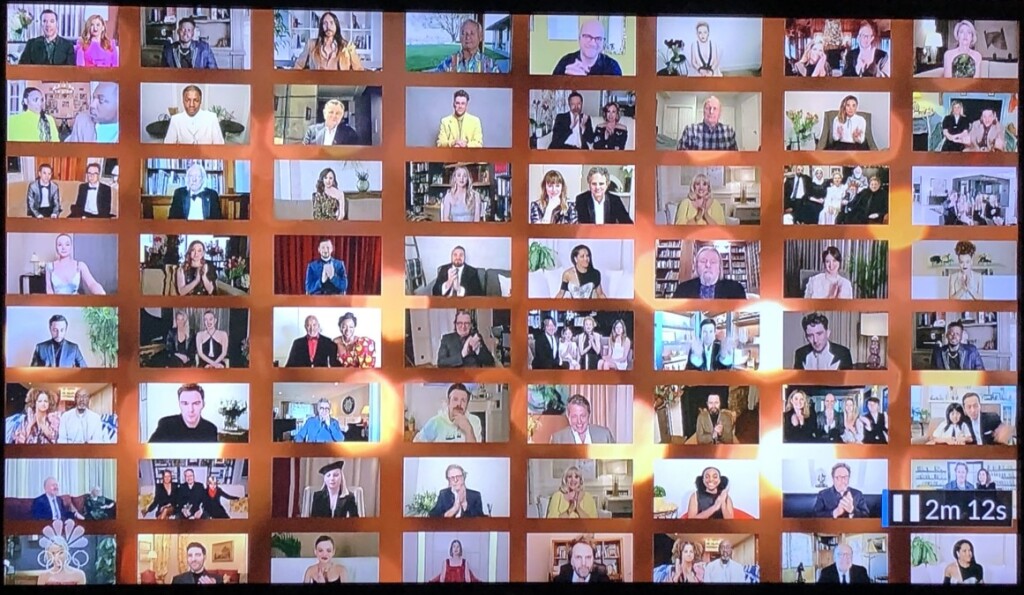 The nominees, all dressed-up at their homes or hotels, on the giant Zoom screen on stage. (Can you pick-out the people they doubled up on?) Photo by Karen Salkin, off the TV screen.

Secondly, no matter what one says these days, it’s pounced upon. So it’s almost not worth it to offer any opinions. They are more often than not misinterpreted, either accidentally or on purpose. (For example, when I tweeted how shameful it was of comedian Dave Chapelle to have smoked a cigarette during his recent SNL monolog, several people accused me of being a racist, rather than seeing my true and obvious purpose of saying that not only was that rude to the close-by musicians and masked audience members, who were already uncomfortable in the breathing department, but he was setting a terrible example to people watching, especially impressionable teens. It had absolutely nothing to do with race. I say the same about all smokers, especially such public ones. Trust me,  dying of lung cancer is horrendous.)

My other reasons were technical. I haven’t been writing columns as regularly as in pre-pandemic life, (when INAM was a regular five-day-a-week e-zine,) so I forgot that I’ve been live-tweeting awards shows for the past decade or so, until right before the Golden Globes began on Sunday night! On top of that, my laptop died a few weeks ago, and I’m not getting a new one until I feel comfortable being in a store again. And I can’t watch TV and be on my desktop computer at the same time. Ergo, no Golden Globes tweets. 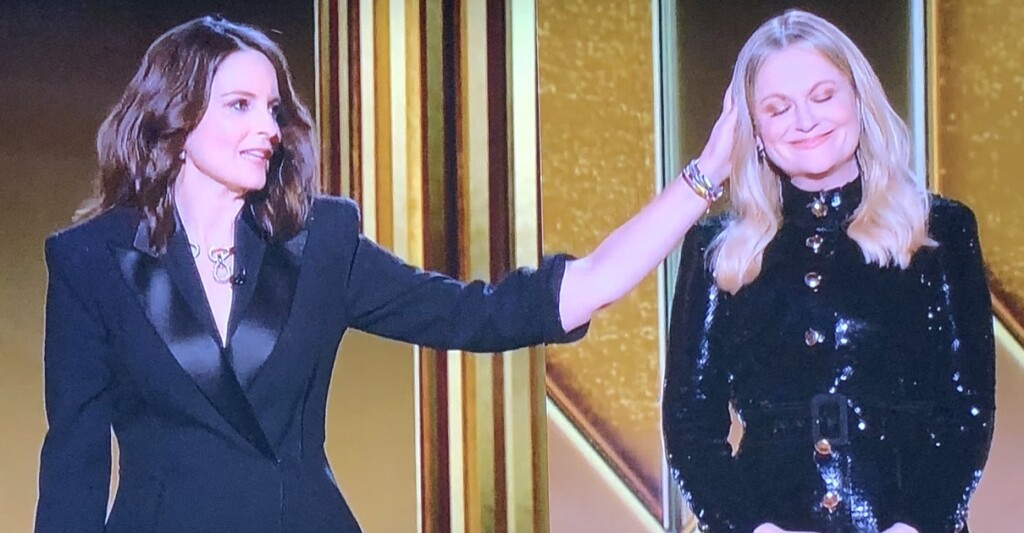 Tina Fey and Amy Poehler co-hosting from opposite coasts. That hand gag was a good one. (It’s not Tina’s hand, in case you didn’t notice.) Photo by Karen Salkin, off the TV screen.

And then I realized the next morning that I did want to share just a few of my thoughts with you, mainly because I remembered that my proofreaders, and others, always thank me for writing about these shows so they don’t have to watch them themselves! (But I’m sorry that I didn’t take any of my usual plethora of pix this go-round since I had no idea I would need them now!) I took no notes at all, so these observations are in no particular order: 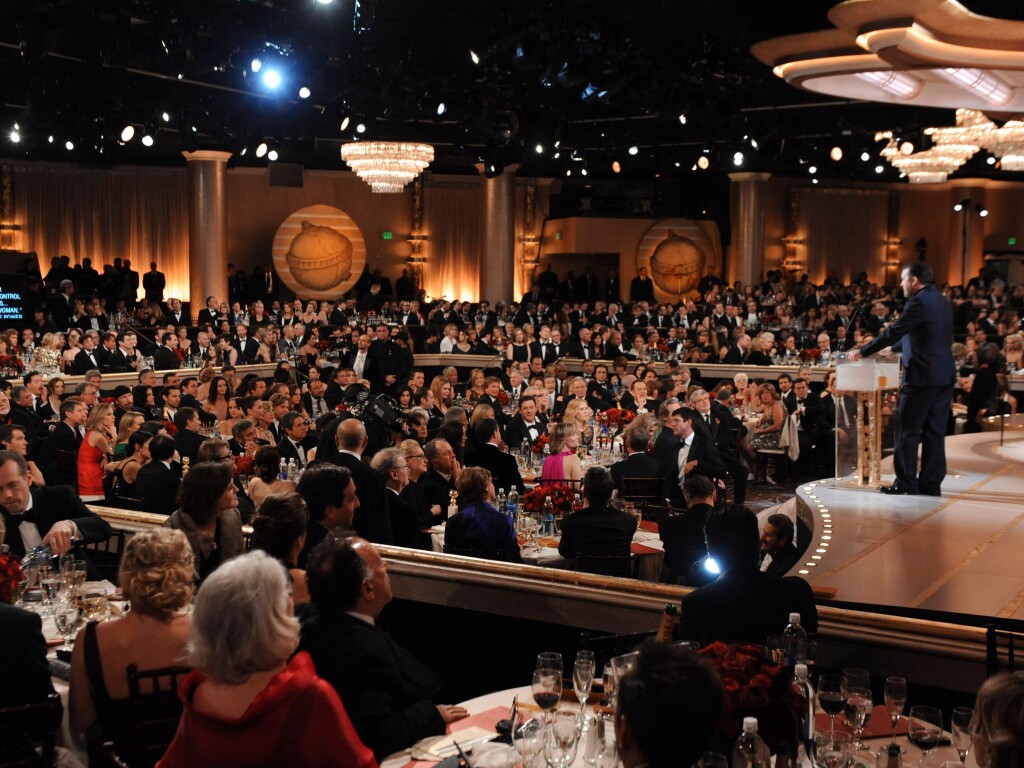 I respect that they still wanted to go ahead with at least some sort of show during the pandemic, but it all just looked so sad to me. As someone who’s attended the Globes before, and have also been to all the parties on other occasions, the scene the other night got to me. When they first showed the tiny quiet audience, as opposed to the usual mingly bustling one, I just started crying. I couldn’t help myself. It really hit me that, no matter how good-natured I’ve been about staying in the house for the past eleven plus months, life is really sooooo very different than it was just a year ago at this time. And then when the hosts announced that the audience was comprised of first responders, I really lost it. I was a blubbering mess for a little bit there. 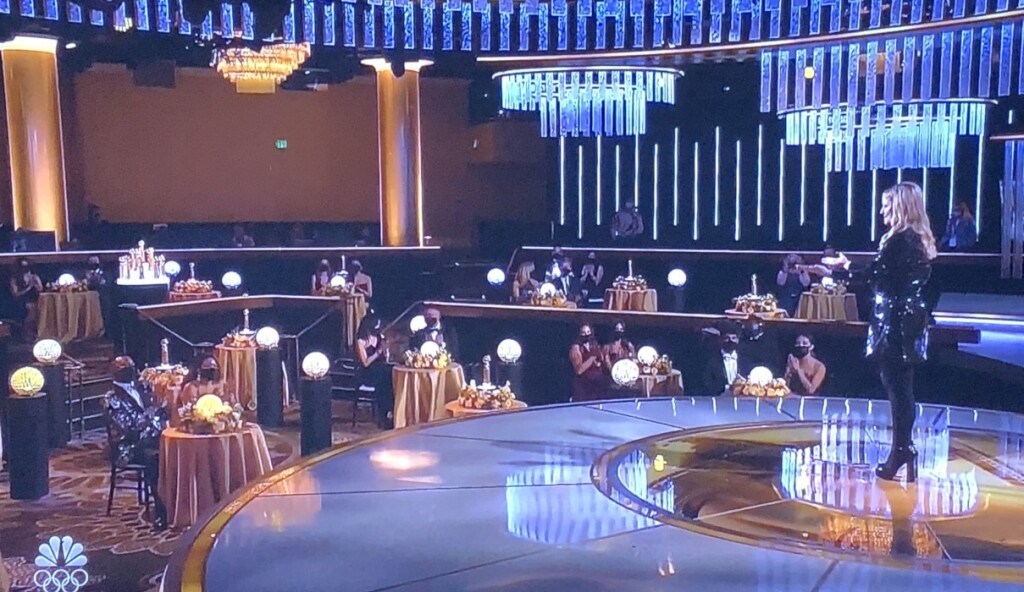 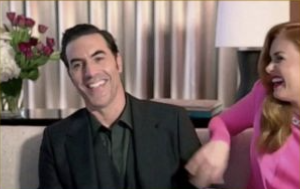 Sacha Baron Cohen and his wife, Isla Fisher, look as surprised as the rest of us when his film, the Borat sequel, won for Best Comedy Picture.

I predicted almost all of the winners, except for Borat. Those two took me by surprise. As much as it’s not my cup of tea, I adored Sacha Baron Cohen‘s speeches. (And I’ve never been a fan of his until that very moment.)

I’m so happy for Andra Day, even though all I’ve seen of The United States vs. Billie Holiday so far is the trailer. But I said from just that little bit that she deserves every award in the book for that portrayal. But shamefully for my fellow thespians, she didn’t get a nomination for the SAG Awards! Shame on us! 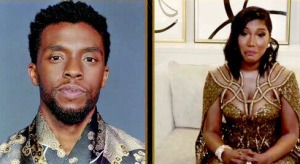 Chadwick Boseman’s image on the screen, while his grieving wife accepted his award.

And, of course, even though I’ve yet to see Ma Rainey’s Black Bottom, I’m happy for Chadwick Boseman‘s family and beautiful wife. As are many others, I’m still sick over the death of this beautiful man; what a loss to the world. So, of course, I support the lauding of him at all times.

Mr. X and I really expected to love Soul, but, even with the great music, and the afterlife being portrayed in my favorite colors, the whole thing was very unsatisfying. And Tracey Morgan opening the envelope and announcing “Sal” as the winner, made it all worse. 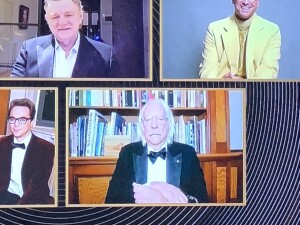 Donald Sutherland’s stoic face, in his Zoom box, compared to those of his fellow nominees. Photo by Karen Salkin, off the TV screen.

Donald Sutherland‘s face on his category’s Zoom section was priceless. He barely moved a muscle the entire time he was on camera. Not during the introductions of the nominees nor when the winner was announced and accepting. I’ve rarely seen anything like it.

In normal years, one of the fun aspects of awards shows is the pairing of the duo of presenters. Since that can’t be done right now, it was clever and cute to feature some real-life couples doing the honors, like Kyra Sedgwick and Kevin Bacon, and Catherine Zeta-Jones and Mike Douglas. 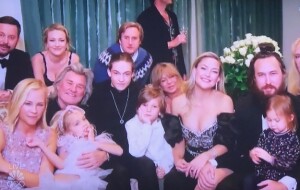 On the other hand, Kate Hudson‘s family and friends were all sitting waaay too close to each other at her party. What a bad message to send to the world!

I actually loved nothing this year, except for The Undoing in the TV category and and The Prom in the movie one, (where I thought James Cordon was perfect, by the way!)

I was glad there was not a lot of political stuff on the telecast; I’m a bit sick of it at this point. I needed a break. 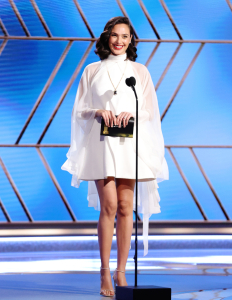 Gal Gadot was the most gorgeous one there, as usual. Her almost knee-length white flowy dress and sparkling stilettos were the perfect outfit; she was not trying to be outrageous or too glitzy or shouting the usual, “Look at me,” which seems to be de rigueur for awards shows in recent times. And then this morning, I found-out Gal is…preggers! The flowy dress was hiding it! I can always tell who’s with child, but I swear–this is the first time I had no idea! What a fun surprise.

I adore Kenan Thompson. Just seeing him brightens my day. 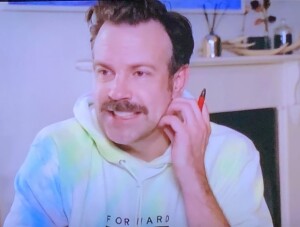 Jason Sudekis. Besides the dirty hair and way-too-casual-for-an-awards-show hoodie, the red pen indicates that he was working during the announcement of his category, which is just rude. Photo by Karen Salkin, off the TV screen.

I wanted Jason Sudeikis to win his category so I could hear him talk because I was hoping he’d be repentant for, or explain, his choice of attire for that evening. I could not fathom that he opted to look like that when he was up for an award. And then he won and didn’t even mention his rude appearance! Why couldn’t he have at least washed his hair?  And just put on even a tee-shirt and jacket??? It wasn’t a Zoom call with friends…it’s an awards show, for goodness sake! Now I see why Olivia Wilde left him for Harry Styles, despite Harry appearing in skirts and dresses recently. (Being with men who know how to dress is obviously not one of her priorities.)

The recipient of the Carol Burnett award, ninety-eight-year-old Norman Lear, is a marvel. Besides that he seems like a much younger man, his list of achievements is quite staggering. Even though we’ve never met, I feel a slight kinship to him because of two things. One is that I met his son just a few years ago when he was roommates with my friend in New York, and he seemed like a nice guy. The other is that when I was first doing my TV show, his CEO, the late Hal Gaba, was one of the first show business power people to contact me to sign me up! We had many meetings, and I moved up the Lear ladder, until I ran into a mean (and dare I say jealous?,) woman who put the kibosh on them doing a sitcom for me. But just hearing Mr. Lear mention Hal on the telecast the other night gave me warm feelings.

Lastly on the entire topic of Golden Globes: Yes, of course everyone wants to win an award, any award, but let me remind you that the Golden Globes are bestowed by an organization of only about ninety people, and ones of questionable character, to boot! So enjoy it if you win one, but please do not feel diminished by any stretch of the imagination if you do not. 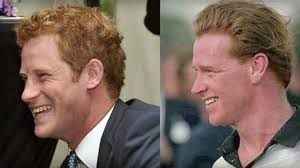 Now on to the horror of the upcoming Oprah interview with the ingrates, Harry and his wife. It could not come at a worse and more selfish time, with Harry’s ninety-nine-year-old grandfather in the hospital. Harry used to be so close with his beloved Granny, so this timing is extra shameful. If CBS goes ahead with the airing at this time, I’m boycotting them forever. And all of Oprah’s making believe she’s such a kind person will finally be proven to be absolutely false!

As I suggested over a year ago, (right here: itsnotaboutme.tv/news/gossipkarens-rants-i-could-not-dislike-that-markle-woman-more,) the Palace should just put an end to it all by doing a paternity test on Harry and his biological father, James Hewitt!!! Mercenary Megan will leave him so fast after he’s revealed to not really be a Royal, after all.