As a proud and serious Screen Actors Guild member who has always taken voting for these awards seriously, once again I’ve seen every nominated performance before voting. I even got up very early on Friday morning to watch one last film to be very fair. (And I wound-up voting for that performance, to boot!)  And I’m proud (mostly to myself) to say that I watched all but four on the big screen, the way movies are made to be seen. It’s been an interesting screening season. (And a stressful one because of my constant time-constraints, especially with my three-week trip to New York.) 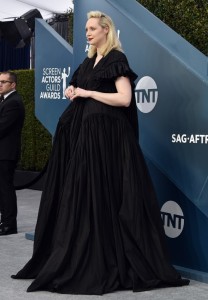 This is the absolute worst outfit of the night, on Gwendolyn Christie!!! Why would she try to make herself look worse??? It looks like she’s hiding the kids from under the cape of the Spirit of Christmas Present in A Christmas Carol.

So I watched the SAG Awards with a tad more gusto than I do other awards shows because of being an infinitesimal part of it, (as opposed to those other awards, of which I’m zero part, except to see the films.)

Oddly, there were no arrivals shows for this one. I guess we SAG members just get no respect. (I should have realized that’s the case, anyway, as soon as I saw that the show was scheduled against the last football play-off before the Super Bowl!) So there’s nothing to say about that aspect of this awards show. (Thank goodness.)

I live-tweeted a lot of the show last night, (which you can still read @MajorCelebrity,) but I saved a bunch of observations for this column.

And foremost in my mind is…what a snoozefest this show was! There were some fun moments, (like the speeches of Brad Pitt and Joaquin Phoenix,) but those were few and far-between. It really needed a funny host. But without one, at least the show moved along, and I’m pretty sure, ended on time. So there’s that. 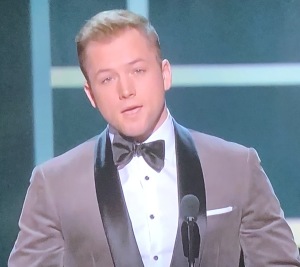 And how did the producers not take advantage of having Jennifer Lopez, the hottest person in show business, as a nominee, and have her be a presenter??? That’s just insane!

Now let’s get to the rest of my thoughts on this always-host-less show, in order that they occurred to me as I watched it live:

That was somehow a pretty classless speech from the cast of The Marvelous Mrs. Maisel, especially Alex Borstein.

Rocketman’s Taron Egerton is so much cuter than he was as Elton John in the film! 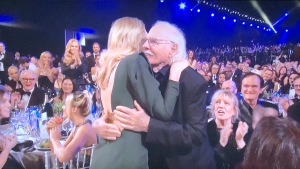 The Derns–Laura and Bruce. Photo by Karen Salkin.

I love that Laura Dern ran right over to hug her father when she won! (But she looked dreadful when they cut from the colorful Scarlett Johansson to her as she was giving her speech. She was one of the many women who needed lipstick! But her acceptance speech was nice.  And she had really good nails, which you know I always appreciate.)

What was Jennifer Garner doing there as a presenter? Has she even worked in show biz in years? (Outside of doing commercials, of course.) And I hate that she didn’t pause for even one second in announcing the winner! She’s one person they should have ditched in favor of having JLo present!!! 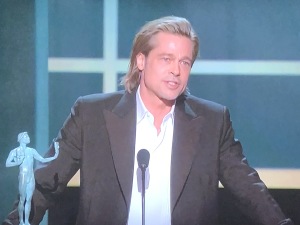 Okay, I now officially love Brad Pitt! I never, ever cared about him even one little bit, (except for being sad for him when he was desperate for children and selfish Jennifer Aniston wouldn’t have any, and being thrilled for him that he finally got a family with the kind Angelina Jolie,) but my love and admiration started at the end of his Golden Globes acceptance speech, and grew leaps and bounds with his SAGs one! Who knew that he was a riot??? (But then it diminished a bit with his backstage “reunion” with his ex, Jennifer Aniston. Read on for my thoughts on that bit, which the rest of the world is going gaga over.) [Note: That’s yet another pic of the two gorgeous men–Brad Pitt on the right and Leonardo DiCaprio on the left–at the top of this page. Photo by Karen Salkin.]

I really disliked those stupid little pre-taped supposed comedy bits, each featuring one TV actor, that ran when the show was coming back from commercials. All the bits (and actors, actually,) came off as smug and pretentious. 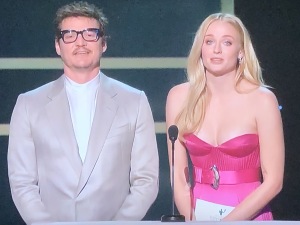 I never saw her before, (or just didn’t notice her,) but Sophie Turner, (Mrs. Joe Jonas,) is very pretty.

I have never ever heard the name Pedro Pascal before, and I never saw him before, either. Why would the producers have such an obscure person be a presenter, especially when there were so many stars in that room?! (They should have at least told us his credit.) 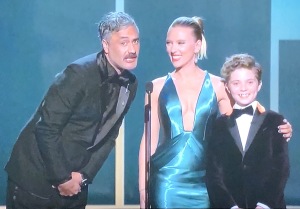 I love that Michelle Williams’ pregnancy is showing a little now. I’m glad that her life finally looks happy.

What are Gwendolyn Christie’s hips doing??? Is that dress form-fitting?

I love everyone from Jojo Rabbit, but especially young Roman Griffin Davis. I could listen to him speak all day! 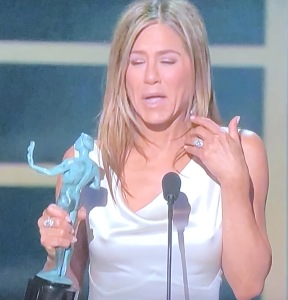 Gee, I wonder where Jennifer Aniston’s nipples are. Photo by Karen Salkin.

I’m sorry, but I just am not into Jennifer Aniston. At all. I actually find her to be phony and creepy. As I tweeted last night, I’m pretty confident that she wore that nipple-featuring, body-clinging, half-naked slip dress just to try to attract Brad Pitt. I was hoping it wouldn’t work, but from their much-photographed little backstage encounter, which most of the world seems to be loving, perhaps it did. Since she freely admitted years ago that their first date was room service and sex, I have a feeling last night might have been a repeat performance. I have no problem with Brad getting a little something something, but here’s my problem with their relationship in general: When they were married, I saw him on a couple of interviews saying that he was desperate to have children, and that he wanted at least five. Meanwhile, I believe that Jennifer was not into having kids, and therefore I always felt bad for Brad. So when he got together with earth-mother Angelina Jolie, who I consider to be one of the kindest people on earth, that seemed like a perfect relationship. Brad and Angelina’s beautiful looks match, their love of children and being parents matched, and I just loved seeing them together. I totally understand that Angelina had to kick him out because he was an alcoholic at that point. And now it appears that he’s begun to get his life together. So I would rather see him be with someone who’s also kind and caring, who also has a great love of children, than to see him go back to cigarette-smoking Jennifer Aniston. The end. 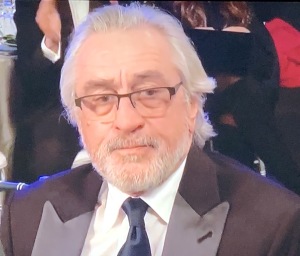 Robert DeNiro is the man! I loved his speech! It was spot-on, in every way. And, I must add, even though I am never a fan of white hair, on anyone, that was perhaps the best he’s ever looked!

Lili Reinhart may be the only one who looks okay with her cleavage exposed like that. And I appreciate that it’s a creamy cleavage, as opposed to the usual wrinkly ones that the older actresses (like Patricia Arquette and Susan Sarandon) just love to foist on us, for some unknown reason. 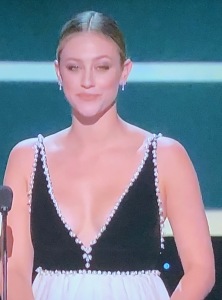 I liked Peter Dinklage’s speech. It was amusing, grateful, and very appropriate.

I thought someone walking-out on stage was Bea Arthur! (Even though she’s been deceased for quite awhile.) But it was Glenn Close.

I adored Joaquin Phoenix’s speech. It was very generous. And he really got me when he mentioned Heath Ledger.

Could someone get these women some lipstick, please??? No one loves a pale lip more than I do, but there’s a time and place for it.  And an awards show, on which you might possibly win and have to give an acceptance speech, is definitely not it! 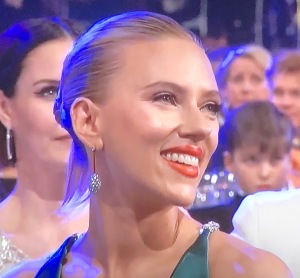 By the way–this is what I emnat when I said Laura Dern looked bad after they showed Scarlett. Our eyes went from this beauty to… 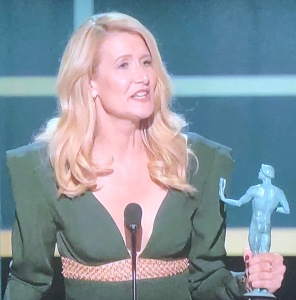 …this drabness of Laura Dern!!! See what I mean? It was kind-of visually shocking. Both photos are by Karen Salkin.

Renee Zellweger did her thick Southern accent again. I’ve heard her in person, and it’s never been like this. And she really needed lipstick and earrings, as so many others did, too. But most importantly, as I tweeted last night, she deserved the win for portraying Judy Garland…just for demonstrating that she can open her eye slits when she wants to! 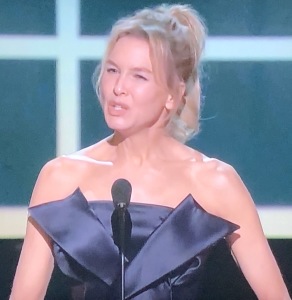 And that’s all I have to say about the SAG Awards! Because it was basically pretty boring, this was the easiest time I’ve ever had reviewing an awards show, so I sort-of thank it for that.

Now on to the Grammys next week-end! (And then the Superbowl, followed by the Oscars. I guess I can’t make any outside plans for Sundays for awhile! But you can, because you have me to recap it all for you!)