This 2019 Oscars was so good that I barely remembered to take notes! Mr. X and I just enjoyed the ride. 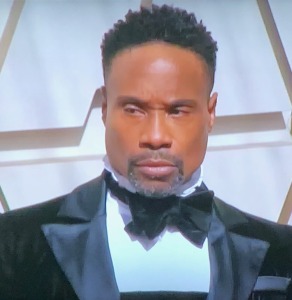 This is what Billy Porter looked like on the top… 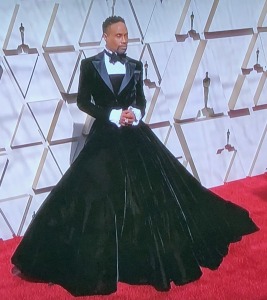 …but here’s the full view! Oysh. Both Photos by Karen Salkin.

And even though I watched all eleven hours of coverage, including some of several arrivals shows (I couldn’t watch all of those because they were all on at the same time,) and after-party shows, I tweeted so many of my thoughts on those, and I’m not going to repeat them here. (I’m assuming that most of you follow me on Twitter, so I don’t want to bore those of you who do.) But you can still read them on Twitter anytime, @MajorCelebrity. (And you should—this group of tweets is juic-y!!!)

The bottom line is—this was the best Oscars in a very long time! 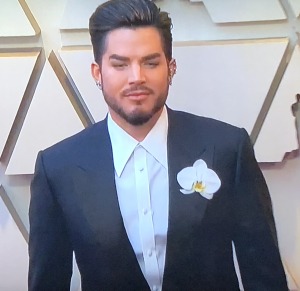 And it was a very happy Oscars, to boot.

I’m shocked myself, but it really benefited from not having a host. Kevin Hart would have been much too abrasive.

And no opening monologue was needed–Adam Lambert and Queen opened the show so electrifyingly; they set a fabulous tone for the rest of the night. It was a perfect duo of songs for the occasion—We Will Rock You, (which they absolutely did,) followed by We Are The Champions, which the winners now are.

I correctly predicted probably ninety-five percent of the winners, so good for me!

But there were several weird presenters. So let’s start getting into all that. 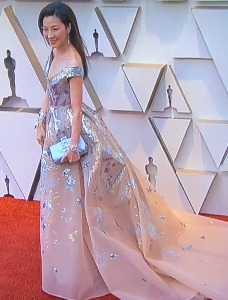 I love Michelle Yeoh’s gown, especially because it hides her ultra-skinny legs. But I have one word for her—sleeves!!! Why do so many women in the public eye insist on showing their anorexic arms??? I don’t get that for a minute.

Eventual Costume Designer winner for Black Panther, Ruth Carter, said, “When I see all the other celebrities coming up, I get excited, too.”  She thinks she’s a celebrity??? (And this was before she won!)

I see that Melissa McCarthy lost a bit of weight, so good for her. But that horrible outfit was not helping.

Billy Porter looked like a moron. In case you missed it, he wore a normal tuxedo top with a gown on the bottom! As he might say–please, girl! 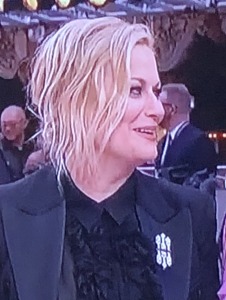 Amy Poehler had the most disgusting, filthy, raggy hair I have ever seen at an awards show! Did her stylist not show up that day? Does she not own a mirror? What is wrong with her? She looked like she just gave up on life. I would not even go to the gym looking like that! (Nor come out of it.)

Did that plus-size woman interview, Ashley Graham, actually finally lose weight??? Or did she just have great shapewear? No matter—she finally did look good.

That was not nice of ninety-four-year-old Cicely Tyson’s people to let her wear that crazy-old-woman outfit.

Crazy Rich Asians should win for cinematography to have made Henry Golding look so gorgeous on film when he did not look the same, at all, at the Oscars. 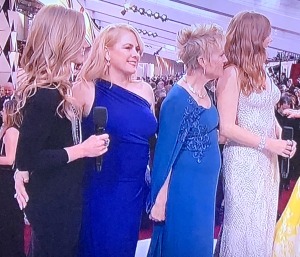 Amay Adams on the very right. But look at her one sister’s hand on her other sister’s butt on the very left. And she moved it around every now and then! What was up with that?! Photo by Karen Salkin.

I love that Amy Adams brought her female family members. But what was up with one sister grabbing the other one’s butt??? Eww.

Jason Momoa and Lisa Bonet were not only holding hands in the weirdest way, but how do they have sex, with their height and body-weight differences???

JLo—now that’s an Oscars outfit!!! (Here’s a personal side note: When Mr. X and I had thought of getting married back in the day—because all my friends were having not great weddings, and we wanted to show them how it’s done—the gown I designed for myself looked just like JLo’s Oscars one! The few people I told about it made fun of that I would wear a silver sparkling gown for my wedding, but that rebellious design was one of the reasons that having a wedding appealed to me for a minute to begin with.) [That’s Jennifer Lopez walking in with Alex Rodriguez, at the top of the page. Photo by Karen Salkin. Is there a more gorgeous couple anywhere?!  I think not.] 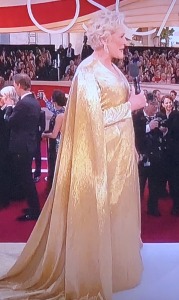 This is the worst outfit Glenn Close has ever worn! Photo by Karen Salkin.

Glenn Close has looked so elegant throughout this season, so why in the world would she come up with that forty-two-pound monstrosity for this most important awards show of all?! But the outfit she changed into for the parties was gorgeous, so why did she not lead with that one??? I cannot imagine what she could have been thinking. She needs to fire her stylist pronto, if she even has one!

Ryan Seacrest was euphoric to interview Rami Malek—Rami’s the only person there who’s shorter than Ryan is. (Bradley Cooper’s mother is, as well. I don’t remember her ever being that short—she looked like she was about 4’9”!!!)

The absolute two worst-dressed men were Spike Lee and Billy Porter.  And Emma Stone and especially Rachel Weisz, were, by far, the worst women!  Ugh, to all four of them! 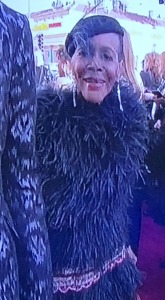 This was the best opening ever!

I’m so happy for Adam Lambert to be the one to say, “Welcome to the Oscars!”

My favorite thing all night was Javier Bardem’s reaction to Adam Lambert singing We Will Rock You! I re-watched that tiny moment again and again.

Side-note: The first time I saw Adam Lambert was on this very stage! I was in the first row on the opening night of The Ten Commandments: The Musical almost fifteen years ago, and the only time I didn’t hate the show was when Adam sang his one number. I was stunned by his voice! I actually went back to see that whole dreadful show just to hear him sing once again. So, I’m sure his triumphant return to this stage all these years later meant a big deal to him. And I’m right there with him. 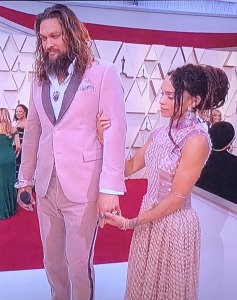 That was lovely of Chris Evans to walk Regina King up the stairs to accept her award. And I especially loved that he did it in the least obvious way.

Helen Mirren and Jason Momoa were an odd presenting duo, but they made it work.

Even though she appeared full-of-herself walking in, (as I noted above,) Costume Design winner Ruth Carter’s speech was good.

I did not like the goony Set Design winner from Black Panther, Hannah Beachler, who completely ignored her co-winner for set decoration. 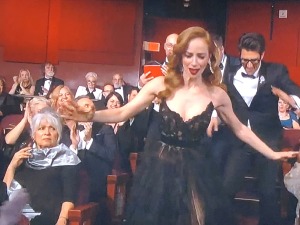 Winners Jaime Ray Newman and Guy Nattiv, although the seated woman with the white hair doesn’t seem too happy for them! Photo by Karen Salkin.

Why the frig is Serena Williams presenting at the Oscars???

No one enjoyed himself more than Richard E. Grant!  I’m so happy for him.

Why is a chef presenting?

Two of the happiest winners were Jaime Ray Newman and Guy Nattiv, who won for the Best Live Action Short Film, Skin. 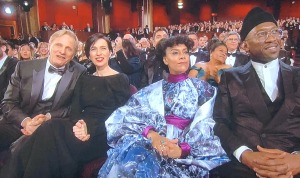 Mahershala Ali and his ill-dressed wife on the right, with Viggo Mortensen and his date on the left. Photo by Karen Salkin.

What in the world was Mahershala Ali’s wife wearing??? It looks like the blanket they put over you after you’ve run a marathon!!! I feel bad saying this, but she seems to always be the worst-dressed person at an event. (Maybe she was just trying to distract us from noticing that her husband, a potential Oscar winner that night, who did win, was wearing an outdoor skull cap…to the Oscars!!!)

I love this William Goldman quote that Samuel L. Jackson shared last night: “The easiest thing to do is not write.” Boy, do I know that! Especially as I’m trying to finish this long review right now! 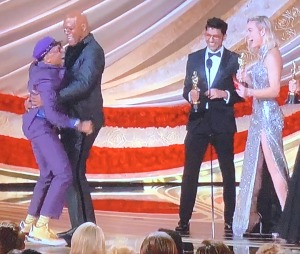 And he and Brie Larson were the two happiest, most-giggly presenters I think I’ve ever seen! I’m so glad they got to present two awards, so we could witness their mirth for a little while longer.

Even though I found BlacKkKlansman to be among the more boring films this year, I am thrilled for my fellow Brooklynite, Spike Lee, to finally win an Oscar after all these years in the biz.

I love that writing winner Peter Farrelly thanked “the entire state of Rhode Island.” I used to live there and am still as attached to the place as he is.

Frances McDormand. Just take a gander at those classless shoes! (At least she knew enough to polish her toes. That’s actually a shock!) Photo by Karen Salkin.

Does Frances McDormand always dress like a frump just to annoy us? Or does she just not know any better? Either way, I almost threw-up when I saw the hideous yellow rubber house shoes that she thought were okay to wear to the Oscars!

I do feel bad for Glenn Close to have lost-out on an Oscar for the seventh time, but Best Actress Olivia Colman gave perhaps the best speech ever! I was laughing and crying at the same time.  I didn’t want it to end! Mr. X and I actually re-watched it right away, which he never does!

Why did they not have performances of all five songs? Did I miss the one from Black Panther? I’m asking seriously, so if you know the answer, please share it in the Comments section below.

And why was there no big Lifetime Achievement Award? That’s always one of my favorite parts of the show! (They showed a few seconds of tape of some people, including Cicely Tyson, being honored at an event the week before, but it’s far from the same as having a major to-do in your honor on stage the night of!) Shame on the producers for that!

So, I’ve been upset for awhile that these new Oscars telecast producers thought that the four Acting winners from last year—Gary Oldman, Frances McDormand, Sam Rockwell, and Allison Janney—were not big enough names to present their rightful awards this time. (The protocol has always been for the previous winner to present to their opposite sex counterpart the next year, unless in rare cases, like Casey Affleck bowing-out last year because of sexual harassment allegations against him.) So I’m glad that the meanie producers finally relented, though almost at the last minute, and had all four of them present, but not in the usual configuration. They didn’t present all the awards the former winners always have before, and they did so in pairs, but at least they did get their moments in the sun. Well, half a moment each.

Other than that, I really enjoyed the 2019 Oscars. Let’s keep the amity going for all the ones to come!