Trending
You are at:Home»ART»ART/EVENT/CHARITY: ART FOR ALS
By Karen Salkin on June 17, 2016 · ART, EVENTS 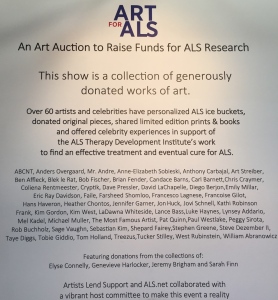 I recently attended Art For ALS, which was a really lovely event for a really sad cause.

The cause is an important one, so I’m telling you about that part first. I feel that, because Yankee great Lou Gehrig died from it, many of you are aware of ALS. But not everyone knows just exactly how the dreadful disease manifests itself. So, these events to raise money to help find a cure are helpful in that area, as well. Perhaps if the public knew a bit more about the situation, a cure could be found more quickly. Sometimes even a little understanding goes a long way. So, it’s events like this one that do a lot to raise awareness. 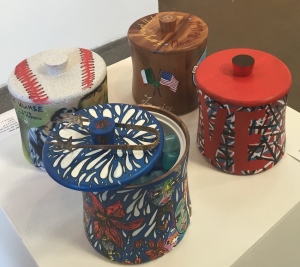 A few of the celeb-and-artist-designed ice buckets for auction. Photo by Karen Salkin.

I don’t want to bring the room down to explain what I know of it, but I feel that everyone should understand even a bit about ALS. The people afflicted are totally mentally aware, but can no longer speak, or in many cases, move. I can barely even imagine what that must be like. Because of my own slight health issues, when I’m exhausted, I can’t form words, even though I know exactly what I’m trying to say, so I understand just the tiniest iota of their plight. But people with ALS have to spend the rest of their lives living like that, and not just when they’re tired. That’s horrific. We should all feel for everyone involved. 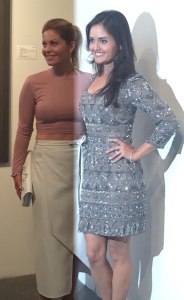 So I especially laud the group Artists Lend Support who assisted with this wonderful art auction, Art For ALS, to raise funds and awareness. They succeeded brilliantly, on both counts.

The fete was in Arena 1 Gallery, which is in a hangar at the Santa Monica Airport. There were several celebrities on hand, most notably Courtney B. Vance, (yes, the guy who just played Johnnie Cochran so believably that I kept thinking he was Johnnie!,) the lovely Danica McKellar, Minnie Driver, and Candace Cameron. [Note: Though that was just the real lighting in the photo to the left, can you tell which girl I’m a fan of, and which one I’m not?]

The eclectic artwork was all on sale to raise funds to help find a cure for ALS. The pieces were all so interesting. There was work in many different mediums; oils, sculptures, drawings. There was even a tapestry of Bernie Sanders! 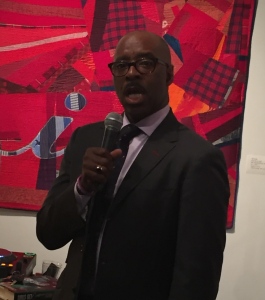 Courtney B. Vance addressing the crowd. Photo by Karen Salkin.

The event was hosted by two kind people whose lives have been affected by the disease–Suzi Hoffman-Kipp, who lost her husband to it, and Paul Greene, who lost his father. They did an admirable job of showing the guests a fun time while also giving us information on ALS. It gave me hope when Paul said that he expects to see a cure in his lifetime. Amen to that, brother! [Note: The big picture at the top is of (L-R,) Courtney B. Vance, Paul Greene, and Suzi Hoffman-Kipp.  Photo by Karen Salkin.]

Courtney B. Vance also spoke, and he eloquently told us the tale of his once-vibrant mother, who is now in the throes of ALS. His words really painted a picture for the assemblage. They broke my heart. Somehow, when you see celebrities, especially someone such as Courtney, who just gave the performance of a lifetime, and is married to a beautiful, talented actress, (Angela Bassett,) you just can’t picture them having such heartache in their families. 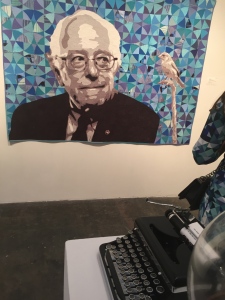 This pic features three things I got a kick out of: a tapestry of none other than Bernie Sanders, a typewriter from 1929(!), and a guest whose dress that matches the tapestry! What fun! Photo by Karen Salkin.

Of course, the reception featured food and drink, and a DJ who played excellent music at the perfect non-intrusive volume for the fete, but I think that the majority of attendees were there for a higher purpose. And that was to support the cause, and buy the artwork, which was donated by many talented artists and even some celebs. Several of them even designed ice buckets, to go along with the famous ALS “Ice bucket Challenge.” I noticed one by Jennifer Garner, and another by Shepard Fairey, who became famous for his iconic muted-colors Obama “Hope” poster. What fun it will be for the winning bidders to have those in their homes!

The organization raised a lot of money for ALS that night, but, of course, more is always needed. To donate, or just find out more about the cause, in general, please got to www.als.net.