Trending
You are at:Home»ART»ART: I’D LIKE TO HAVE A WRD WITH YOU
By Karen Salkin on November 9, 2017 · ART

Sometimes, when I’m going to an event, I have no idea what it is I’m getting into. So, you’re wondering why I accept those invitations to begin with? It’s either because the invite itself made the event look alluring, or I like the PR person or the host, or most likely, because I think one of my pals would enjoy it. 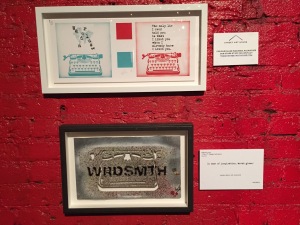 And that’s what happened in the case of artist Wrdsmith’s exhibition, I’d Like To Have a Wrd With You. I didn’t understand the invitation, and I could not figure out what it was exactly, but I liked the people involved and it was sort-of on the way to where I was going later that night. And when I asked around to see if any of my friends would be interested in going to it with me, my friend Diane jumped out of her skin with excitement!

So, that sealed the deal for me. And off we went to the opening night reception for Wrdsmth’s first solo show. [Note: I think his title is really written “wrdsmth,” in either all caps or all small letters, but not both, and spelled the way I have it. But I’m occasionally adding a capital “W” at the beginning here, to make it easier for you guys to see that I’m writing about the artist, and it’s not just a jumbled-up word in there.] 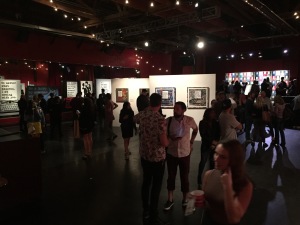 Before we went to the fete last week-end, I had planned on just adding a few words about it to this past Monday’s column, which was about another art event hosted by Street Art House. My exact note to myself was: “Maybe add wrdsmith to Monday’s, if it’s not good enough on its own.” (Nice, I know.) So, boy was I in for a shock!!! The line waiting to get in was around the block! And that was even right before it began! The hipsters were chomping at the bit to see this artwork and meet the artist!

The opening reception took place at the very interesting club/party venue Fais Do-Do in West Adams. This place has been around longer than I have, yet this was only my second time there. I hope for many more visits. 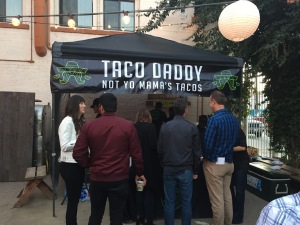 And this time, I discovered something new to me—an outdoor space! For this art show, it was set-up with picnic tables for us to enjoy our Taco Daddy goodies on. That area was hopping! We all had a choice of any two open-faced soft tacos, and since I had discovered them elsewhere recently, I couldn’t wait for my delicious pork ones. Vegetarian Diane went with the El Gringos which were, of course, all veggies. There were two open bars for the VIPs, as well, which ensured a good time was had by all. 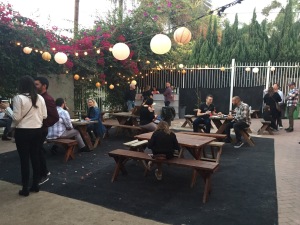 But back to wrdsmth’s art. As some of you may know, I’m far from an art expert, (except to be able to name all the original colors in Crayola’s big box of sixty-four crayons!,) but I really enjoyed Wrdsmth’s work. Perhaps not as much as the masses lining-up to purchase his colorful prints, but close. It appears that his signature design is that of an old-fashioned typewriter, which I love for two reasons: 1) Because I’m a writer! (Duh.) And 2) Because I actually own a gorgeous very old-fashioned one that belonged to my parents! (So you think that I’d be able to type with both full hands rather than the only-two-fingers I use to create this entire e-zine!!!)

I turned to worldly Diane to help me figure-out exactly why everyone was going extra ga-ga over the display. I don’t remember her answers word-for-word, but she mentioned something about this exhibit making art accessible to the public, and also the “power of art over rhetoric.” (For those of you as nescient about these things as I am, Wikipedia describes “rhetoric” thusly: “Rhetoric is the art of discourse, wherein a writer or speaker strives to inform, persuade, or motivate particular audiences in specific situations.” I can see where it can be applied in this situation because wrdsmth’s art all comes with words on the pictures.) 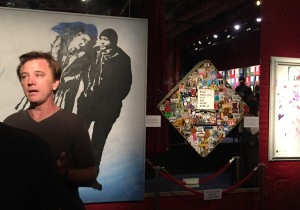 Wrdsmth himself, talking to an admirer, with the sticker work I love! Photo by Karen Salkin.

When I was lucky enough to spend a few minutes with Wrdsmth himself, I found-out that his work began as street art. But for me, it’s so much more than that. As a writer, (and talker!,) I really love that words accompany each piece. Actually, they don’t really accompany them—the sentences are equal portions to the drawings (or other mediums) themselves! My favorite is a work of all stickers; I would do one like that myself, if only I could part with my stickers on their sheets!

I’m also a fan of the many romantic sayings on display. They’re sentences I feel that Mr. X would say to me, if he said that kind of thing. Here’s my fave: “The only lie I ever told you is that I liked you when I already knew I loved you.” Mr. X would never cop to that, but we all know he feels that way. (I think.) So Wrdsmth must be a romantic guy, which is always good in an artist. (And he’s cute, too!) 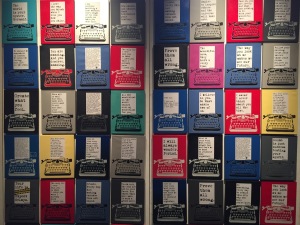 The wall of prints. Photo by Karen Salkin.

The wall of prints (which was perfectly displayed on the stage of the big, open room,) was especially compelling, both visually and in what was to become of it. The individual pieces were all available for purchase, but not until the appointed time. And, once a buyer had agreed to the purchase, he or she would then find-out if theirs was one of the ennead that was totally free!!! From what I understand, the artist does that to “pay it forward,” a concept I’ve been embracing ever since I was a naïve teen-ager, arriving in Los Angeles on my own, and relying on the true kindness of strangers. (Though, let’s face it, they weren’t all being kind; what male wouldn’t want to help-out a hot young thing?!) 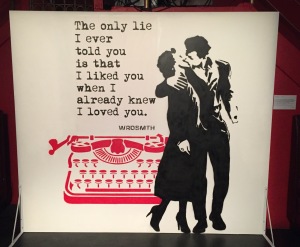 I left there feeling so in the know in the world of art. And to cement that new status for me, I was thrilled on every level when, just four nights later, I saw Wrdsmth’s art on a wall of a Beverly Hills restaurant during its re-opening soiree! I happily pointed it out to just about the entire assemblage, not just to show-off my newfound art knowledge, but because I really admire the work. So, I too, paid it forward! We wordsmiths have got to stick together!

And now you, too, will have the chance to see of what I speak because the show is open to the public this week-end, too. For details, just go to the website of the company that is producing the show: www.streetarthouse.com.

And maybe I’ll even see you there. Hope so!