THE WOLF OF WALL STREET

This is the second best film of the year, (right behind The Book Thief,) and it got really screwed in the nominations department because of its very late release. There were only a handful of last-minute screenings for the SAG Nominating Committee’s deadline, and no screeners were sent at all. I’m pretty sure the group who nominate the Golden Globes didn’t have any better access to the finished product. (Here’s hoping that the Academy has better luck with it. And sense to bestow some deserved noms on it, too!) 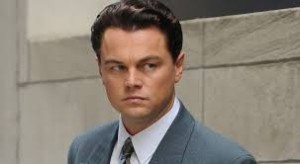 It’s such a shame because The Wolf of Wall Street is a movie that, despite its portrayal of over-the-top real-life debauchery, is actually fun to watch. It’s filled with humor, and the cast is excellent, none moreso than Leonardo DiCaprio, in his second best performance ever. (See the next paragraph to find-out what his best is.)

His portrayal of a mentally-challenged teen-ager in What’s Eating Gilbert Grape has rarely been matched, not only by Leo himself, but by most other actors. I actually thought they had hired a real slow boy, just like they had a real obese non-actress to play the mother. After seeing that performance, (and only on TV, no less!,) he’s gone downhill in my eyes ever since. (Any actor would have! It’s not a fun film, but you have to see Leo in it!) [Note: As I was writing those last few sentences, I thought that I should do a list of some of the best performances I’ve ever seen. That sounded kind-of familiar, so then I went into my archives, and voila! Here’s the link to the one I already wrote three years ago, and not much has changed, opinion-wise, for me: itsnotaboutme.tv/news/lists-best-performances-of-all-time.]

I need to let it be known that I am not a Leonardo fan in general; I never seem to care about him one way or the other. I don’t know much about him, and I don’t even think he’s really good-looking. He’s never even come close to making my list of celebrity crushes.

But the many levels of personality that he brought to The Wolf of Wall Street is something to behold. I don’t know many actors who could’ve played it the same way, without overdoing. (And who knew he could move like that? There was one tiny scene of him dancing that I could’ve watched for at least five more minutes.)

And Martin Scorsese’s direction is fabulous. What an undertaking! No wonder the film was ready so late in the season. There was so much to this real-life con man’s story that it would not have been fair to the viewing public to rush it. Including so many aspects of this man’s life did contribute to making the film almost three hours long, but I swear, it will really moves right along.

Now to the controversy over the subject matter. Yes, Jordan Belfort is an absolutely disgusting, despicable, poisonous snake. But that doesn’t mean there can’t be a film about him. Ever see a movie about Hitler? Or real life rapists and murderers? Unfortunately, evil makes for good filmmaking. But The Wolf of Wall Street does not make Belfort a hero; rather it just shows how rotten he is. If I remember correctly, they didn’t show anything good about him. I’m sure we’re all disgusted at how little prison time he received, but that’s not the filmmakers fault; the justice system is the one to blame for that debacle.

I actually didn’t even know this was based on a real person, and as I was watching at I was in disbelief. I thought the whole scenario was mostly unbelievable. (And I guess I was hoping that it wasn’t true, especially some hard-to-watch activities such as tossing little people into a target for sport. Belfort should be in prison in life for that alone!) It started dawning on me towards the end that this was perhaps a true story, and it was confirmed when the credits rolled. [Note: If you want to see the real Belfort, so you can spit on him should your paths ever cross, he has a small scene at the end, intro-ing the movie version of himself at a conference.]

But Scorsese was not glorifying this creep. He was just telling the story. He wasn’t even using it as a cautionary tale, though I’m hoping that it will stop anyone who sees it from ever doing investments with a stranger over the phone. That just seems like stupidity in any decade.

The story of over-the-top excesses was a perfect one for Scorsese to choose because telling those stories is his forte.

And seeing his always-spectacular results should be any knowledgable movie-goers forte! So, the next time you can spare three hours for entertainment, I really recommend heading over to The Wolf of Wall Street. This movie is a safe investment of your entertainment dollars.