As a long-time Lythgoe Family Panto fan, I was thrilled to get a true backstage look at their rehearsal process. And I did it for two of their upcoming shows! 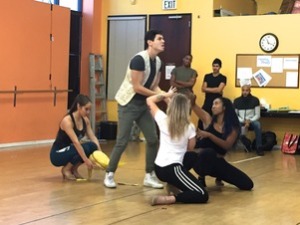 Jason Gotay, in the center, with the dancers of Aladdin. Photo by Karen Salkin, as is the big one of the Pasadena Civic at the top of this page.

In case you’re not familiar with the “panto” concept, let me enlighten you. It’s a British tradition and is a show that’s based on a well-known fairy tale, but the story is changed-up a bit, and has Christmas as a part of it.  (Hence, us seeing them this month!) There’s are a lot of “rules” of what it should include, chief among them being singing, (of current pop songs along with some classics,) dancing, slapstick comedy, silly double entendres, (for the grown-ups in the audience, because it’s also a show for children,) a male actor obviously playing a woman, and lots of audience participation, especially to loudly boo the villain.

The first press event went down at a wonderful little rehearsal studio in Burbank that I never even knew existed. (That shows you just how well my acting career has been going!) They were readying three productions at once for assorted pantos at various venues: Aladdin and His Winter Wish at the Laguna Beach Playhouse, Beauty and the Beast—A Christmas Rose at the Pasadena Civic Center, and even one in Houston! Astros fans are going to have a second bout of good luck this year by getting to see that show! 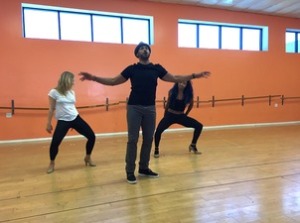 At this preview, we were treated to a sneak peek of Aladdin. I had seen the show before at the Pasadena Playhouse a few years ago, but this version features many new cast members. I loved seeing them all rehearse; they appeared to be having as much fun as they do in the actual show, in front of big audiences as opposed to just us few members of the press.

I got to speak with some of the principals afterwards, and now I’m madly in love with Jay Donnell, who plays the Genie, (and has to fill Ben Vereen’s large shoes. But my money’s on Jay.) I can’t wait to see him in the whole show! 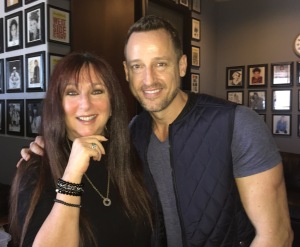 I also chatted with three creative peeps I already knew: charming, handsome Aussie Josh Adamson, (who plays an evil enchanter who wants to take over the kingdom, which is so far from the nice guy I’ve experienced him to be in real life,) funny Barry Pearl (as Princess Jasmine’s father–he told me he had gone on in this role for one night only when it was in SoCal the first time, so I’ll be happy to see what he can do with the full rehearsal process!,) and talented So You Think You Can Dance choreographer Spencer Liff, who’s not only filling that role here but is directing the panto, as well. (I’m still a fan of his work, even though he didn’t seem to think I was as amusing as the other three men did, but you can’t win ’em all.) 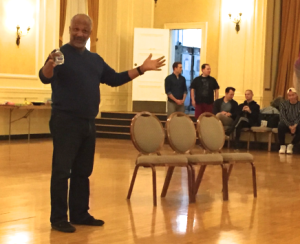 That was all last week, and then, just the other day, I paid a visit to the gorgeous historic Pasadena Civic to watch the cast of Beauty and the Beast this time. And I can tell you that this one is looking good, as well.

I’m so impressed that the Lythgoes always get such top-notch behind-the-scenes people. This time the technical star power is brighter than ever! There’s director Sheldon Epps (who is the former Artistic Director of the Pasadena Playhouse,) Musical Director Michael Orland, (the former Associate Music Director on American Idol,) and Mandy Moore, (the absolute, hands-down hottest choreographer in the world right now! She even won the Oscar for La La Land!!!) 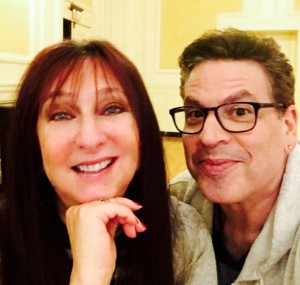 I loved chatting with my already-buds Michael and Sheldon in this relaxed atmosphere. And finally meeting my new bestie, Mandy, whose work I’ve admired for so many years now, was a real treat. She’s so down-to-earth about all her accomplishments! She shared that she’s always creating in her mind at all times, which I really appreciate because sometimes I think that I’m the only one who can’t ever turn-off my mind. And just like a proud mom, she could not choose a favorite medium among So You Think You Can Dance, Dancing With The Stars, movies, and choreographing this panto! (But she did explain some of the differences to me. To paraphrase, she said that on DWTS, she gets to do big numbers, even with special effects such as using drones, as opposed to SYTYCD, which is very intimate because it’s usually just a duet. She said La La Land was great, and choreographing this panto is tons of fun!) 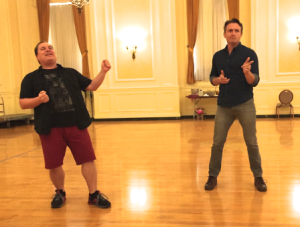 By the way, the cast isn’t too shabby themselves. The only actor I had ever spoken with before is adorable Jared Gertner, (who let me in on the fact that he’s actually not a teen-ager, although he still looks like one,) but I had seen several of them onstage over the years, so it was fun to get to know them a bit here. Gorgeous James Snyder was probably the best thing about the confusing musical If/When, (even if he did attend a college I detest!,) Gedde Watanabe is even cuter than he was as a dad in The Fantasticks in town last year, (and I love that he shares my appreciation for all the long-time ushers at the Pasadena Playhouse, who I’ve seen love him back,) and I absolutely adored talking the differences in puppetry with John Tartaglia, who made a splash on Broadway in Avenue Q! 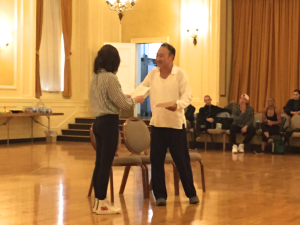 The surprise of the group for me was young Kelli Berglund (who plays Belle here,) who is a “Disney kid,” and appears to be so down to earth! I always think those young ’uns will be obnoxious, but not in this case. And she and Jared should have a competition to see who wins for most beautiful complexion!!!

Both troupes I met with are led by my co-New Best Friend, Becky Lythgoe, who keeps the rehearsals fun and loose while still being totally professional. Most of the Aladdin peeps are repeat panto-ites, and are very happy to be so. But most of the Beauty and the Beast cast are panto newbies, and they all expressed to me how thrilled they are with the experience. That just shows you how fun these shows are because it’s one of the most accomplished casts I’ve ever seen all together. Most are Broadway veterans, and none of them are full-of-themselves over that fact! It was all lovely to see.

But my favorite person at either event is Beauty and the Beast stage manager Vernon Willet. This is how we met: He walked up to me before the rehearsal began with something in his hand, and said, “Excuse me, you cut your shin and the blood is ruining your leg line.“ I looked down and saw that, from a little shaving cut that morning, my leg now looked like the hatchet murders! (I’m a bleeder.) And then Vernon handed me what was in his hand, which was an alcohol packet so I could clean-up the blood. Besides that that was so incredibly kind of him to begin with, what cracked several of us females up for the rest of the day was that he told me the blood was ruining my leg line! And guess what? He was absolutely correct about that assessment! 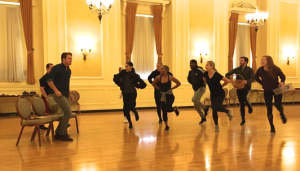 Rehearsal of the opening number from Beauty and the Beast. Photo by Karen Salkin.

I cannot wait to see these pantos, the first one opening tomorrow night in Laguna! I hope you all join me in seeing both shows, because we Southern Californians are really lucky to have opportunities like these. They’re the perfect holiday entertainment for grown-ups and children alike. (But over four, please.) I’m seeing Aladdin with my junior reviewers, Benjie who’s eight and Alexa who’s five, so it will be very special for me.

And just remember—you never know what talent you may discover—I got to see this season’s newly-crowned Dancing With the Stars champion, Jordan Fisher, in Aladdin three years ago! Here’s to discovering more gold this year!