What do Woody Allen and I have in common, you might ask? (Outside of the obvious fact that we’re both neurotic Jewish show biz folks from Brooklyn, of course.) We’re the only two Midwood High School alums to have ever guested on The Tonight Show! And with Johnny Carson, to boot! 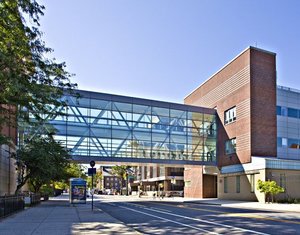 We may have Midwood to thank, in part, for having something to do with shaping our personalities enough to even have been invited on the show to being with! The school has always been dear to me. I know that many people disliked high school, so I feel a bit bad saying that I had a great time there. I was Sophomore Class President, Choreographer of Sing, (Brooklynites will know what that is,) Class President a time or two, and a Booster, (which is “Cheerleader Light.” But, with 1,331 in my graduating class, they needed an athletic outlet for more than eight-to-sixteen girls.)

So, when I recently found-out that Midwood is celebrating the 75th Anniversary of its existence this month, with a major soiree, I just had to get myself back to Brooklyn for it! (And, since my mind never left high school, it wasn’t much of a stretch.) 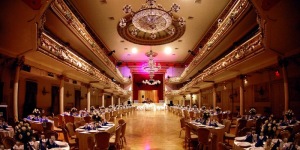 I had no plans of reviewing the festivities, but since some of my fellow Hornets are begging me to give it the “Karen treatment,” I do plan to tell you all about it when the two-part Jubilee is over. First up is a casual brunch…at the school! I guess it will be in the cafeteria, right? That should bring back a ton of memories for everyone. Then there’s a more dressy buffet dinner at Brooklyn’s Grand Prospect Hall, a place I’ve been curious about for years. Now, if only I could still eat all that fun fare! (Alas, I don’t know if I’ll make it to that portion of the program, but, with my ever-changing plans in NY, one never knows.)

For now, I’m proud to tell you that my father, Martin Salkin, was Woody Allen’s Speech teacher back in the day. (I’m guessing by Woody’s current dialect, my father’s teachings did not take.) He told me that Woody was a quiet, shy student. He had no idea that he would become a film icon! 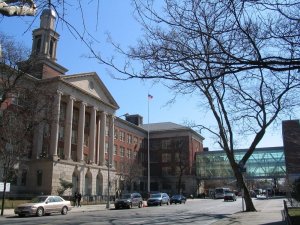 Midwood High School, in all its glory.

And my mother’s cousin, Arthur Mattuck, who is a big math professor at MIT, (yes—I am the black sheep of the fam,) is a major financial booster of Midwood. That may be due to the fact that it’s considered one of the best high schools in at least New York, if not the country! Go, Midwood! (I was doing a horse jump, which is a cheerleading specialty, while I wrote that.)

In the “successful alumni” category, I know some in my adopted home of LA. One is Sharon Bialy, who casts not only The Walking Dead, but she also did the casting honors for Breaking Bad. What kind of nightmares must that woman have?!

There’s also Judy Rothman who’s a producer and writer of many children’s television shows, including The New Adventures of Madeline . And who’s probably the only person to have her wedding reviewed by none other than…moi! (How could I not do that for a fellow hornet?! And besides, the nuptials fete was major fun!)

I have a fun story of how I met another one. I was at opening night of The Fantasticks at the Pasadena Playhouse here in LA., and spent a lot of time before the show speaking with the late theatre icon, Gordon Davidson. (If you missed it, you can read my tribute to Gordon here: itsnotaboutme.tv/news/tributerip-gordon-davidson-rip.) For many years, he and I always talked about our beloved Brooklyn, and this time, he proudly told me that his brother, Mike, would be speaking at this event. Gordon’s publicist wife, Judi, went to Midwood, too, but they had decided not to make the trip to New York. I told him that if I go, I’ll tell them all about it when I get back.

Then I bumped into Judi in, of all places, the packed ladies room of that theatre. She asked if I was going home for the Jubilee, and while I was explaining to her that I didn’t yet know my plans (because I had just found-out about it that day, from adorable fellow alum Helen Rothwax,) all of a sudden, a woman came out of a stall, and said she was going! I loved that! Even though Judi and I were not speaking loudly, that restroom is so tiny, everyone can hear everything!

It turns-out that she’s Lisa Napoli, a very working journalist, whose last book was a memoir set in and around the kingdom of Bhutan! (How are she and I both journos?! Something must be wrong here. I guess I’m the blonde version.) I’m glad to say that we’ve been in touch ever since.

I understand that Matilda Raffa Cuomo, who is the wife of former New York Gov. Mario Cuomo, and the mother of current Gov. Andrew Cuomo, (and graduated from Midwood in 1951,) will be the honoree of the event. I’m looking forward to seeing her since I’m a fan of that family.

For my part, I’m in New York now, but still been going back and forth a bit on attending, (since it includes alumni from all seventy-five years, there will be only a few people we each know,) but, with it approaching in just a couple of days, I’m leaning towards yes. (I’m sure you’re all on pins and needles waiting to find-out what I decided.)

Even if this is the first you’re hearing about Midwood’s Jubilee celebrations, it’s not too late to attend! Here’s the link to all the info, and the registration form, as all: www.midwoodalumni.org

Hope to see all of you Midwood Hornets there! I’m sure we all have lots to catch-up on, at this point. I’d especially love to compare Tonight Show notes with Woody. How special would that be?!