Trending
You are at:Home»LIVE PRODUCTIONS»UPCOMING EVENT: 2010 ALL THAT SKATE LA
By Karen Salkin on September 9, 2010 · LIVE PRODUCTIONS, SPORTS THOUGHTS, UPCOMING

ALL THAT SKATE LA

Okay, so I lied about giving you guys the US Open updates. But I didn’t mean to. I’m just so busy watching every second of the tournament that I haven’t had time to write about it! So, I’ll put all the highlights in the wrap-up column at the beginning of next week.

But I have a fabulous sporting event to give you a preview of today, All That Skate LA. Those of you in Southern California should be especially interested because tickets just went on sale and believe me, you don’t want to miss this one!

The other day, I wrote about a female athlete I don’t respect on any level. (Serena Williams, in case you missed it.) So, now it’s more than my pleasure to tell about two I couldn’t revere more. They’re ice skating champions Michelle Kwan and Yuna Kim, and they’ve teamed-up to bring us this live event that I, the ice show maven, am jumping out of my skin over.

I attended their press conference at Pickwick Ice Rink in Burbank the other morning. (Yes, you read that right–I did leave watching the US Open for it, but don’t worry–I recorded it all and watched in the middle of the night.)

Let me tell you–I’ve never seen so much gorgeous hair in one room! (I’m counting myself in this, too, but only because Mr. X flat-ironed it that morning. Michelle’s and Yuna’s manes are naturally fabulous.) Seriously, they both look great, and I’m especially impressed with Michelle, who at the age of thirty, looks the same as the just-turned-twenty-years-old Yuna! It’s mind-boggling that she’s kept in such great shape when she’s been focusing on getting a Masters degree from Tufts University’s Fletcher School in Boston. I love that these two lovely ladies are now working together. What a treat for skating fans!

All That Skate started with a successful run in Yuna’s home country of South Korea. Now, I consider us privileged to get to see the show live here at Staples Center on October 2nd and 3rd. It will feature three of the four current Olympic Champions, (Ladies, Pairs, and Dance,) and the other one I don’t like, so it doesn’t matter. 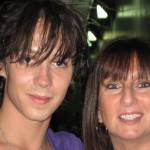 Karen with Johnny Weir, both rocking those bangs!

I’ve been lucky enough to see live performances by most of these athletes over the years, and I can attest to their greatness. Yuna Kim, the Ladies Olympic Champion, is considered by many to be the most magnificent female skater of all time, and to get the chance to see her move in person is a spectacular experience. The married couple Pairs Champions, Xue Shen and Hongbo Zhao, are absolutely incredible, and usually reduce me to tears, as does the always fabulous nine-time World Champion Michelle Kwan, who’s happy to be returning to her hometown of Los Angeles with this show.

Brian Joubert, backstage after a long week at the 2009 World Championships. Photo by Karen Salkin.

Of course, my favorites are the guys. What else is new? Finally, we get to see three-time US Champion Johnny Weir on the ice again. He’s an amazing artist, and also, when I met him a few years ago, he laughed at everything I said, so of course I love him! And former world Champion Brian Joubert is as gorgeous as his skating is amazing.

I could tell you about all the acts, but I’ll do that in the review. In the meantime, please look-up the whole cast on All That Skate’s website: www.allthatskate.com.

I believe that Michelle got her professional start with Champions On Ice, which we skating fans were devastated to see close shop a couple of years ago, so I’m especially anxious to see All That Skate because it sounds like a similar concept. I asked Michelle how her new show compares to the old one, and she told me that it’s kind-of like Champions, but with “a modern twist.” She said there will also be singing, (I know that Yuna is also a famous singer in Korea, so hopefully we’ll get to hear her, in addition to others,) and that the lighting “is a star and performance in itself.”

I can’t wait! I’m so grateful to have a new skating show option, especially one with all performers who are familiar to the audience from this year’s Olympics. But if you sit next to me, don’t be surprised to see me crying all the way through it because great beauty does that to me. So, bring your hankies. For both of us.