I’m so sad that the world lost such a beautiful and worthwhile man recently. I’ve met tons of people in sports, but Tom Collins was one in a million. 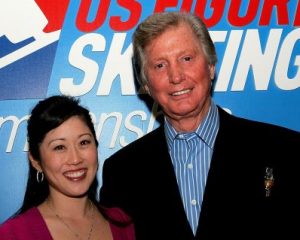 Tom, a former figure skater himself, created and produced the ice skating show, Champions On Ice, which was around for almost forty years! He meant so much to the skating world.  Without Tommy, so many athletes, who had spent years, and a financial fortune, training in the sport since they were kids, would have never made money. And would have had nowhere to perform!

I met him very many years ago through our mutual great friend, and fellow skating aficionado, Angie Dickinson.  Not only did she love his show, but she had always told me what a nice guy he was.  And, boy, was she ever correct about that!  I quickly became friends with his sons, Michael, Marty, and Munch, so the dad came along with the deal. Tom was always a fatherly figure not just to the skaters, but to me, as well.  So many of my male pals’ dads, especially ones in any branch of show biz, were either lecherous towards me, or tried to get in on my friendship with their son.  But Tom never behaved like either of those—he was just perfect. 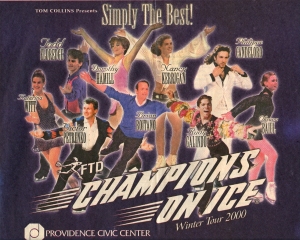 A progam from Champions On Ice.

Not only was he nice to me, but to everyone he met. When I saw the show in Providence, Rhode Island one year, I brought my three little kid buddies with me. Backstage, Tom saw them eyeing the VIP room where food had been set-up. And he immediately told them to go in there and take whatever they wanted! I promise you, no one else would have ever done that! (Or ever has!) They’re millennial now, but still remember Tom’s kindness to them.

That grace extended to others in his business, as well. I never heard him say a bad word about his rival show, Stars On Ice.  I disparaged them to him on occasion, but Tom never went along with my criticisms of it. He just shrugged and laughed whenever I commented a bit negatively about that other show. I so admired that about him.

Tom Collins with members of his skating “family.” (L-R) Brian Boitano, Dorothy Hamill, Kristi Yamaguchi, Tom, Michelle Kwan, Peggy Fleming, Nancy Kerrigan, Katarina Witt. It’s so approrpiate that Tom is the one with the light around him!

For many years, I had the privilege to be backstage at the Champions On Ice shows here in Los Angeles and also in New York and Rhode Island. And in all that time, I never once heard Tom raise his voice. To anyone! Let me tell you–that show was a major enterprise, and Tom presided over it all—setting it up, dealing with each new venue’s personnel, the skaters, coaches, parents, crew, media, and guests. There was so much potential for stress and people messing-up. Yet, Tom Collins kept his cool at all times. What a guy!

Tommy himself performed with Holiday On Ice when he was younger. It is so commendable that he gave back to the sport for the rest of his life. No wonder he was so beloved by every single person he touched.