I was too sick over Prince’s untimely death to write about it right away. But even five days on from the shocking news, I still feel just as awful, as I’m sure we all do. I can’t get used to the idea of Prince no longer being on this level of life.  As I tweeted on the spot, “He was so ageless, I thought he’d be here forever.” 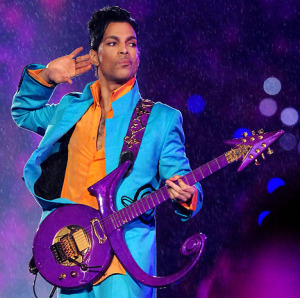 I’m sorry to say that I never did meet him, but I didn’t need to; I liked him just as the icon he was, and not as a human I could actually hang-out with.

But I am so grateful to have seen him in concert twice. The first time is one of my happiest memories, actually.  (I’ll tell you that story at the end, because this tribute is just as my e-zine title states: this one is really not about me.)

After the horrible news, I, just like probably everyone else, felt the need to keep the news stations on, as if that would bring Prince back.  But, I found that, instead of helping in any way, it just hurt more to see his videos that they kept playing almost non-stop. (At least MTV finally had music videos on it again!)  His music has always made me so happy, but, since Thursday, it’s just been causing me pain. (I’ve watched all the many NBA play-off games, and, at every break, that’s all they played, too.)

And I didn’t want to keep hearing about his life. We all knew it already. Well, as much as he wanted us to know. I just want to know what happened now. I don’t know why I’m thinking this, but I have a feeling he knew the end was near. (I just hope his demise is not due to his being a Jehovah’s Witness, which means he may not have sought treatment. But we’ll never know. Nor, actually, is it any of our business.)

One thing I didn’t hear anyone point-out is that Prince’s most famous song, 1999, was prescient. How many artists can say that??? He wrote it in 1982, for goodness sake! And the soirees we threw in 1999 were worth partying like! On top of that, the song itself never sounds old. Really, none of his music sounds like oldies today! (On a shallow note of prescience, I had polished both my fingers and toes different shades of purple…on Tuesday! Two days before he died! And I rarely use those colors. That gives me chills.)

There’s really nothing more to be said.  It totally sucks that we’ll all never get to experience the many talents of Prince ever again.  (Unless someone releases all that music he’s said to have left behind. Let’s hope that happens, even though I think it may just make many of us be even sadder.) 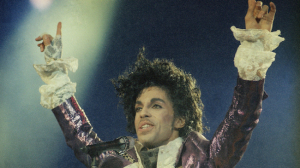 Okay, since there is nothing more for me to say about how sad the entire world is now, here’s my personal story. Though I never met Prince, he was responsible for one of my absolute happiest personal show biz moments.  I really do hate to tell it here because it’s about me rather than about Prince.  But it’s because of his existence, and I love the story, so here goes.  (But please know that, unlike so many others who have been telling their stories in the past few days, declaring that it was about Prince, I know it’s really not. I just feel that it’s appropriate to share in this space today.)

I had started doing my TV show, Karen’s Restaurant Revue, at the height of Prince’s popularity.  During that heady time for me, I had the amazing great fortune of getting to see his Purple Rain tour here in Los Angeles…from floor seats!  I was young and excited.  Always a fan of playing dress-up, I planned my outfit with great gusto.  I wore a purple off-the-shoulder sweater that I had gotten at Cher’s private garage sale.  (That was good enough to begin with, right?)  I accented it with long purple gloves, adorned with a huge rhinestone bracelet.  The whole event was heavenly; I felt wonderful arriving, and the concert itself was stellar.  (The other night, one of my young pals told me that even she knows of it, even though she wasn’t even alive yet!)

As I was leaving the floor at halftime, to go into the VIP room, (which was another fabulous bit for me,) a bunch of young girls who were sitting in the front row of the section just above and off to the side of the floor, called-out in unison, “We love you, Karen!”  I looked-up to see if they were actually meaning me, and was thrilled to find-out that they were!  I had fans—at the Prince show!!! I cannot tell you how utterly fabulous I felt to wave back to them with my purple-and-jeweled gloved hand.  I have never forgotten that feeling.  And, not just this week, but I’ve always attributed that to Prince.  He and that experience go hand-in-hand. (And both of ours were outfitted in those purple gloves! I can’t believe I have that one tiny thing in common with the great one!)

I’d venture a guess that oh so many of you have equally wonderful tales of something Prince/his music has afforded you, as memories of a lifetime.  And who among us, who was alive and old (or young) enough to celebrate on New Year’s Eve 1998-1999, did not play Prince’s 1999 right at midnight, and then for the next several hours! And days!  And party like it, to boot!

So, thank you Prince Rogers Nelson for all you did for the world. You are one person I can say will truly be missed for all of eternity.