The world lost a beautiful spirit last week. My friend Laurel Wiley let her friends on social media know that her always-problematic health was not looking good the week before, and that she’d be looking over us if she left this earth. That does help with the extreme grief a bit; it was very thoughtful of her to to give us that notice. But it still doesn’t seem real. 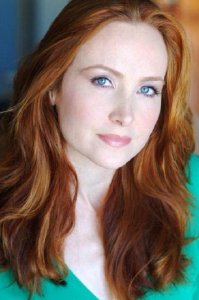 I have several good memories of Laurel to share with you. Most importantly, she was kind. Even in her failing health, she was always on the look-out for guitars to send to children with cancer. And she was always asking her Facebook pals to help others, never herself. Just two days before her passing, she was looking for people to adopt some dogs, and as late as the night before, she started a fundraiser for a friend who was also having health issues.

Speaking of that platform, Laurel was very popular—so many of her Facebook friends had personal pix with her; her circle was not comprised of faceless followers. Laurel was genuinely cared about.

And, of course as even strangers can see, she was one of my absolute prettiest pals. She always looked good, with just a modicum of cosmetics. The smile that was on her face more often than not made her even more attractive.

I met Laurel fifteen years ago this month, through my good friend, Lou, who was her boyfriend back then. I had actually been a tad apprehensive about meeting her, because I rarely had luck with any of my guy friends’ girlfriends; inevitably, even though there was absolutely no reason for this, the girls made their men stop palling around with me. But Laurel got right in there with me from the get-go, and she and I became friends ourselves. That girl did not have a jealous or suspicious bone in her body! 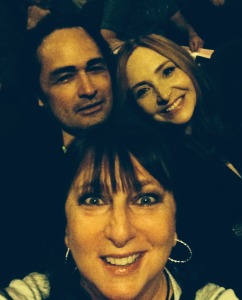 I always laugh when I think of this one adventure that she and I had: Laurel, an aesthetician and cosmetologist herself, and I were on the way up to a ranch high in the hills of Malibu, for an event that involved us receiving beauty services, such as facials and manicures. As she drove us up that steep, winding, terrifying road, we started to get really nervous. Laurel said, “I have an idea. Why don’t we just pull over and I’ll give you a facial myself? I have all my equipment in the trunk. And you can give me a manicure!” We could not stop laughing, as we did, actually, ponder that choice. Of course, we still went on to the event and had a great time. And we giggled all the way back down to Pacific Coast Highway when it was over. And, truth be told, Laurel would have probably given me a better facial then the one I had there!

She always had that same sense of humor, which probably helped her get through all of her lifelong health issues. Laurel had left Los Angeles for New England a while back, so I didn’t see her much for several years, but then she returned here for a visit in late 2014. When we went out one night, she told me this story: She and Lou, (now her good friend,) had visited a big costume shop a few days prior, and while there, he had misplaced his car key. They looked for it for about an hour and a half, to no avail. And after having to hassle a lot to get his car towed, etc., they noticed the keys in a selfie they had taken in the now-closed shop! I was horrified at the tale, knowing that if it had happened to me and someone, we would have been at each other’s throats about it. But Laurel was not only laughing during the entire telling of the saga, she said they were also in stitches while living it!!! I asked how she could not be upset over that incident, and she said it was just fun and funny! What a great outlook she had. 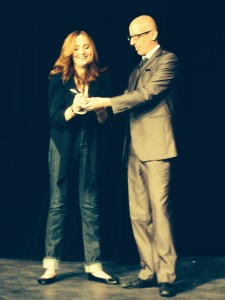 On that same trip out here, Laurel, Lou, and I went to see a show that I had not told her the topic of. On the way there, she told me that she had just chosen a new career path—she wanted to be a magician’s assistant! I asked her how she was planning to go about that, and she had no idea. When we got there, she finally found-out that it was a magic show! She could not contain her excitement! So the second they asked for a volunteer, her hand shot up and she ran on stage. And she was actually really good at being a magician’s assistant! I’m sure it didn’t hurt that’s she was a tall, thin, sexy redhead! (But she gave up that career choice pretty quickly—I don’t think there are tons of magicians where she was living in Kennebunk, Maine.)

And now I have a feeling that she’s bringing all those great attitudes to the afterlife. Laurel had just updated her Facebook profile picture to a peaceful ocean scene the morning that she left this level of life, like she knew it was about to happen, and wanted us to have something serene to see when we went to her page to leave messages. Yet another kindness on her part. 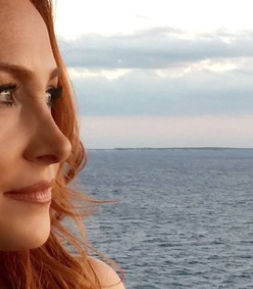 I’ll leave you with this video of Laurel singing an incredibly haunting song. She recorded it way before she knew what was coming, but it really does sound like she’s singing it to us from the other side. I listened to it that night that she became a full-time angel, and several times since. It comforts me a bit, so I hope it will do the same for the many who loved her: www.youtube.com/watch?v=Yls9i-tjuLw.