Even though I’ve lost some very dear friends recently, (including right before Larry,) the death of Larry Davis, who helmed an on-line magazine called Splash, has been the most shocking to me. I still can’t believe it.

Although we were not “friends,” per se, I actually saw Larry Davis more then I saw my own very close friends because, as both being the heads of on-line magazines in Los Angeles, we were invited to so many of the same events. No exaggerating, we ran into each other two to five times a week! And the man always had a smile on his face! 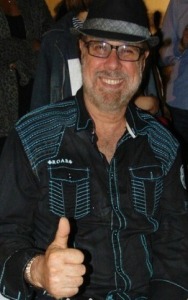 I first met Larry many years ago, when he came up to me at an event and stated himself to be a fan of my show, Karen’s Restaurant Revue, and then asked me, “Are you reviewing this place?” I actually was, so we had a little laugh, he handed me his business card, and I thanked him for the kind words.

After that, I started seeing him every place I went! He told me that he had an on-line magazine, and asked me to write for it. Being so busy with all my other projects, I had to turn him down. But God bless him, every single time I saw him after that, (and trust me, there were many!,) he re-iterated his request for me to have a column on his site.

So this past December, I told him that I would finally speak to him about it seriously in the middle of January, right after the Golden Globes. But that was not to be.

In the last few weeks of December, there are fewer professional activities in Los Angeles than usual, so I actually hadn’t seen him for a few weeks. And then the Golden Globes gifting suites were last Thursday and Friday, January 9 and 10th, and I had every expectation of running into Larry at them, as I’ve always done.

I went to the first suite on Friday, and he wasn’t there, but he could have just been at a different one at that time, so I didn’t think much of it. Then on Saturday, I was at another lounge when I saw the words “LA Splash” on someone’s clipboard, which meant that Larry couldn’t be far behind. I looked up to say hi, but couldn’t find him. I was a little surprised, because I knew that he would never send anyone to a gifting suite in his place; he loved all that stuff.

I went home, and after a very traumatic twenty-four hours, while finally calming down and live-tweeting the Golden Globes, an email caught my eye; it was, very sadly, the shocking news that Lawrence Davis was no longer with us. I literally get sick to my stomach, and screamed out, “Oh no!”

It appears that just the Thursday night before the suites, he had climbed onto his roof in the Hollywood Hills to fix something, and had fallen off. It was that sudden. And so sad.

The only comfort that I think any of us who’ve known him for all these years can take from the situation is that he appeared to have more fun than any other man in Los Angeles. I don’t know another male who was out and about as much as Lawrence Davis. I ran into him at restaurant openings, and play openings, and just about every party I’ve attended in the last eight years. And, though he always told me that he wanted to meet a nice Jewish girl and settle down and have kids, he prided himself on showing up to these events with a different attractive woman on his arm. Sometimes even two! (So much so that I had to look high and low to find a picture of him by himself to post with this tribute!)

He always made me jealous by talking about his close-knit family, and how lucky he was that his mother lived to be ninety-eight. And I actually don’t think, in all the times we chatted, that I ever heard him complain about anything, even once! That’s pretty rare, especially in this town.

So when my shock and extreme sadness, at knowing I’ll never see Larry again on this level of life, wear off, I will always remember him with a smile on my face, to match his. And chuckle a bit to myself at the thought that he had more fun in his life than people who live to be a hundred!