Last week, the movie industry lost one of their icons, Charles Aidikoff.  He and I had been pals for about two decades.  And, although he lived to be a hundred-and-one-years-old, (yes, you read that right!,) it was somewhat of a shock to me.  I seriously thought he would outlive us all. 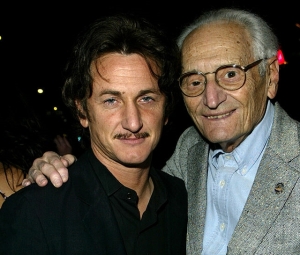 Chalres Aidikoff with Sean Penn, one of the many celebrities on his wall.

Charles owned and ran his eponymous screening room on Rodeo Drive since before most of us were born!  It seemed like he was pals with everyone in town.  For as long as I knew him, Sunday was family and friends day at his place.  And no one loved the movies more than Charles.  He sat in the back row of his private fifty-three seat theatre, and watched every film along with the rest of us.  But he was usually seeing each one for at least the second time!  I asked him how he could bear to watch some of them again, and he answered, “I love movies.”  Period.  That really explained it all.

One year, we discovered that we’d both be in Brooklyn at the same time, so he suggested that we get together and go around to all his old haunts there.  (And he was already eighty-three at the time! That man had more energy than anyone ever!) So, Charles and a mutual gal pal came over to my house in Midwood there, hung with my parents for awhile, (he and my father were in heaven talking about the old days,) and then he drove us all over the borough. We saw the house he grew up in, (I can still hear him telling me, in his inimitable style, it was at “Cropsey and Stillwell Avenue,”) and we visited Coney Island, Sheepshead Bay, Bensonhurst, and Bay Ridge.  (Or what I refer to to as “the real sections of Brooklyn!”)  He then drove us around Manhattan, showing us where he first thought of starting his screening room, before moving out here to Los Angeles, (luckily for us.)

Just walking into his place on Rodeo Drive was special.  The walls were adorned with tons of pictures of Charles with every ilk of famous person imaginable, going back decades.  He loved his celebrities!!!  And everyone loved him.  Every time I’ve ever mentioned “my pal with a screening room” to anyone in Hollywood, they always say, “Charles?” 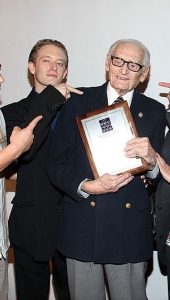 Chales with one of his many commendations, along with grandson, Josh.

And he was appreciative of regular person kindnesses, too.  He always lauded me for giving him holiday and birthday gifts.  He and I were both appalled by how few people he hosted on a regular basis ever gave back!  Plus, he always had candy out for his private screenings, and some of us brought extra treats every few weeks.  Whenever I did, instead of taking it for granted, Charles made sure to thank me, and wonder aloud why so many people never thought to do it.

And no one enjoyed a night out more than Charles.  Always!  That man loved a party!  And he always dressed-up for them.  He never missed any of mine, and I bumped into him at many events and fetes in Beverly Hills.  My pals and I always chuckled that he loved them so much.  (The parties, not my pals, although those too.  Trust me!  That man appreciated beauty and fun.)

One year, he even threw my birthday party at his screening room!  He actually insisted on it; he was even more into it than I was!  I had always wanted to have one there, but, as Charles was very popular, I never wanted to ask because then everybody else would bug him, too.  So, I was shocked when he practically begged me to have it there!  And it was fabulous.  Mr. X constructed a plastic dance floor in the party room, and we ran several episodes of Karen’s Restaurant Revue, my TV show at the time, throughout the night.  People could party for a bit, then go into the theatre and watch me for awhile, and then go back to partying.  It was all great, and I promise you—no one had more fun than Charles.  When I thanked him profusely for throwing me the fete, he answered, “No, thank you!”

He included me in on so many of his outside events, too, which I really enjoyed, especially his many black tie banquets.  One year, he even invited me to all the Golden Globes parties! That was a blast.   And he loved volunteering me to review restaurants for my show.  I met a lot of people I still currently know through Charles Aidikoff; he was truly someone who bought people together. 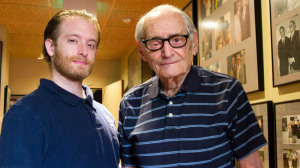 He dearly loved his family, and was so proud that his beloved grandson, Josh, followed him into the business.  They were such great buds that it always brought a smile to my face to see them together.

Charles was a man who truly lived life to the fullest. When I asked him his secret to longevity, he answered, “You have to love what you do.” And that he did, more than anybody I’ve ever met. What a life he had!