When I read the shocking news last week that the perceived-to-be-indestructible Ruth Bader Ginsburg had died, I immediately started crying. And couldn’t stop for quite awhile. I have a feeling that was also the reaction of most Americans. The news was devastating, heartbreaking, and soul-crushing. There’s almost nothing else to say. (But you know that I will find a few more words.)

Besides that I feel awful for the Supreme Court Justice’s family and friends and admirers, I’m heartsick for our country. I almost feel defeated. But I know that we must pick ourselves up and carry on with the strength that RBG had, in her memory. She fought so hard to stay on this level of life, to prevent Orange Hitler from filling her spot on the Court with one of his fellow Nazis, before a new President can be elected. (Knock on wood to that last part. From my mouth to God’s ears.) That wonderful woman held on as long as she could.

Before I bring you a few little tributes to her from other people, I want to celebrate some of what Ruth Bader Ginsburg and I shared in life. 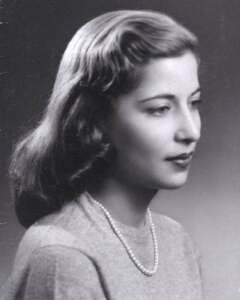 We’re from the same neck of the woods. Not just from the borough of Brooklyn, but from the same neighborhood— Flatbush! My educator father’s best friend was even the principal of the high school Ruth attended, James Madison, which was just fourteen blocks away from my own school; I drove by hers on just about all my visits home since I moved out to LA as a teen-ager. And she was born in the hospital my mother died in! (Yes, I know—that seems like a very sad one, but somehow that symmetry makes me feel a tad better; it’s now-hallowed ground to me, on both levels. The fact of her birth helps alter my pain of thinking about the place.)

And OMG—I just found-out that…RBG and I were sorority sisters!!! I have never in my life been proud of being in AEPhi, until this very second of that discovery. Now I’m all over it!

And she was “confirmed” (which is what a bat mitzvah was called back then) at the same place my brother were bar mitzvah-ed–the East Midwood Jewish Center, just ten blocks from my house. 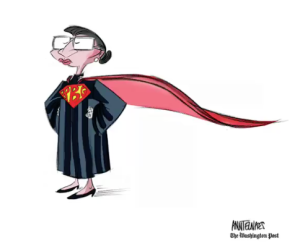 I love this cartoon.

I adore that we share these coincidences. But her brilliant and always-fair being is something that I, and most of us, can only aspire to.

As to what some others have had to say to laud RBG since last week, I love that each person had a different and lovely way of paying tribute to her. There were a few comments on Facebook that especially caught my eye. My friend, dancer Jamie Nichols, summed-up a lot of our feelings perfectly with, “This is a devastating loss to humanity in this insane country—a monument to what a woman can be and who we are.” Another pal, comedian Elayne Boosler, eloquently wrote, “Thank you for leaving this world so much more just, fair & better than you found it. Thank you for fighting all the good fights for those of us to whom those fights meant life or death, success or failure. What a life well lived.  May you rest in peace.” Actor Ray Buktenica wrote simply, “RBG…OMG,” on a background of teardrops.  Exactly. 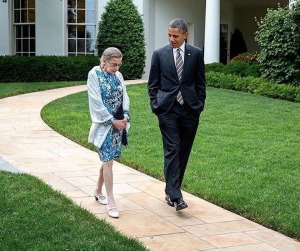 Ruth Bader Ginsburg and President Obama at the White House.

Amongst a longer tribute, President Obama wrote, “Justice Ruth Bader Ginsburg fought to the end, through her cancer, with unwavering faith in our democracy and its ideals. That’s how we remember her.”

My favorite, though, is what Ruth Bader Ginsburg herself had said while still on earth: “I would like to be remembered as someone who used whatever talent she had to do her work to the very best of her ability.” That you did, Notorious R.B.G., that you did.

RIP, Ruth Bader Ginsburg. Eternal thanks and respect for making the world a better place for us all.