Even though I hadn’t seen him in many years, I was very saddened by the recent death of prolific actor, John Saxon. 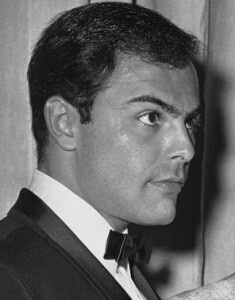 Growing-up, I knew of him as a screen heartthrob. And he was, indeed, equally handsome in person. I know that because, down the line, I had the good fortune to work with him. Twice. He was a lovely man.

John Saxon and I met when I was a guest on an afternoon talk show that he was co-hosting for the week. Because he always looked so serious in films, I was actually intimidated when I learned that he’d be a part of my segment. Which was cooking! Which I did not do at that point in life. At all!

Because I was a restaurant critic on TV, people assumed I could cook. But, of course, I could not—that’s why I was a restaurant critic! So I could go out to eat all the time. But when that show’s talent coordinator called to book me, she first asked, “Can you cook?” Since I didn’t want to lie with an answer in the affirmative, I got out of telling the exact truth with the vague reply, “Who can’t?!” So when they gave me a date to appear on the show, I came up with the brilliant idea to cook a dish from my favorite restaurant. Clever, right?

But when my less-than-exemplary cooking skills weren’t working-out perfectly, (or even close to it,) on air, John was very supportive. He told me I was so funny, even though it was the one time I was hoping to not be! He put me at ease before the segment and made me feel better after it.

Without even a modicum of hitting on me, (which was far from the norm in those days, trust me, and I really appreciated it,) John asked me to be on an Ellery Queen magazine cover with him a couple of weeks later! I couldn’t believe it. After years of modeling when I was younger, this would be my first magazine cover! 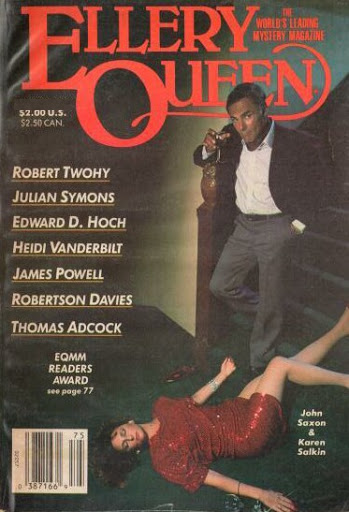 John Saxon and Karen Salkin on the cover of Ellery Queen magazine.

Before I got too excited about the upcoming shoot, John told me the concept for it. He would be at the bottom of a staircase with a drink in his hand, looking all mysterious, and I would be…on the floor at the bottom of it! Deceased!!! But somehow, even though that meant that no one would get to see my baby blues, I got a giant kick out of it. (Come to think of it, he may have asked me to join him, over his other gal pals, because he knew that I would find it amusing.)

Despite the story being that he had just pushed me down the stairs which killed me, we had such fun that day. John never once made it seem like it was his gig and that I was just along for the ride. He ensured that we were treated as equals in the endeavor from start to finish. I was so grateful to him for giving me that respect.

After working together twice in a few short weeks, I always assumed we would do it again sometime. But, alas, it was not to be. Life just moves too fast in some regards, and last week I read the shocking news that John Saxon had died. Where has the time gone?

My heart goes out to his loved ones. I’m glad that they, and the world, got to enjoy John’s presence for so long.