Even though he was ninety-eight, I literally gasped when I read that beloved show business legend, Carl Reiner, had passed away. It’s been a little over a week now, and I’ve finally been able to form into words my admiration of this icon, who was always so lovely to me. 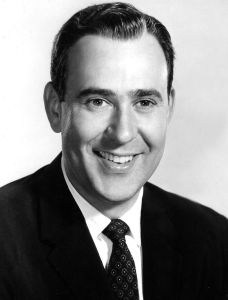 I met Carl back when I was first doing my local television show. He came up to me at an event, (which was in a Century City deli,) and asked, “Are you that girl on TV?” (That’s how people referred to me back then, like I was the only female on the tube. But I always knew what they meant. And appreciated it.) And then, to my lifelong delight, he said in his Carl Reiner way, “You’re very funny!” I’ve been living off that since then.

That was so generous of him to do for a young girl, just starting out in her career. Carl Reiner had long been established as a major show business force, first as half of a comedy duo with Mel Brooks, and later as the creator-writer-producer of (and occasional actor on) the iconic The Dick Van Dyke show, with tons of big jobs in-between. 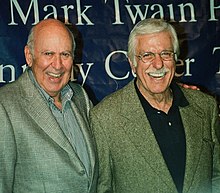 (L-R) Carl Reiner and Dick Van Dyke, many years after their show.

After that first meeting, I bumped into him from time to time, and he was always darling to me. He even invited me to see his wife, Estelle, perform her cabaret act at a little club in town.  And even though he was as nervous for her as Mr. X always was watching me perform, he had the kindness to take me around before the show to introduce me to several of his friends and compatriots. I’ll never forget that night.

So, to be supportive back, I attended a few of his songstress wife’s subsequent shows. As much as I enjoyed her performances of classic songs, I got the most kick out of watching Carl watch her. He was absolutely filled with love for Estelle, every moment. What a love story! They were married for almost sixty-five years, until her death in 2008. (That’s amazing, on any level, but especially since she was almost eight years older than Carl! He got married at just twenty-one, and went all through his illustrious career with just one woman. That’s a show biz miracle, in my book. And a perfect example of true love, and what soulmates are.) [Note: I was hardly able to find a photo of them in which he does not have his arm around her! I love that!] 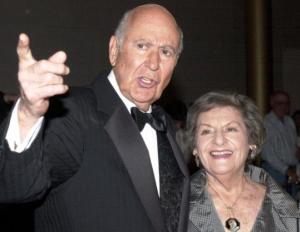 I had one other memorable experience with Carl. We were at the opening night of a major musical in town, one about old Hollywood. Just about every single person I had grown up watching on the big screen was in attendance that night. I bumped into Carl in the lobby and he told me to find him at the party, so he could introduce me to Sid Caesar! I almost passed-out.

So, the party was one of the best I had ever been to. And, since my little TV show was at the height of its popularity right then, many of the guests were coming up to me all night, which, of course, I adored, but that fun caused it to become later and later to get over to Messrs. Reiner and Caesar. My less-than-chivalrous and very antsy date said he was leaving then, with or without me. But, even in a time without being able to call for a car service, (firstly because there were none in those days, and secondly because we didn’t have phones to do it with!,) I chose to call his bluff (or so I thought) because I was anxious to go over to Carl’s table. 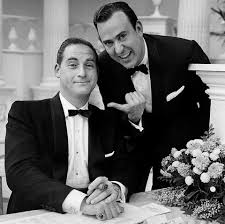 So I did, and was rewarded with the warmest welcome from him, and being gloriously introduced to Sid Caesar! What a memory for me to have. I’m beyond grateful for it. (And yes, my date did leave me, without even letting me know, so I spent about an hour looking for him before giving-up and bumming a ride from a semi-acquaintance. But it was all worth it. And, very shockingly, we’re still friends today!) [Note: By the way, Sid and his wife got married in the same year that Carl and Estelle did, and lasted forever, as well! Talk about simpatico!] 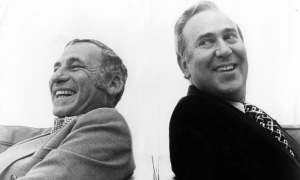 I wish I had known Carl Reiner longer and better. I hadn’t seen him in a while, but have always been a fan of everything he’s had to say, especially his hope that this country will get better with a new President in the Fall. If that does come to pass, (as every normal person prays that it will,) I’ll be sad that Carl’s no longer on this level of life to celebrate with us all. But I feel that somehow he’ll know.

In the meantime, I’m heartbroken for his family. And what a loss for the world. But I’m grateful that we had this brilliant man around, and still going strong, for almost a century. And I’m happy that he’s now reunited with his beloved wife, Estelle.