Trending
You are at:Home»TRIBUTE»TRIBUTE: ASPEN TRIBUTE TO MY MOTHER
By Karen Salkin on January 25, 2012 · TRIBUTE

ASPEN TRIBUTE TO MY MOTHER

Today is a month since my precious little mother went to heaven. I can’t believe it’s been a month since I’ve seen her. When I’m here in LA, that’s not strange because it’s usually at least that time between my month-long visits to her.

But I call her about ten times a day, literally, so not being able to talk to her anymore is incredibly sad to me. She was always my first thought when I woke up, and I called her at the drop of a hat: to read my daily column, to let her know what was on TV almost every daytime hour, to say what I was going to do that day (or had just done,) and to tell her the news of the world. (She would have loved that Lindsay Davenport just had a ten pound baby! And that Roger Federer just played his 1,000th match…and won!)

So, I’m still really suffering. I had thought the pain would ease up a little when I was back in my basic L.A. life, but, really unfortunately, that hasn’t been the case. 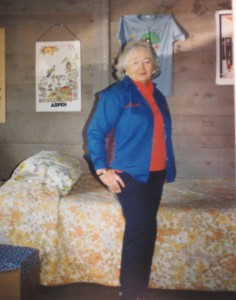 So, I feel it’s time for another small tribute to her. Since she had spent many summers in Aspen, writing daily poems to the editor, and bringing a smile to all, (except for the town grumps, though I feel they were perhaps smiling in private,) The Aspen Times published their own tribute to my mother two weeks ago. As lovely and appreciated as it was, it was incomplete because I had missed my opportunity to speak with the reporter, which caused me great pain. I lay on the couch crying and screaming over it…for two hours!

So, I really must thank the editors of The Times for including a follow-up letter that I wrote this past week. Here are the highlights from it, which feature some of my mother’s best Aspen shenanigans, which viewers of my show may recall hearing about in detail over the years:

The short versions are these:

–She called 911 because I found a mouse in our cabin at Christiana Lodge! It was nutty, but it’s the reason we became friends with the wonderful, (and handsome, a fact that was not lost on either of us,) Aspen police force!

–One day, a bear ran towards me outside our cabin at L’Auberge, (where were stayed for the last four summers of our Aspen inhabitance ,) and by some miracle, stopped, looked at me, and ran away. My adorable little mother exclaimed, “Did you see that big dog???”

–She was upset when some “tipsters” called the newspaper’s tip-line and declared my mother was Elvis, offering as proof that “when you play her poems backwards, you can hear her say, ‘I am Elvis!’ ” The rest of us were hysterical over it, but she thought it was just “crazy.” (I’m laughing over this one even as I write.)

–One afternoon, she ran into our cabin and told me we had to hurry to the hospital. I thought something was wrong with my father, but no—the lady from the gift shop had called and said new Beanie Babies had just come in!

–When she penned a ditty about the cracked sidewalk in front of a sportswear store, they immediately re-did the offending panel, with this message “engraved” in the wet cement: “Dear May Rose, does this ease your woes?”

–And of course, what Coloradan can forget the story the Denver 9 News did on the hubbub surrounding her daily poems in the Aspen newspapers? She looked so adorable in the television feature, writing poems and laughing as she did so. The icing on that cake was that, after the segment on my mother, the anchor introduced their next report by saying it was yet another literary saga—about a long-lost volume from Chaucer!!! Who would have ever thought that the literary musings of May Rose Salkin would be the lead-in to those of Chaucer! Think of it–the man who’s widely considered the greatest English poet of the Middle Ages being preceded by my mother, the greatest middle-aged poet! In my heart, at least.