Trending
You are at:Home»MUSIC»THEATRE/MUSIC: THE WALLIS ANNENBERG CENTER FOR THE PERFORMING ARTS VIRTUAL DREAMBUILDERS ANNIVERSARY GALA
By Karen Salkin on December 9, 2020 · MUSIC, THEATRE

I’m sure that my regular readers know that the Wallis Annenberg Center for the Performing Arts in Beverly Hills is one of my favorite theaters of my entire life. So when I was invited to watch their recent virtual Anniversary Gala, I jumped at the chance, which is odd for me because I don’t love watching anything online. 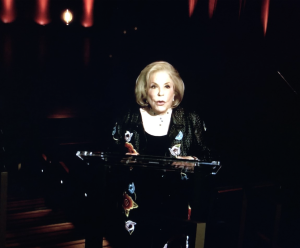 The kind Wallis Annenberg herself, who has done so much for so many. Photo by Karen Salkin, (off the screen.)

I know that it takes a lot more of my time to take off my pajamas, jump in the shower, put make-up on, get dressed, choose the evening’s jewelry, pack my purse, and get to a theater and back, than it does to sit in front of a computer, but there’s just something about live theater that makes it worth all that effort.

So even when a show I really want to see is on-line, such as a ballet, or Cirque du Soleil, (which I hope will still be operational by the time the world gets back to normal,) I’m not a fan of watching it on my computer. I know some of these things can be transferred over to my big screen TVs, but I don’t know how to do that, and I really don’t have the energy to learn. And I rarely even have the time to participate in anything online.

But when I saw the invitation for this particular engagement, I was in. Not only do I always want to do everything I can to support the wonderful Wallis, but the list of performers was juicy enough to pique my interest. 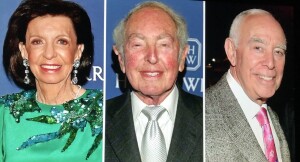 The trio of Wallis Gala honorees: Vicki Reynolds, Paul Selwyn, and the late Richard Rosenzweig. Photo by Karen Salkin, (off the screen.)

So before I give you my review of the actual show, I have to tell you the purpose of the Gala, and just whom they honored. Even though it didn’t open until 2013, this was the twenty-fifth anniversary of the theatre’s founding. (Hey—it takes awhile to get enterprises this big off the ground!) The evening honored three kind visionaries who helped shape the Wallis dream into a reality: the late Richard Rosenzweig, Vicki Reynolds, and Paul Selwyn, (whom I actually sat next to at a dance show at the theatre last year, and had a delightful conversation with. And boy, did he downplay his important role in this endeavor! I had no idea from our convo.) I was happy to see the uber-philanthropic Wallis Annenberg herself speak a bit; she’s the person from the Gala whom I would have most liked to see in person. But she did not look old enough to have a building named after her already!

By the way, one of the major topics discussed that night is that the edifice used to be the Beverly Hills Post Office. I didn’t need even one tiny reminder of that situation; I reflect on it every time I even pass by the building! 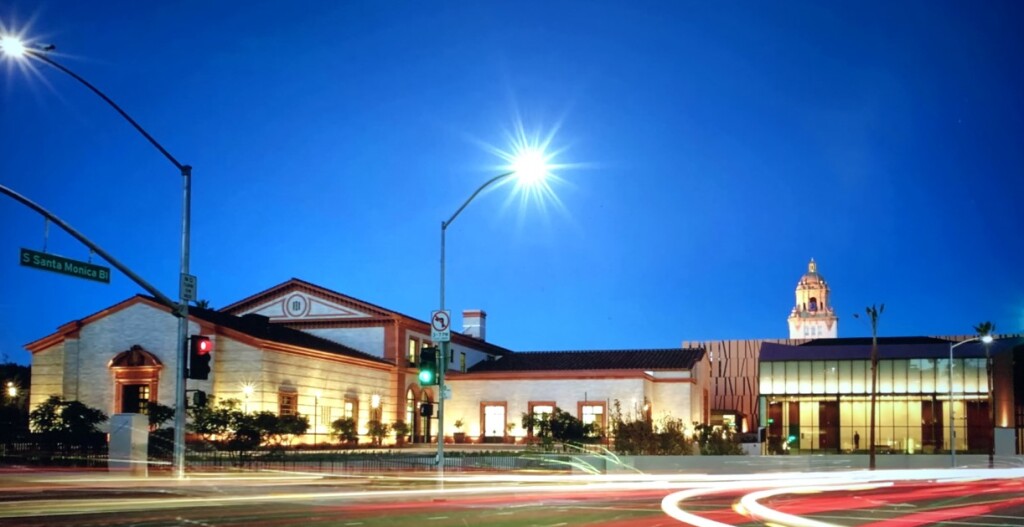 The Wallis. Photo by Karen Salkin, (off the screen,) as is the image at the top of this page.

Now to the Gala itself, which, as I mentioned above, was presented on-line this year. Debbie Allen and Nigel Lythgoe did little bits throughout, and book-ended the whole show. However much I respect them both, (anyone involved with bringing dance to the masses is okay by me,) I have to say that they really needed to be wearing their masks the entire time, and not just holding them! [Update: The theatre’s marketing team has since let me know that Nigel and Debbie had both just been tested prior to the event, so they felt comfortable filming so close together and without masks.]

But, I was happy to see that most of the performers who were on-site were either properly distanced and/or masked-up, so I didn’t have to spend much time being nervous for the people involved. I appreciated that.

I also appreciated that the theme appeared to be “hope,” which is what we all need right about now. 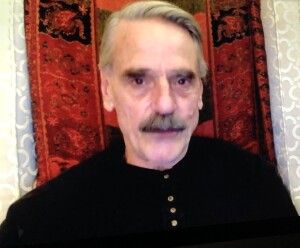 To that end, Jeremy Irons, (who starred in a recent Wallis production of Long Day’s Journey Into Night,) recited the Emily Dickinson poem, “Hope” is the thing with feathers, complete with little actor-perfected voice trills at the end of sentences. I loved that!

And there was even a violinist with that very name–Hope! Daniel Hope provided stunning music for us. Some people may be surprised by this from my hip-hopping self, but I absolutely adore beautiful violin music! It gets to my soul more than any other instrument. (I actually wrote a screenplay treatment based on hearing some of the lovely strains in a private concert a few years ago. Now if only I could find those notes in my way-over-filled house! And no, it’s not in the Cloud–I wrote it in longhand because I erroneously thought it would be safer that way! How nutty of me.) 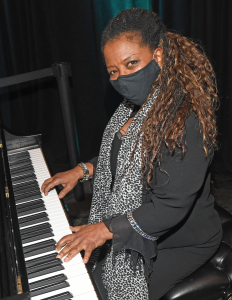 My favorite performance of the presentation was Patrice Rushen playing…concert piano!  Who knew? (Actually, most likely everyone; her list of musical accomplishments is jaw-dropping!) I’ve always felt a bit connected to Patrice because back in the day, she was the Musical Director on the worst talk show I have ever guested on.  But she played great music for me to dance out to, and smiled when she saw me Roger Rabbiting, (or whatever I did back then); she was the one bright spot for me on that awful TV show. So I was thrilled to rediscover her on the Wallis Gala. But even though I thoroughly enjoyed her jazzy piano stylings, I have to admit that I was a tad disappointed to not hear her sing Forget Me Nots! (No worries, though–Mr. X and I could not stop singing it ourselves for the rest of the night. And the next day. And this morning.) 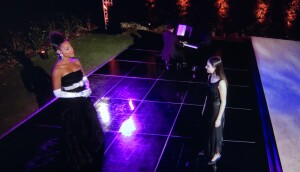 American Idol alum Tamyra Gray and Lily Zager, (who is a student in TheWallis’ Broadway Dreams program,) sang one of my favorite Broadway tunes, For Good from Wicked. I guess that Lily’s Broadway dream came true that night! (Or as close as we can get to it during the pandemic.)

The musical portion of the presentation ended with a very tatted-and-bearded Adam Levine singing from a remote location. I love his song, Sunday Morning, so, despite the dark black beard and tats, (which I was hoping were just tattoo sleeves!,) that concluded the night on a high note for me. 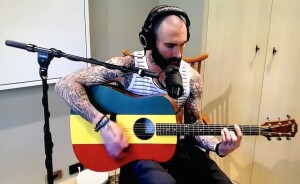 On a personal note, I watched every single one of the closing credits, as I do with all the films I see; people put in a lot of hard work on it, and in these uber-challenging times, to boot, so the least I could do is respect them. And I was rewarded with seeing the name of the fabulous Director of Marketing and Communications, Joel Hile, who is the reason I became aware of this venue to begin with! Without him, I would possibly still be trying to mail letters there! Just seeing his name in the Gala’s credits gave me hope.

Speaking of hope, I hope to see all of my SoCal peeps back at The Wallis as soon as we can all gather again. From my mouth to God’s ears, right? (Or at least to those of Dr. Fauci!)