Trending
You are at:Home»MUSIC»THEATRE/MUSIC: BLUES IN THE NIGHT
By Karen Salkin on May 7, 2018 · MUSIC, THEATRE

BLUES IN THE NIGHT

Here’s a heads-up for how good my review of Blues in the Night is going to be: The friend I brought with me said it’s the best show she’s ever seen!!! And I really enjoyed it, as well, much more than I even expected to. 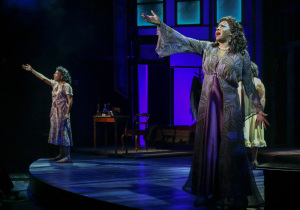 Bryce Charles and Paulette Ivory, (with Yvette Cason peeking out in the back.) Photo by Lawrence K. Ho, as is the one at the top of this page.

I have to admit that I was exhausted on opening night, so I figured that since it’s a songs-only production, (which means no dialogue,) I would close my eyes for a little bit during the performance, and just listen. But the music is so good that I had to practically be held back from jumping up and cutting a rug right then and there!

Other than that, I don’t even know what to tell you first; everything about this presentation at The Wallis’s Lovelace Theatre is perfection! 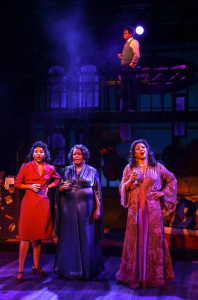 So, we’ll start with the musical’s inception. Way, way, way before my days reviewing theatre, Sheldon Epps (who seriously does not look old enough to have been working in the biz that long,) created Blues in the Night in New York. It went from off-Broadway to Broadway, where it got nominated for a Tony.

Blues in the Night is hard to describe, so you’ll just have to see it for yourselves. Because of the all-music format, I guess that some might consider it a revue, but there’s so much more to it than that. The staging is such that we feel that there’s really a story there, even though there is rare interaction amongst the cast members. Sheldon directed his own creation here, so he positions the performers interestingly at all times. 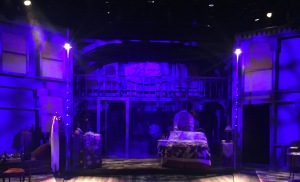 The set before the lights go up. Photo by Karen Salkin.

And he has so much to work with because John Iacovelli’s set is absolutely gorgeous. And bluesy. We see three rooms in a hotel, of sorts, which the program tells us is in late 1930s Chicago. Everything about Blues in the Night—performances, song choices, set, wardrobe, music, lighting—evokes the era perfectly, which is such a welcome break from the troubles of today.

There’s also dancing, comedy, fun wardrobe, and even some surprises. When it was over in just two hours (including intermission,) the entire opening night assemblage wanted more, and I’m assuming all audiences are following suit.

The two dozen or so musical numbers are old blues songs, (hence the moniker—but what if you see a matinee—is it still blues in the night???,) from artists such as Bessie Smith, Duke Ellington, and Alberta Hunter. It’s a great mix of songs, only three of which I’ve ever heard before. There are torch songs along with upbeat tunes, and many really funny ones, too, (some of which are disguised comically-about-sex numbers.) 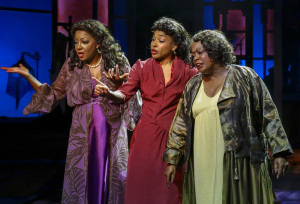 The cast is three terrific females, (Yvette Cason, Paulette Ivory, and Bryce Charles,) with Chester Gregory as the lone male representative. (After all—the women need someone to sing the blues about!) What a talented group. They’re each excellent on their own, but during the few group numbers, their voices blend together beautifully, whilst the individual tones can still be distinguished from each other. I’ve never thought of sound mixing in a theater before, but I did here because it’s so exemplary. I assume that’s all thanks to the sound designer, Cricket S. Myers. 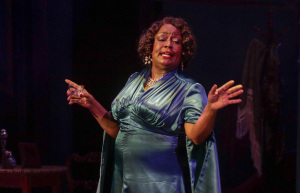 But I think I speak for everyone when I say that Yvette Cason is the big hit of Blues in the Night. Hers seems to be the featured role, and she makes the absolute most of it. I’ve seen her in a few previous productions around town, and always recognized her talent, but my admiration grew immensely from witnessing her performance here. Her rendition of Wasted Life Blues in the second act brought down the house! (And she sang it not while standing, but sitting on a bed, which is so much harder to do.) I thought my friend was going to have a heart attack from it! (And this is what I did in the middle of the song—I realized that I’d love to know what it would feel like to sing like that for even one second of my life. So I closed my eyes, and made believe that Yvette’s voice was coming out of me, and because of the amazing sound system in the Lovelace Theatre, it actually did work for a second. And it was miraculous! You’re welcome to try it for yourselves to see what I mean. The only thing I had the blues about that night was that I can’t sing like any of them!) 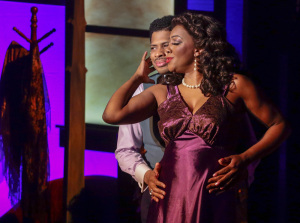 And if I could sing, I’d be thrilled to have this sextet of onstage musicians to work with! They are fabulous! On some other night, they’d be fun to listen to on their own. (Minus my dulcet tones, of course.) In this show, they’re in the background, but still lit enough so that the audience members can watch them whenever they so choose. I admired them so much that I planned to hang behind and listen to them if they played a bit longer than the curtain call, even if that meant being late to the opening night party.

Yes, you did read that right! I’ve known Sheldon for a long time now, and he teases me for reviewing the soirees as much (if not more than) the actual shows. So it’s strange that for his show, as fun as the reception was, all I could think about when I got home that night was the stage presentation! That should tell you how outstanding Blues in the Night is! 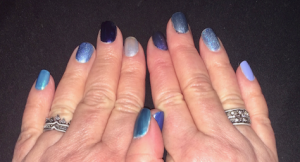 But, okay, just so you all know that I’m still me, here’s my one shallow statement about that night, and it’s accompanied by a visual. Look at my nails in the pic to the left, and tell me why I polished them that way. In case you can’t tell, each nail is a different shade of blue. So, what are they portraying, (against that black background, to match the color of the frock I wore to the theatre)? Blues in the night, of course!!!

None of you has to go that far, but please do go see the real Blues in the Night at The Wallis. Just don’t expect to be blue yourselves, because I predict that you’ll be smiling for several days afterwards.