Trending
You are at:Home»MUSIC»THEATRE/MUSIC: BILLIE HOLIDAY: FRONT AND CENTER
By Karen Salkin on August 2, 2019 · MUSIC, THEATRE

This is a lovely show at a very interesting and attractive theatre in North Hollywood. The excellent sightlines are made even better by the comfortable seats, of which there are no bad ones. And it’s located in one of the most happening areas of town, nightlife-wise. 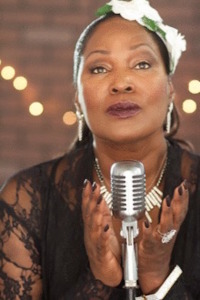 Sybil D. Jatta. Photo by Scott Morgan, as is the one at the top of the page.

Billie Holiday: Front and Center is a one-woman show that’s even better than what I was expecting. I had assumed that it would be just singing, which would be good enough, especially with the beautiful voice of the performer, Sybil D. Jatta. So I was surprised to see a complete story. (But you know it’s a depressing one; that’s what Billie Holiday’s life was, for the most part.)

Sybil takes us on a tour through almost Billie’s entire life, from age ten until her untimely death at forty-four. And Sybil portrays every single character, usually showing us both sides of a conversation. I don’t remember the movie Lady Sings The Blues, so this narrative was all new to me.

My only tiny problem with the tale is that my post-show research is at odds with several of the life episodes shown in this play. Obviously, Sybil has done way more extensive research than I did, but when there are a couple of sides to a story, it just confuses me—I always want to know the exact truth, not the maybe truth. (I know that can never be done, in reality; I’m just wishing it could.)

But I say just let that go, and enjoy the beautiful live music. Sybil really channels Billie Holiday when she sings, so the songs are a joy. And there are over a dozen of them in this show, which showcase some of Holiday’s greatest hits, including the classics God Bless the Child, Strange Fruit, All of Me, My Man, and Good Morning Heartache.

And the quartet of live musicians right on the intimate stage makes the show even more special! Fritz Wise on drums, David Patterson on sax and flute, and Michael Saucier on bass are led by Musical Director Casey McCoy, who plays a mean piano. It’s a treat to hear such excellent live music so close-up! (Musicians in general are magic to me! How do they do what they do? My musical expertise peaked with the one-handed piece, Putt Putt Putt Goes The Flashy Speedboat, so everything else in the art is a mystery to me!) 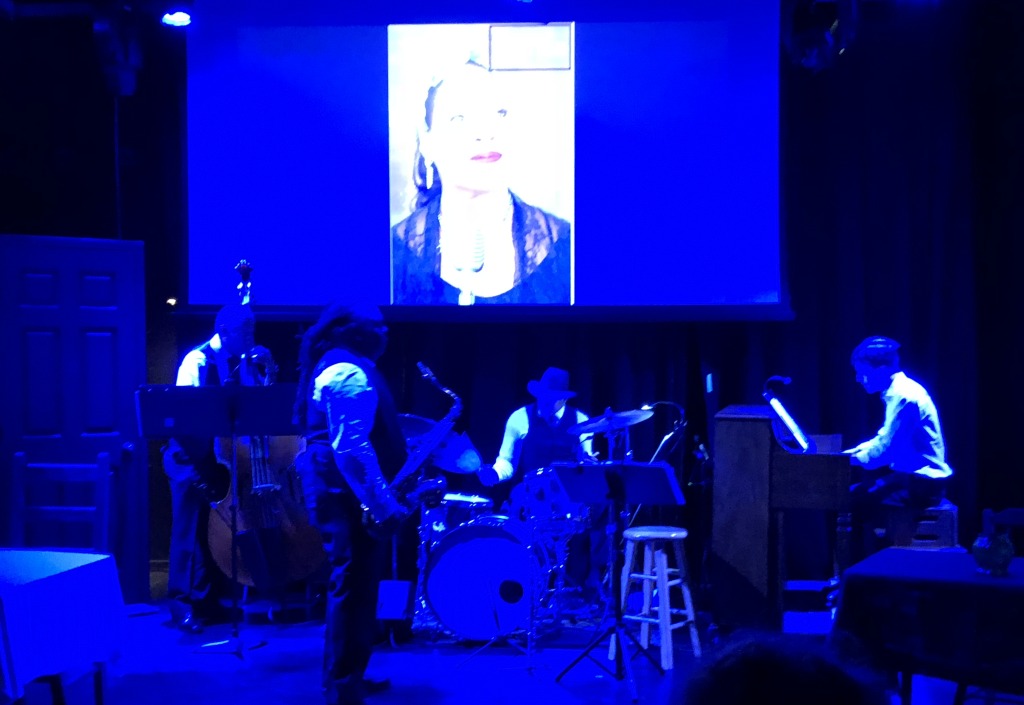 The jazz combo. Photo by Karen Salkin. (Best she could do in the dark!)

The jazz combo played a bit by themselves at the beginning of both acts, which I really loved. The entire presentation gave me the feel of being in a nightclub or cabaret.

And, of course, this is all the work of Sybil D. Jatta, who not only sings every song, (beautifully, I might add,) and plays every character, but wrote the show! Talk about multi-tasking. Covering Billie’s entire life had to be a lot of work! And she really worked-out even the smallest details. 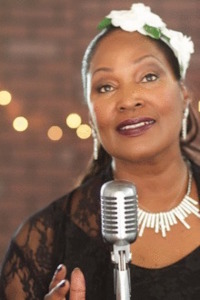 In the acting department, Sybil commits to all of it, in a non-pushing, low-key way, which I really appreciate. She’s very pretty to begin with, which is always a bonus in the biz, and she looks gorgeous when she sings, which allows her dimples to show more.

And I must commend her excellent wardrobe choices. Sybil is a woman after my own heart, with all of her subtly sparkly dresses and bling—I think I need to go shopping with her, asap!

I was wondering how the presentation was going to end, and hoping it would not be with a big death scene. Thank goodness it’s done in a classy way, with an original song entitled Legends, which is accompanied by a slide show of many deceased legends on the background screen.

I give Sybil a lot of credit for not being thrown off her vocal game by the rhythmless woman in the front row on opening night. That crazy off-the-beat bopping was torturing me! And I wasn’t the one performing jazz!!!

One nice thing that happened is that at intermission, a guy from the theater asked the audience if the temperature was good for us. I’ve never seen that happen anywhere before! Here’s a tip–if you’re a person who gets really hot, make sure you sit in the third row on the right side because the air-conditioning blows right on you there. 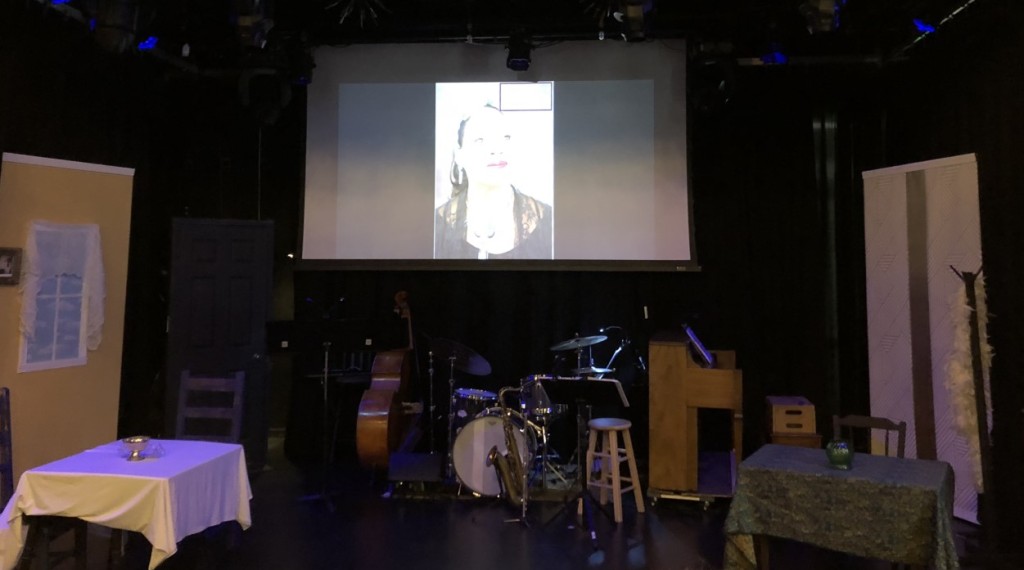 The set before the show. Photo by Karen Salkin.

Speaking of the theatre itself, I have to advise you of a weird policy they have, (which has nothing to do with the actual show, but you should be aware.) As you enter, they make you sign something on an iPad, and then try to take your picture! So my advice is, just sign the disclaimer, (I think it’s about not copying their art,) but decline to give your email, phone number, etc. Or just give fake ones. And when the device tries to take your pic, just put your hands over your face. I can’t imagine that this is legal, so no worries. Billie Holiday: Front and Center is worth the little bit of hassle at the beginning.