Trending
You are at:Home»MUSIC»THEATRE/MUSIC: ALWAYS…PATSY CLINE
By Karen Salkin on August 7, 2015 · MUSIC, THEATRE 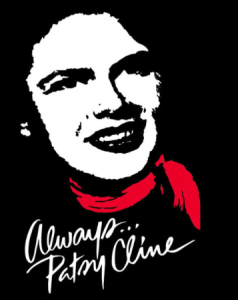 If you see only one show in Los Angeles this summer, I’m suggesting it be, no–insisting it be–this one!  No matter your taste in theatre, or music, you’ll be thrilled you saw Always…Patsy Cline.  It’s a super fun-filled evening, and the music can’t be beat.  If this production of it at the Sierra Madre Playhouse doesn’t win every theatre award that this city has to offer, it would be a travesty.

But, you know I have to go in order, so here are the scoops. 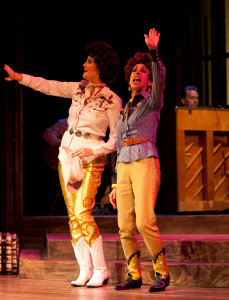 Always…Patsy Cline is a story so poignant that I just knew it had to be true!  It’s actually a semi-famous show by Ted Swindley, which I had erroneously thought was about Patsy’s short life.  Turns-out, it’s based on a real experience Pasty had with a super-fan, from that fan’s perspective.  It’s basically a monolog by the fan, (Nikki D’Amico,) with singing throughout by Cori Cable Kidder as Patsy. They do interact occasionally, but the fan character seems to be doing 95% of the dialog.  It’s very cleverly done; I’ve actually never seen anything like it.

There are also five on-stage musicians, portraying Patsy’s band.  And they really do look like they’ve just come straight from the Grand Ole Opry!  (Surprisingly, it turns out that the music director, Sean Paxton, booked the other four men just three days before the opening!  You could not tell that at all!) 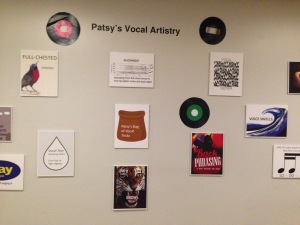 Part of the lobby display. Photo by Karen Salkin.

I know this is a show that’s been produced many times since it’s original off-Broadway run, but I can’t imagine that it’s ever been done better. This smaller L.A. theatre hit the jackpot when they found these two performers!!!  It’s a very well-written show to begin with, and the Sierra Madre Playhouse has an especially good production of it, directed by Robert Marra.

For those of you LA hipsters who think that you’re not a fan of country music, just put that out of your head.  Patsy’s music is iconic, and Cori sings it all beautifully.  I’ve rarely heard Patsy’s records, but from the little I have, it seems like Cori’s renditions are spot-on.  When I decided to go see this “play with music,” (as I dubbed it, as opposed to being an outright musical,) I actually had forgotten that I’m not into the older country music.  (I am now, sort-of, due to acts like Brad Paisley, Carrie Underwood, and Keith Urban.)  But I’m so glad I saw this show.  It was truly a delight. (Did I just turn into my mother for that last sentence?!) 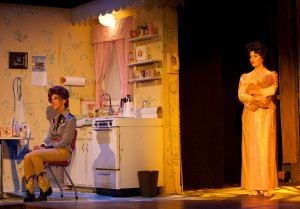 Nikki D’Amico and Cori Cable Kidder on just one third of the great set. Photo by Gina Long.

Nikki D’Amico put me at ease right away.  What a free performance she gave!  The show begins with “Patsy” just singing with her band, and I was a bit worried that I wouldn’t be into hearing just that for an hour.  But, the second Nikki bounded on-stage, (playing the fan,) the energy picked right up, and never wavered after that.  She gives one of the most secure, full-of-life performances I’ve ever seen!  It includes much physical comedy, and even singing and dancing a bit, along with the verbal humor. On opening night, she had the entire audience in the palm of her hand from the get-go. (And her pathos at the end gave me chills.  And tears.) 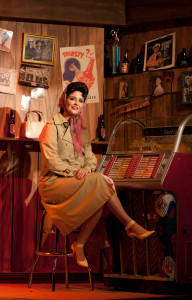 Cori Cable Kidder as Patsy Cline, sitting in yet another area of the fabulous set. Photo by Gina Long.

Nikki should next do a one-woman show of Carol Burnett!!!  (You’ll agree with me the second you see her.)  This girl is a revelation, and she deserves to win the Ovation Award, the L.A. Drama Critics Circle Award, and the new-ish Stage Raw Award. And any other ones that are out there.  This performance is that special!

And Kidder’s Patsy is the perfect partner for Nikki and her comedic antics.  She doesn’t have much of an acting part to do, but her singing is excellent.

Even the band members do their little bits of shtick with flare.  And the set, by John Vertrees, is perfect.  It’s well-appointed and completely utilitarian.  Actually, everyone connected with the show should be applauded.  (My only one ever-so-slight criticism is that Nikki’s bracelets were making a bit of distracting noise when I saw it.  So, she should wear just one.  But that’s it.) 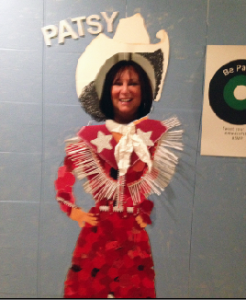 There’s a fun, appropriate exhibit in the lobby, which includes this “Patsy” cut-out. Doesn’t INAM’s Karen Salkin look happy to stick her head out of it? Photo by Alice Farinas.

And now a word about the Sierra Madre Playhouse itself: It felt just like Summer Stock to me!  I love that feeling!  (Well, outside of how sizzling the temp in the lobby is.  But it’s a zillion times better in the actual theatre.)  Even walking outside at intermission brought back wonderful memories of seeing shows in Bucks County in the summer with my family.  And it’s not even a really small theatre; it’s just the right size. The stage can be seen easily from every seat. (It looks like it was a movie theatre in a previous life.) Sierra Madre is a beautiful little community, one that I had never been to before, but plan to visit again soon.

To add to the charm of the evening, we were treated to a lovely opening night party with the cast and crew, complete with laudatory speeches, which I loved.  Most fetes of that ilk have just schmoozing, with no back stories. Everything that Artistic Director Christian Lebano had to say about the show was interesting. 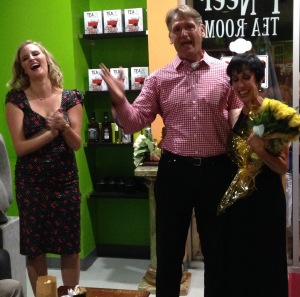 The celebration was held across the street and up the road a piece at adorable tea room, T-Neer.  We loved it so much that I hope to go back and review it some day soon.  (The party food was made by other friends of the theatre, and the tea room was kind enough to let them use their venue for the soiree, which was great because it has couches, and even tables outside for the hotter guests, such as I!)  I’m always on the look-out for places that serve afternoon tea, so I’m considering this one a find!  Maybe I’ll even drop-by before the next opening night.  Or when I go back to see this wonderful show a second time!