CIRCUS 1903, THE GOLDEN AGE OF CIRCUS

Please do not miss this show that’s running for just a few more days and nights at the Pantages Theatre in Hollywood! Seeing it will be the most fun you’ve had in awhile. 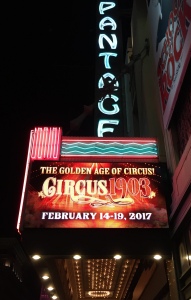 I’m sure that many of you know this by now, (even though I’m also sure that some of you don’t believe it,) but, when I was twenty, I ran away and joined the circus. For reals!!! (That’s when my mother’s hair turned white. No lie.) So, I’ve been attached to all things in that genre ever since. (Just last month, I wrote about how sad I am over the recent demise of the Ringling Bros. version, which you can read here: itsnotaboutme.tv/news/karens-rantlive-production-ringling-bros-and-barnum-bailey-circus-closing.)

So, when I saw that Circus 1903, The Golden Age of Circus was coming to the Pantages, I knew that I could not miss it. And neither should you! (But hurry—it’s in town this week-end only!) 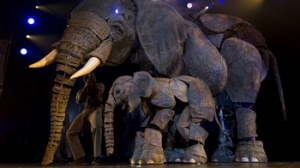 And it’s even better than I expected. Actually, I didn’t know what to expect; since it wasn’t being billed as just a “circus,” and it is in a theatre, as opposed to an arena, I thought that perhaps it’s a play about a circus. But no—it’s a full-blown circus, with unbelievably incredible acts, a hilarious “Ringmaster,” and even elephants—but not real ones. (Yeah—I’d like to see real pachyderms on the stage of the Pantages. That would be a sight, wouldn’t it?)

Circus 1903, The Golden Age of Circus is delightful and charming, and, on opening night, the two+ hours just flew by! From the start, the “Ringmaster,” David Williamson, was perfect. He’s obviously a talented comic magician, who works well with children. Mr. X said that David is “great,” and “brings a powerful element of fun” to the show. (I guess he should start writing these reviews instead of me, right?)

There’s no story to this show; it’s just straight-out circus acts, but with old-timey costumes and set pieces. Those throwbacks are really interesting to see, but I still don’t understand why it’s set in 1903; these acts are timeless. It could be set in the future and would make no difference; the date neither adds nor detracts from the enjoyment of the show. Maybe it’s just to have a different point of reference. And it gives the Ringmaster some funny lines about the date, so what the heck.

Every single feat of acrobatics is an astonishing one; there are no “so-so”s. After each act had performed, I thought that had to be the highlight because I could not imagine what could equal or top it. But each and every one came through, big-time. The juggler, Francois Borie, was phenomenal; the aerialist, Elena Gatilova, was stunning; the Rola Bola guy, Mikhail Sozonow, was dazzling; and the contortionist, Senayet Asefa Amare, was mind-blowing. Each act was straightforward and thrilling, the way a true circus is supposed to be, in my opinion. Even though we wound-up holding our breath in fear all night, Mr. X and I loved it all! The entire evening was like going on the highest rollercoaster, with no danger to ourselves!

I know, I know—we can all now see acts like this on America’s Got Talent and YouTube. But seeing them live is a whole different ballgame. Please trust me on this. They are all absolutely breath-taking in person, and the energy of the crowd makes the whole show even more sensational. (Speaking of AGT, most of these acts could win that show!)

But, surprisingly, my favorite part of the whole proceedings are the “elephants.” They are actually amazing “puppets,” with people on stilts being parts of the big one. They’re actually what attracted me to this show in the first place! When I saw pictures of them somewhere a few months ago, I knew I had to witness it all in person. And they did not disappoint—they are charming and fascinating. And, the best part is, no one can protest on their behalf!

Mr. X mentioned that the whole show is “tight and “very well-done.” He was also impressed that the “lush, theatre-filling music” was “perfectly-timed” to each act. It really has to be spot-on, or it could mess-up the timing of these daredevils. Actually, on opening night, one of the acts did have a little mishap, (which is Mr. X’s worst nightmare about circuses,) and the music immediately cut-off. And it began exactly on time when the duo began the trick again, (to great success, I must add.) Very impressive on the part of whoever is in charge of it. (I’m assuming it’s pre-taped rather than live musicians.)

And I was impressed that every act, even the ones the Ringmaster did with tiny children from the audience, played to the back of the room. (And I should know—I was sitting way back there this time.)

That brings me to three more important points about Circus 1903, The Golden Age of Circus: Firstly, it’s a great show for all ages, which doesn’t occur too often in this town anymore. What a magnificent memory this will make for kids! Secondly, this is the perfect entertainment for Valentine’s Week; you have to hold hands the whole time, because of being concerned for the danger acts. And the whole show is a lovefest! And thirdly, the opening night audience was one of the most appreciative crowds I’ve ever seen! And, trust me, it was made-up of quite the cross-section of mankind. That energy was truly an experience to be a part of, so I hope that the one you’ll be in will be as responsive. I have a feeling it will, because this show just brings the joy out in you.

I had one funny revelation near the end—it finally dawned on me that many circus acts move their arms wildly to inspire more applause while they’re doing the most dangerous stunts. But I need everyone in the house to be quiet while I just brush my teeth! So how can they perform to all that noise and clapping?! It’s a mystery to me.

And lastly, please make note of your curtain time, and do not be late! You do not want to miss even one second of this fabulous fun!!!