Trending
You are at:Home»EVENTS»THEATRE/EVENT/UPCOMING: THE WALLIS’ EVENT TO ANNOUNCE THEIR UPCOMING NINTH SEASON SCHEDULE (WITH A CELEBRITY GUEST STAR!)
By Karen Salkin on June 3, 2022 · EVENTS, THEATRE, UPCOMING

THE WALLIS’ EVENT TO ANNOUNCE THEIR UPCOMING NINTH SEASON SCHEDULE (WITH A CELEBRITY GUEST STAR!)

I had a marvelous time at a special event at The Wallis in Beverly Hills this week. They announced next season’s performance schedule with a lovely and informative private gathering.

Before I get into the particulars, I have to laud The Wallis, in general, for a couple of things: The first is, that as of now, they still require proof of vaccination and masks, a policy that allows all the guests peace of mind. And, as every Los Angeles theatre-goer knows, their seats are sooo much better than those of any other theatre in town! 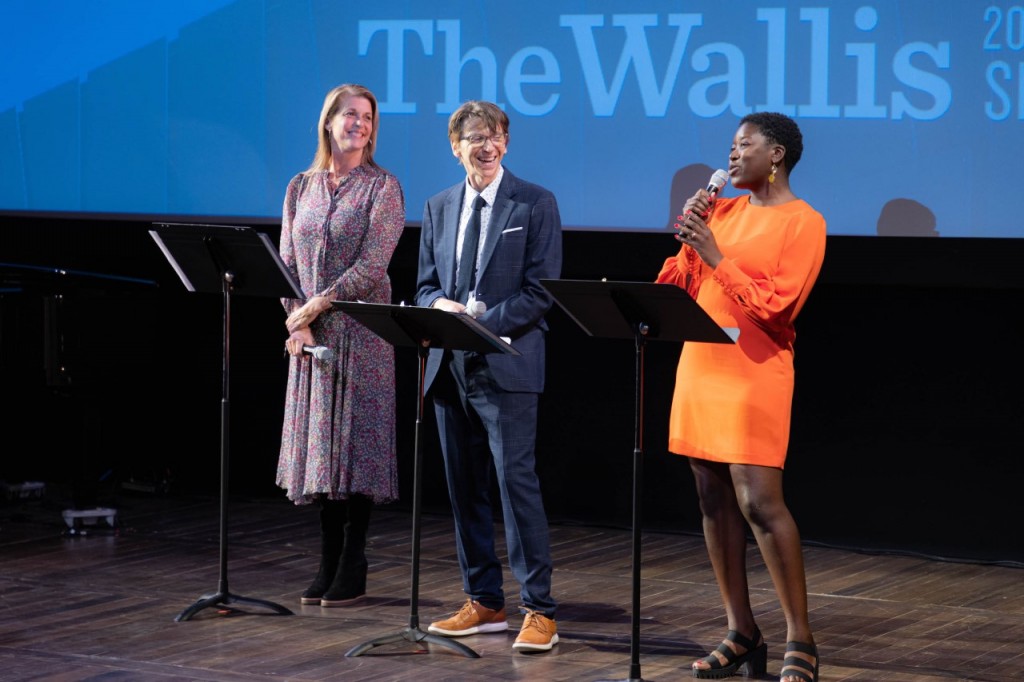 The Wallis’ Executive Director and CEO Rachel Fine; Associate Artistic Director Coy Middlebrook; and Program Manager Camille Jenkins.
Photo by DVR Productions, as is the one at the top of this page.

I highly suggest that you check it out for yourselves, (the link is at the bottom of this article,) because there are too many shows for me to tell you about in this space. But I’ll give you some of the highlights now. 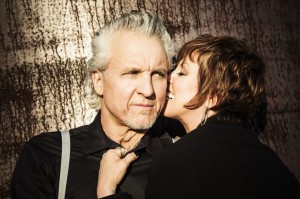 After hearing of the September and October offerings, we were treated to a surprise performance by none other than…Pat Benatar! She and her fabulous multi-hyphenate musician husband, Neil Giraldo, (who were inducted together into the Rock and Roll Hall of Fame this year,) played a song they composed for Invincible, an upcoming World Premiere musical at The Wallis. It’s a Romeo-and-Juliet-type love story that features all songs by the duo. Accompanying them on piano that night was Kimo Cornwell, of the Grammy-nominated jazz group Hiroshima. We were privileged to experience that music in such an intimate setting. The musical, written by Bradley Bredeweg, (who introduced them that night,) will run at the theatre from late November through the holidays.

And here’s a fun coincidence that I have since learned of–not only are Pat and I both from Brooklyn, but we’re also fellow Capricorns! Now I really can’t wait to see them again on their opening night in November!!! (More about them all in a minute.)

At the beginning of 2023, The Wallis will present a version of Wuthering Heights. (I beg of everyone–please notice the spelling and stop calling it “WEAtheirng Heights!!!” Were all of you absent from English class that day???) Based on the director’s previous endeavors, (she turned the very dramatic Brief Encounter into a comedy, which the audiences seemed to appreciate,) I have a feeling that, while still being very entertaining, it will differ greatly from the iconic film rendition of one of my favorite tales of all time, so I have to think this one over. I don’t know if I can bear to hear anyone other than Merle Oberon (and my own spot-on imitation,) utter the classic line, “But Ellen, I am Heathcliff!” (I got chills just writing that!!!) 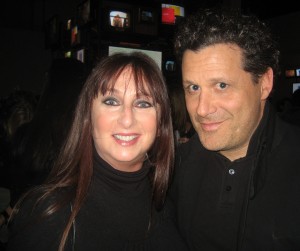 Then, in March, there will be what I know will be one fun evening with uber-famous fashion designer, Isaac Mizrahi. I met him in New York about a dozen years ago, and he could not have been more darling! It was at a big event of his own, and when a photographer asked if she could take a picture of us, not only did he accept at once, but he even checked-out her camera first to make sure it was on the correct setting! How lovely and patient of him. So now I hope I get to see, and hear, him at the Wallis next year. (But I’ll have to diet until then so that he can recognize my previously skinny self!)

Sheldon Epps on the right, with Richard Sherman, (who I coincidentally mention in a minute,) on the left, at a previous event. Photo by Earl Gibson.

About a year from now, there will be the West Coast Premiere of My Lord, What a Night, directed by one of my favorite men in LA, Sheldon Epps. It’s a new drama touching on social injustices, based on the real-life friendship between opera singer Marian Anderson and physicist Albert Einstein. Who knew those two even knew each other?! So, despite the weak title, I’m already interested. (They had me at “Sheldon Epps.”)

In addition to those specific events, I look forward to all the dance shows The Wallis offers, including Body Traffic, whose company members performed a snippet of one of the numbers we’ll see next year, to music from James Brown, entitled Snap. I know that The Wallis peeps were trying to make the whole presentation not be too long, but that dance could have gone on for a lot longer, as far as we observers were concerned! Talk about whetting our appetites!

There will also be a lot of live music concerts, which I’m sure will all be superb. Weirdly, I never go to just-music concerts; although I absolutely love the wonderful sound of live music, I always need a visual, such as dance, to go along with it. When I used to go to symphony concerts at Lincoln Center with my mother and sister as a teenager, I had to actually go into the lobby while the concert was on, to look at myself dancing in the mirrors, just so that I had something to look at. (I wish I were kidding.)

But The Wallis’ An Evening With Motown should be a good one. I once spent a few evenings with Motown, actually, when I naively opened for the Temptations and Four Tops. Let’s put it this way–the guys loved me, (and I them,) the audience not so much. But what an incredible experience for me! And I have much higher hopes for this one-night-only show at the Wallis. 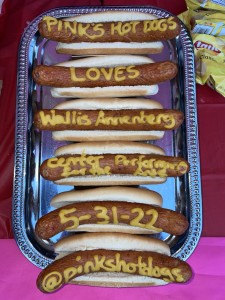 The hot dogs, of course! Photo by Karen Salkin.

While the schedule-unveiling was all interesting and entertaining, the reception afterwards was the highlight of the evening for my friend and me.*  And that’s because, as we were feasting on our Pink’s hot dogs, (which came in beef, turkey, or vegan,) who should come over to join our table but first Kimo Cornwell, then Bradley Bredeweg, then Neil Giraldo, and then My New Best Friend, Pat Benatar!!!  How lucky were we?!  That group was fun, intelligent, witty, and we all had a great time together. *[Note: That last part–“my friend and me,” is the correct syntax. More and more people are saying, “Me and my friend,” and I keep wondering why so many have never learned to speak correctly! It’s also “me” not “I” because you see which word would be correct if you took out “my friend.” Maybe I should just go back to teaching.]

Pat and Neil are a wonderful duo, both professionally and personally. She’s adorable, and as gaga over her husband of forty-three years as I am over Mr. X! I rarely see couples like that. The only other one I can think of that I know personally is Elizabeth and Richard Sherman, he of the world-famous Sherman Brothers, who composed all of the great Disney classics, such as the Mary Poppins songs and It’s a Small World. (I know—I hate him for the latter ditty, too!) They’ve been married a gazillion years now, but they always seem like they’re in the giddy throws of early dating! Elizabeth, Pat, and I are all like Peanuts’ Sally Brown, who looks at Linus with hearts in her eyes and declares, “Isn’t he the cutest thing?” I adore couples who love each other! (Well, after all these years, we’re still not quite sure how Mr. X feels about me, but a girl can hope, can’t she?) 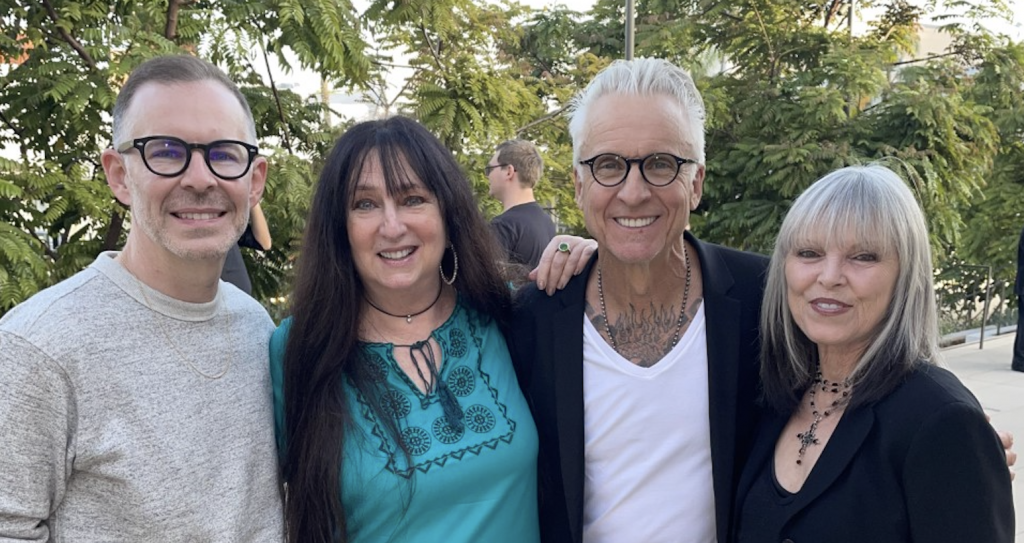 Okay, I’ve digressed. (Have you met me?) But those are the kind of fun thoughts that the Wallis event elicited in me. I always have a good time there.

And even this sort-of business event was a total winner. Now I look forward to seeing so many of The Wallis’ presentations. Especially from those wonderfully luxurious and comfortable seats!

To learn more about next season’s fun at The Wallis, just click here: www.thewallis.org.