Trending
You are at:Home»THEATRE»THEATRE: WAR STORIES
By Karen Salkin on February 9, 2017 · THEATRE

This play is at a sweet little theatre in the Valley that’s new to me. I love being introduced to places like this! It’s very cute and comfortable, with cheery personnel. (If you can’t climb steep stairs, though, make sure you don’t have to use the restroom when you go to Actors Workout Studio.) 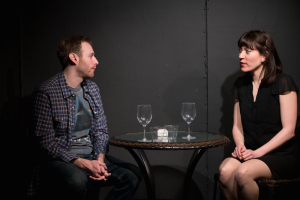 War Stories itself, though, is not as fun as the theatre, I’m afraid. The story is interesting, and has some clever lines, but the play would be half as long if the quartet of actors didn’t pause…at…every…single…period. It was driving me nuts on opening night! I don’t know if that’s the fault of the actors themselves or the director. Or, as I suspect, a combo. But it is the worst kind of acting. You’re supposed to learn that in Acting 101! (Clearly, this group was absent that day.) I just wanted to run on stage and shake them, and ask them if they’ve ever heard people talk in real life!!! (By the middle of the second act, I was wishing that I could give them all the pill that Dick Van Dyke’s character gives the ballet conductor on the Ed Sullivan Show, at the end of Bye Bye Birdie, so they would just speed it up already!) 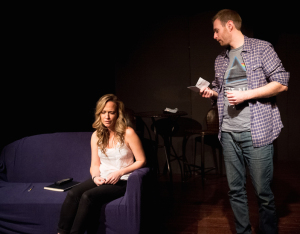 The delivery of all four of the participants was like bad audition monologues. Ones where the actor does not get the part! The beginning of War Stories is actually monologues from each character, and it’s a technique they use throughout, to differing degrees of success. But they all have very uncomfortable physicalities, which are very distracting.

When I saw the play, Roxanne Jackal, as the “pretty girl,” (which she is,) kept doing that horrible thing of slapping her thighs every few sentences. Have you ever seen anyone do that off-stage?! Ever?! I think not.

And Sarah Kelly (who also wrote the show, so she should know better!,) seemed to be trying hard to keep herself from not making that same mistake, by constantly holding her hands in front of her solar plexus and “Eensy Weensy Spider”-ing them. That was maddening to watch. Samuel Martin Lewis didn’t do either of those physical annoyances, thank goodness, but he just delivered every single line in a low-key manner. 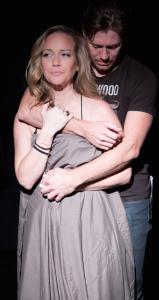 At least Alexander Carroll tried to bring some life to his “bad boy” character. He was by far the best one on stage here. (This was weird, though—he was the only one with a costume change! The other three all stayed in their one outfit the whole time—except for a blanket and an apron–even though it takes place over an unidentified, and hard to figure out, period of time. But “Jake” went from a leather jacket to a tee shirt to a long-sleeved polo shirt, all black, of course, to show us that he’s a bad boy. The multiple tops prompted my friend Alice to say that his performance had “many layers.” Funny comment.)

By the way, these are far from the worst performances I’ve ever seen; it’s just that their bad acting habits are so egregious that it’s hard to concentrate on what they’re saying. They need to clean-up those faulty techniques right away. (And Roxanne needs to work on her lisp, too. I know that people ignore the ones that Drew Barrymore and Emma Stone have, but lisps are like nails on a chalkboard to me, especially in actors, who work on every other part of their craft. And lisps are so easy to fix!!! My Speech Chairman father had plenty of private clients when I was growing up, and he fixed them in a matter of just a few sessions. I know casting people who won’t cast anyone with a lisp; they’ve told me that they feel that actors who have one are lazy.) 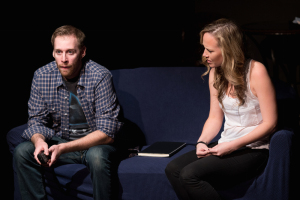 All that being said, the show is entertaining enough. And the price of admission is inexpensive enough; it’s just about the same price as a movie nowadays! And there’s something about live theatre that feels so much more like an evening out than going to a movie. And Actors Workout Studio is right in the middle of the NoHo Arts District, so you can go for a bite before or after the show. Or both! It’s a great area for a date.

And hopefully, by the time you see the show, the actors will have taken all this to heart, and started correcting themselves. (That’s why I write this to being with; I give this constructive criticism because every weakness can be fixed by them.) And if not, at least you all get to see what I’m talking about! And, I’m told by many of my readers, that’s why they take me up on my theatre/dining/movie/music/art suggestions to begin with! It’s considered half the fun.