Trending
You are at:Home»THEATRE»THEATRE: VINO VERITAS
By Karen Salkin on October 4, 2017 · THEATRE

Since, in one word, this new play at Theatre 40 in Beverly Hills is about honesty, I have to be brutally honest here, as well. (If you’re part of the production, and don’t love everything I have to say, just make believe that I, too, took the truth serum that’s at the center of the scenario.)

Vino Veritas, by David MacGregor, has an interesting enough premise, but it never comes to fruition. It just sort of falls flat and then lays there. 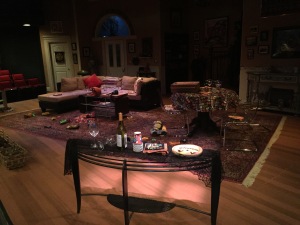 But there are a few good aspects of the show, so I’ll begin with the positives. All the action takes place on Halloween, a day I absolutely love! So the timing of the production is perfect. Just walking into the actual theatre and feasting my eyes on the fabulous set gave me a warm feeling.

So let’s talk about that great set. It’s quite possibly the best one that designer Jeff G. Rack ever conceived! He is one creative dude!  If this had been one of those walk-though Halloween events, and I just got to spend an hour admiring all the appointments up-close and personal, I would have been happy. (Actually, happier than I was sitting through the long, tedious play!) As I stated before, I love everything Halloween, so all the set decorations are spot-on, in my book. Except for the flashing lights on one of the goblin figures as the play begins. But, if you, too, eschew flashing lights, stay calm because they stop soon enough. 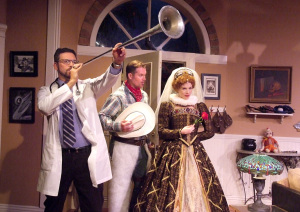 Also on the positive side, the casting is very good in the case of three of the actors. (I’ll elaborate on them in a sec.)

Getting back to the show itself, it does have some entertaining moments, but the problems are plentiful. There are so many holes in the writing that they became hard to overlook. Most of them are little, but they add-up. Quickly.  And they begin right off the bat. First of all, as much as I adore the set, some of it does not make sense. The play opens with a major mess in the family’s living room, I think to indicate that there had just been a big pizza party there, but the action takes place before the gathering we’re witnessing as the narrative goes on. There are tons of pizza boxes, which could indicate that they are from an earlier party for the couple’s kids, but if that’s the case, why are there several used wine glasses? That needs some explaining in the script. I think I know what they’re going for, but it’s just confusing.

That all led to a weak portrayal of time. If their kids had had a party, it would have had to be after school. (Unless this is one of the very few years that Halloween falls on a Saturday. But, since that’s not stated in the text, it’s probably not.) So, after 3PM, the couple had a party, it was over, they took time to take the kids elsewhere for the night, then make food for a little foursome reception before the neighborhood fete at night. Soirees like that begin no later than 7PM, so they had just four hours to do everything I just listed, get dressed in costumes (from clean-up attire they wear earlier in the act,) and then host friends for an evening of craziness, all before they plan to leave for the costume contest. I think not. 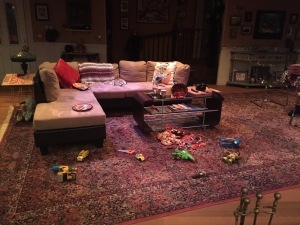 See all that Halloween candy spilling onto the floor in the center? Photo by Karen Salkin.

The timing issues aside, these are people who live in residential Studio City, in an obvious house, (as opposed to apartments,) and on Halloween, they don’t have even one trick-or-treater? Again I cry foul. That’s just not plausible. And they aren’t even prepared for them!!! There had been an overturned basket of candy on the floor earlier, but they put it away! On Halloween!!! That’s just crazy. If one chooses to set one’s play on a specific day or night such as this one, he has to account for the activities that are inherent in the set-up. That’s Playwriting 101!

Once something peeves me, the annoyances begin piling up, even the petty ones. So, it also bothered me that the plastic containers the couple put their kids’ toys into look way too new. I just think that since they seem to be doing a task they do every day, the bins would have been used. [Note: But I am jealous of them—I look for that size container all the time, with no luck. So, if any of you reading this know where to get mid-sized ones, please let me know in the comments below.] 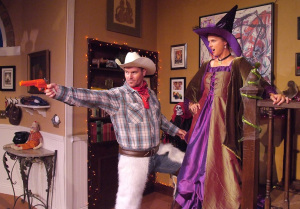 Okay, here’s my last little complaint—both husband and wife are pro photographers, but they’re shown sharing a good camera. I know tons of professional photographers and I swear—no one is allowed to even touch their cameras but themselves! They would never share a camera, even with a loved one.

That’s it for the silly holes. Now on to the serious issues with Vino Veritas. The writing, directing, and the acting are all pretty tedious, so I don’t really know where the fault for the slowness of the piece lies. This is far from an awful show, and it does have a few laughs. But it’s not the comedy it’s meant to be.

The script is way too long and wordy, and the action is way too slow. The pace really needs to pick-up. Once you get people laughing, you need to keep it going. And leave them wanting more, not make them wish the show would be over already. One laugh every ten minutes or so does not a comedy make.

The first act ends with a very interesting new wrinkle, which makes the audience look forward to the second act. But it’s explained away in about a nano-second when Act II begins, and that’s that. Then back to the tedium. 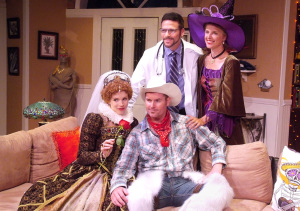 As far as the acting goes, Daniel Kaemon plays his role very well, Shawn Savage is good and marketable with an excellent voice, (I think he would fit in well on a television series,) and Kirsten Kollender steals the show. I hate saying this, but the only one of the foursome who doesn’t fit with the rest of the good actors is Christine Joelle. Her acting is pretty weak. (I actually wrote that note near the beginning of the show, hoping to cross it out later, but she never got better, in the least.)

All that being said, all of them are guilty of the most egregious mistake in acting—putting a period at the end of every…single…sentence they utter! Nobody talks like that!!! I really do blame the director, Michael Karm, for that as much as the actors. Vino Veritas would have been twenty minutes shorter with the same script had they delivered their lines better.

As much as I was wishing that the play would be over already, or at least be more entertaining on any level along the way, I was grateful that there was so much to look at on the wonderful set that I wasn’t as bored as I would have been otherwise.

Hopefully, by the time you see the show, they’ll have fixed at least a few of these issues. (If the powers-that-be weren’t already working on improving those aspects, they just may do so after they read this review!)

But I always feel that any visit to Theatre 40 is a worthwhile one. It’s one of the absolutely easiest theatre experiences anywhere! And they always choose their productions with care and mindfulness to offer their audiences a complete variety.

Even with all my trifling complaints about Vino Veritas, I’m still recommending it. It’s the perfect play for October, and if you don’t do anything else for Halloween, you’ll feel like you already have after seeing this show.