Trending
You are at:Home»THEATRE»THEATRE: VIETGONE
By Karen Salkin on November 7, 2018 · THEATRE

With immigration being such a hot button topic these days, the East West Players production of Vietgone is most timely. 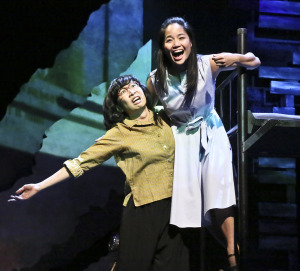 Jane Lui and Sylvia Kwan. Photo by Michael Lamont, as is the big photo at the top of this page.

It’s about the aftermath of the Vietnam War, in general, (something that I’m sure very few Americans, outside of those who were connected to it back then, have given much thought to,) and brings us the (either totally or semi) true story of a handful of that country’s citizens.

The year is 1975, and a girl and her mother have just come over to America from Vietnam, to escape the war. The story is mainly about that pair and a fellow countryman they meet in a refugee camp.

That period in our country’s history, is, shamefully for me, one that I actually know little to nothing about. Shallowly, until I went to an event a few years ago which celebrated that Tippi Hedren is the person who first opened nail salons for Vietnamese refugees, I had never really thought about it at all! (By the way, that Tippi tale is truly fascinating. You all should research it sometime.) 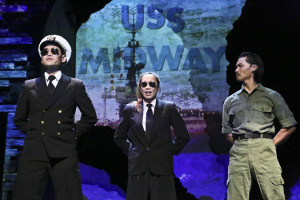 Vietgone is an interesting show. It’s a serious topic, but the play is mainly a comedy. With music–there’s a bunch of rapping!!! I really enjoyed that unexpected element; it adds a big spark to the proceedings. And even hip-hop chick moi never saw each musical break coming. It’s good rapping, by the way, even though I could actually understand every word they said! (Most rapping is just “mumble rap” to me—I listen to it for the music. And understanding the lyrics here is a good thing.)

The most is made of the midsize stage, which has to depict all different places in a short period of time. The colorful background projections, designed by Kaitlyn Pietras and Jason H. Thompson, really help bring all the locations to life. 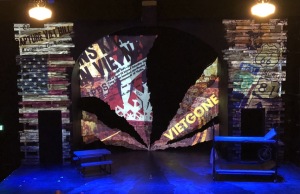 The set, with impressive projections. Photo by Karen Salkin.

The five actors, some of whom play multiple roles, are all good, but I have to admit that I had no idea what was going on for the first half hour or so. And the not only American accents on the Vietnamese characters, but almost Californian ones, to boot, really confused me. But that was all my bad–the “playwright” spoke before the play began, and I learned later that he was explaining the accents, which I totally missed because I was getting settled,* so I wasn’t paying full attention yet. I thought that he was just welcoming us. I didn’t even know this story was about his parents!!! *[Note: I wasn’t being rude to not listen—I was seated in the balcony, which took my broken back lots of time to walk up to, and then there was an issue with my seat, so all that took much longer than I had planned on before I could focus on the presentation in front of me.] But now that I just told you all of this, you’ll have a much easier time getting into the action than I did.

And, it turns-out, all of that explanation is actually part of the production, which I really did not know until just now, when I was discussing it with someone! That was not the playwright himself greeting us, but rather an actor playing him! Who knew? I guess the actor, Albert Park, is really good because I honestly thought he was just welcoming us, and not part of the scenario at all! 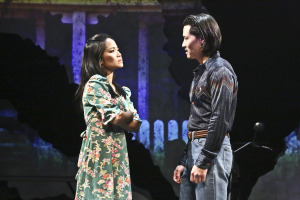 The last scene was a surprise. After witnessing the tumultuous relationship of the girl and guy for all of the preceding action, it was very interesting to see the male character become an old man, speaking to his “son,” who wrote this play.

I love that the actual playwright, Qui Nguyen, is able to envision his parents as their younger hot selves, which I think most people cannot do. He even wrote of them having tons of sex. If that were my parents, my whole play would consist of just the word, “Ewww.” (I actually just threw-up in my mouth a little, picturing it even a tiny bit!) So, on top of how entertaining and informative Vietgone is, it’s so mature of Qui to have documented his parents’ entire relationship journey! I totally take my hat off to him for that. 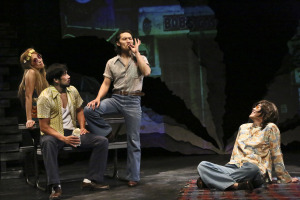 One of the best parts of seeing a show at this theatre is being reminded that the East West Players provide so many opportunities for Asian actors and other artists. They do a really impressive and appreciated job, and all of us are lucky to have them in Los Angeles, no matter our own ethnicities.

And they always make their opening nights so festive for their guests. Those evenings begin with a cocktail hour before the show, and they wrap-up with a full-on catered soiree afterwards!!! That is all so very generous of them.

The whole area around the theatre is a happening one, so when you go see Vietgone, even though you won’t be treated to an after-party, just take yourselves right around the corner and be in with the in-crowd. You may even see the hip, young cast enjoying themselves there, as well!