Trending
You are at:Home»THEATRE»THEATRE: TROUBLE IN MIND
By Karen Salkin on August 16, 2017 · THEATRE

What a wonderful production Trouble In Mind is, all the way around!

Unfortunately for me, trouble is what I always have in mind, for the past few years, anyway. But my travails are nothing compared to what the characters in this almost-perfect play at Theatricum Botanicum go through! 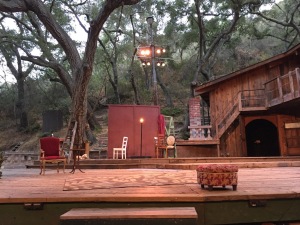 This famous outdoor theater in Topanga Canyon has five shows in repertory for the summer, and this is the second one that I’ve seen this year. (Or ever!) And let me tell you, Trouble In Mind is soooo much better than the first one I saw there, Animal Farm. It’s a totally different story, of course, but still one of oppression, of sorts, which I’m beginning to think just might be the hallmark of Theatricum Botanicum’s choices. But the production itself is far superior to the first.

It’s interesting that this is a play that takes place totally indoors, but we still see it outside. Because Animal Farm was my first experience at this venue, I had assumed that the company always chooses plays that take place outdoors, to make extra use of the fascinating environment. But it appears that—wonder of all wonders–I was wrong! 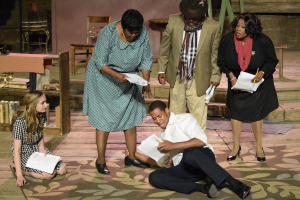 Trouble In Mind takes place in a theatre during rehearsals for a Broadway play that features an almost all-black cast. It’s mainly a comedy, (and a very funny one at that,) but gets serious about race towards the end. The writing, by Alice Childress, is astonishingly modern for being over six decades old. That was pretty shocking to realize. I can’t believe this was written in 1953! It’s so of today.

The journey is delightfully entertaining. But I have to admit that the writing falls apart somewhat in the second act due to the author having tried to make the commentary have a bit more social relevance. I hate ever telling you anything about a story, but I must discuss it here for a second, so that you’ll understand about what I speak. The only thing wrong with the entire scenario is that the older female star of the play they’re rehearsing winds-up having a major problem with the script, and blows-up at the director over it. But that part doesn’t ring true because the male character is only directing the play; he’s not the writer nor producer. So a fight to change the script would have been shot down immediately by him, no matter when or with which actor. He doesn’t have the power to do anything about it. He would have sent the actress with that passion about the issues with the script narrative right to the correct production personnel, to continue her cause. 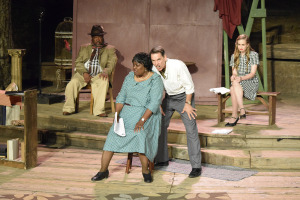 But, with or without the ending, Trouble In Mind is an incredibly witty and well-acted show. I had never even heard of this play before, (nor had the actress pal I brought along,) so I really applaud the powers-that-be at Theatricum Botanicum for not only producing it, but finding it to begin with!!!

The entire cast is excellent, with not a weak one in the bunch. Earnestine Phillips, as the actress at the center of it all, is particularly spot-on. My favorite, though, is Gerald C. Rivers. His delivery made me laugh every time. (And I give the wardrobe department big props for the clever way they hid his long dreadlocks ponytail, since I’m assuming that no actor would have rocked those in the ’50s. I doubt that even one other person who’s seen this presentation noticed them, though.) 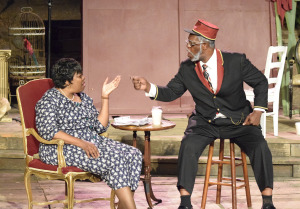 And the writing is phenomenal. There are so many memorable lines in this script.  I’ll let you discover the rest for yourselves, but here’s my favorite one, which I’ve always lived by: “A woman who will tell her age will tell anything!”  That’s exactly why you never hear any secrets from me!

What made this experience even better for me is that I saw it with a very appreciative audience. The cast even mentioned that circumstance during the curtain call, which was such a happy one. People from the crowd rushed over to meet and greet the actors, even though that situation was not an official one. I love any entertainment that makes it so you leave with a smile on your face. 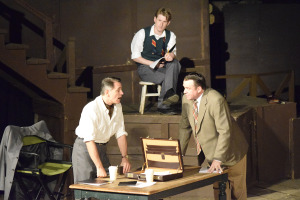 On a sidebar, there was one aspect to the narrative that I identified with. There’s only one white girl in the cast (of both the play-within-the-play, and Trouble In Mind itself,) and I’ve had that experience myself. A few years ago, I did a movie called Brothers In Arms, (do not even think of asking about it!,) which is a western featuring an almost entirely black cast. There were about three white actors, (including David Carradine, in his last film performance,) but I was the only white actress. I had really never given it much thought, either then or since, but seeing this character’s story made me hark back to that interesting bit of my own career. 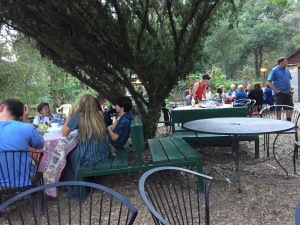 Part of the charming picnic area. Photo by Karen Salkin.

Now a bit about the atmosphere at Theatricum Botanicum. I told you last time that they encourage people to come enjoy the picnic area before the show. And this time there were even more people doing just that than the previous time. Some of them were even big groups, all with tablecloths.

And here’s an interesting thing I saw: A quartet of women packed up most of their food when it was time to go “into” the theatre, but they left the tablecloth on, and left the bag of food, a bottle of wine, and the cooler on the table. I thought of telling them they were forgetting to take it all, but, for perhaps the first time ever, I minded my own business. (Maybe the night air was getting to me.) I’m glad I did this time because at intermission, they all went right back over to their table, took it all out, and snacked some more! Try doing that in any other theatre in LA, and think if your possessions will still be waiting for you.  (Well, to be fair to the others, this is the only venue where your meal has the possibility of being eaten by animals before you get back to it.) 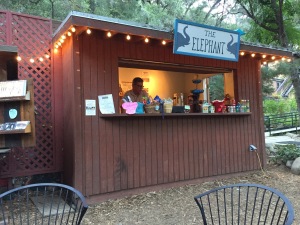 The snack bar, that makes me think I’m at a summer stock theatre in New England. I love that feeling!!! Photo by Karen Salkin.

The only three drawbacks I can see of being in this beautiful outdoor environment are the bugs, (so wear bug spray!,) birds flying through the set, (which jarred me a few times,) and the crickets’ concert being way too loud. [Note: I actually did research to find-out if those tunesmiths were crickets or the more exotic cicadas, and learned that the latter plies their trade only during the day. Mystery solved. You’re welcome.]

So grab a blanket, a snack, bug spray, and some warm clothing, (even if it’s hot during the day,) and head over to Theatricum Botanicum to see Trouble In Mind while you still have the opportunity. And, since laughter is always the best medicine, you’ll forget your own troubles for those few hours.