Trending
You are at:Home»THEATRE»THEATRE: THE WONDERFUL WINTER OF OZ PANTO
By Karen Salkin on December 19, 2018 · THEATRE

THE WONDERFUL WINTER OF OZ PANTO

Now that the Lythgoe Family Pantos have branched out beyond their original Pasadena Playhouse location to not only other cities in California, but around the whole country now, we Angelenos are lucky to still have one here every December. And we get them first! Yay, us!

This show is always one of the highlights of my holiday season. Even Mr. X won’t miss it! It’s rare for children and adults to be equally interested in a theatre piece, but that is the definition of a panto.

Actually, in case you’re not already familiar with the concept, here’s a more detailed definition of a “panto”: It’s a tradition from England, and is usually performed around the holidays. Each show is based on a well-known fairy tale, but it’s not the exact story.  It has many different elements, including singing, dancing, double entendres, a very colorful basic set, and lots of audience participation—we all love loudly booing the villain.  And if done right, as it always is with the Lythgoes, it’s tons of fun. 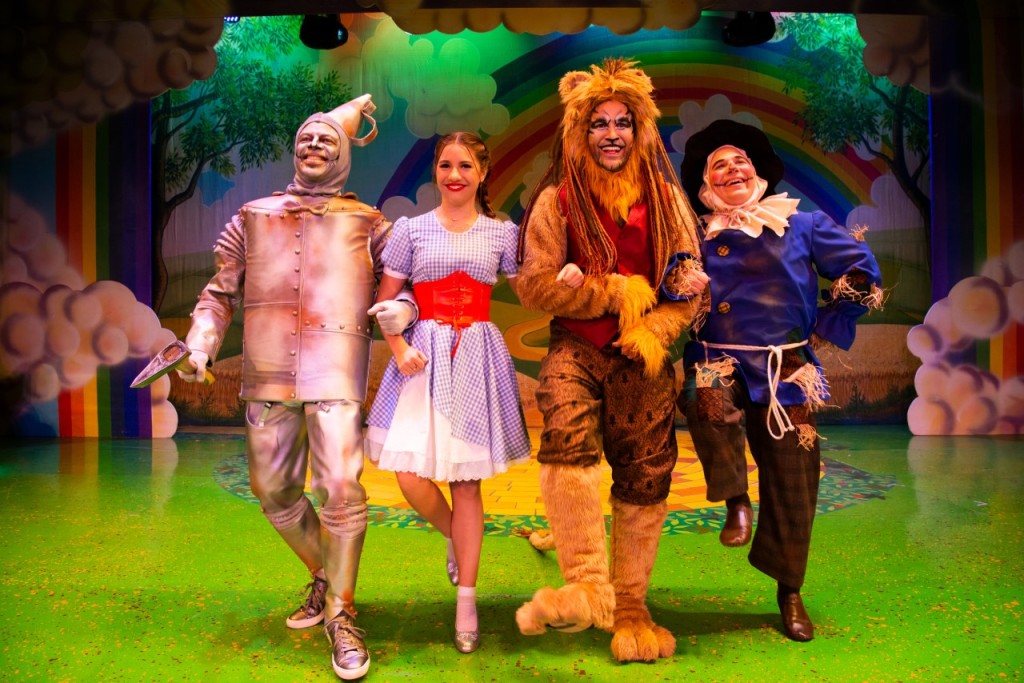 Phil LaMarr, Mackenzie Ziegler, Juan Pablo Di Pace, and Jared Gertner. Photo by Philicia Endelman, as is the one at the top of this page.

This year we were treated to their rendition of The Wizard of Oz. Yes, I know that’s not exactly a fairy tale, but it’s close enough for these purposes. And, as the re-worked title states, it’s wonderful!

As always with these pantos, The Wonderful Winter of Oz features world-class talent, such as the most working person in show business, Musical Director Michael Orland; prolific voice actor Phil LaMarr, who showed off several of those awesome character voices in this show, as Tin Woodman; and Tony Award winner Marissa Jaret Winokur, who plays a role that I assume would usually be done by a man in drag in a panto, so that they cast her instead means a lot. To see such talents, along with choreography by Emmy winner Nappytabs, is a privilege.

And as usual with the Lythgoes, there are surprises. This time one of them is that The Wizard is played by none other than…Kermit the Frog!!! I actually cried when he came on. I hadn’t even realized that I love him so much, even though my very first Christmas ornament from Mr. X is Kermit. It’s quite the coup for the Lythgoes to scoop him up (with his uber-busy puppet master, Matt Vogel,) for this show. Disney is very protective of their properties, so they must believe in these pantos as much as I do! [Note: I adore the last line of Matt’s bio in the program. It reads: “In his spare time, he’s exhausted.” I hear ya, pal—it’s taking me longer to write this review than to see the actual show!] 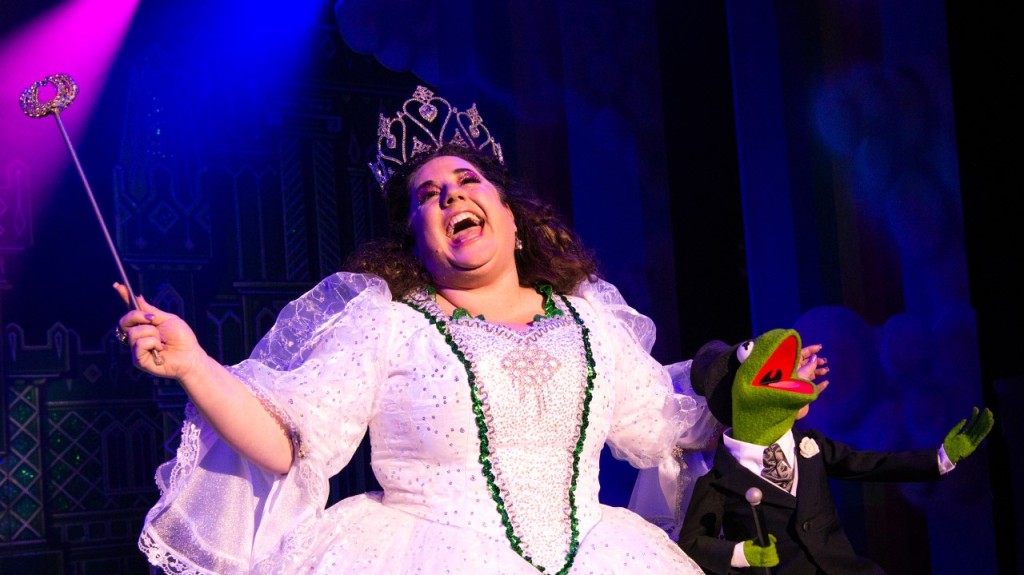 And I needed double tissues when Kermit and Marissa, (as the good witch Glinda,) broke into Rainbow Connection near the end of the show. My favorite rendition ever of that now-iconic song was Kermit’s duet with Justin Timberlake eight years ago on SNL, (except for the comic violence at the end, which I’ve blocked-out,) but this version was close.

Speaking of the cast, Mr. X pointed-out that great care is taken by this company to bring in Broadway, and Broadway-quality, performers. Everyone is good in The Wonderful Winter of Oz, but there’s a trio of stand-outs for me.

First is the absolutely adorbs Jared Gertner. What you see is what you get with him. I went-out in the pouring rain for the Press Day for this show just to see his ever-smiling face again. I love that guy. And he can sing!  I was so charmed by his total performance in last year’s Beauty and the Beast: A Christmas Rose that I didn’t listen to his singing voice per se. But I did this time, and I was wowed that someone can be that talented, on so many levels. He told me that his favorite part of the pantos is when he gets to interview a few kids from the audience near the end. And guess what? It’s mine, too! He really knows how to make that section of the show amusing for everybody. 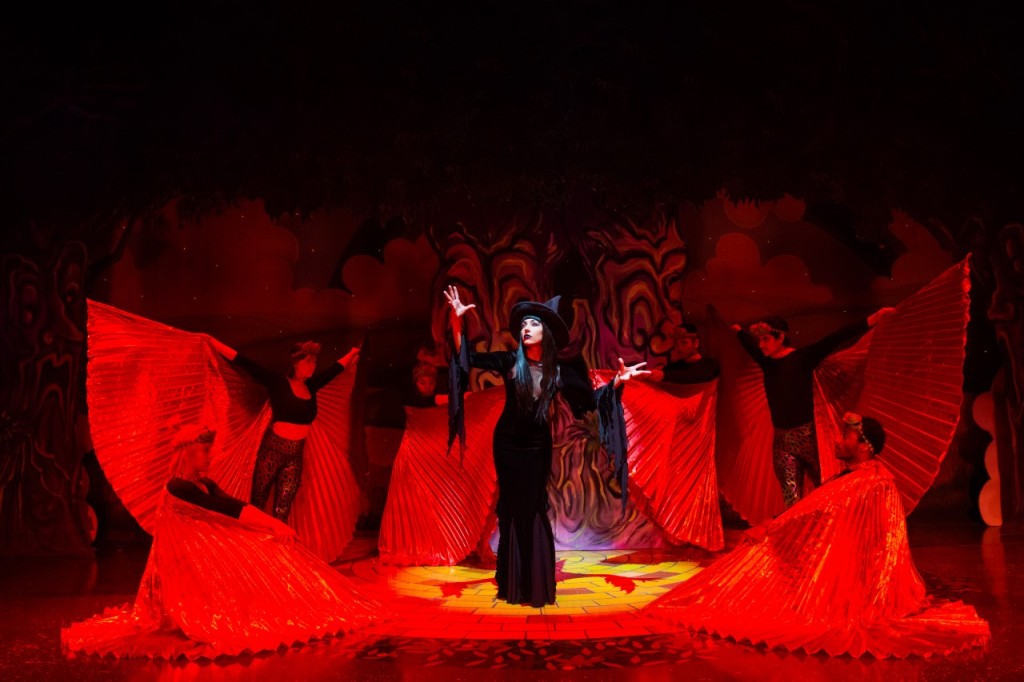 Mr. X was most impressed with Yvette-Gonzalez-Nacer, who plays the Wicked Witch. That is one talented woman. She even accompanies herself on violin at one point! Mr. X made the great observation that she gives the audience confidence. I feel bad that I didn’t have time to interview her on Press Day, but, as usual, I had eyes for only the boys. 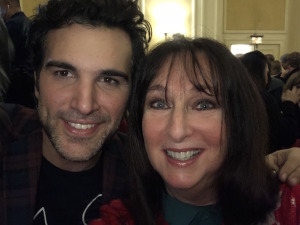 Speaking of the boys, the real revelation of The Wonderful Winter of Oz is Juan Pablo Di Pace, as the The Lion. That guy is a star.  He actually became one on this season’s Dancing With The Stars, but he’s even moreso here.  Not only can Juan Pablo dance, (which we learned on that show,) but he can also sing! Who knew?!  And he’s funny.  And, even more importantly, when I met him at the after-party, I was struck by just how present a person he is.  He really paid exact attention the entire time we were talking, which is a rarity. (Paying attention to me is not the rarity, except for Mr. X, of course. It’s that anyone is kind enough to do that at an event feting them, especially after the high of a successful opening performance!) [Note: Juan Pablo is not in the show on Dec. 29th and 30th, so plan accordingly. But I saw Philip Anthony-Rodriguez, who fills in for him on those dates, in The Fantasticks two years ago, and he’s fabulous, as well. So you’ll win either way.] 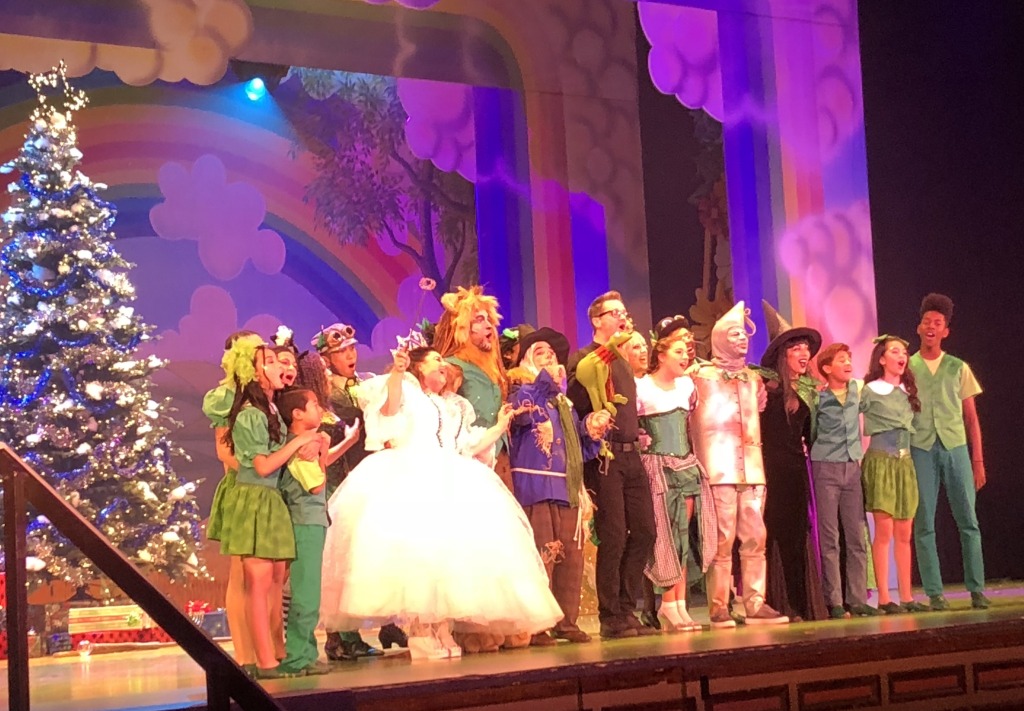 All the pantos are written by Kris Lythgoe, one of the nicest, most pleasant people I’ve ever met in show business. His writing shows that he truly loves what he does. I don’t know how he comes up with continually good panto scripts. The one for The Wonderful Winter of Oz is very clever, and as always, brings in fun local geographical references, which makes everyone in the audience extra-happy.

I love all of the panto’s corny jokes. I’m proud of myself for getting every single one of them.

I’m also a fan of the colorful scenery. And that there’s a real dog, (albeit a pretty shaggy one,) playing Toto. That’s a risky proposition, but it definitely adds to the merriment. Audiences love a real dog! But I enjoyed the crow puppets just as much. 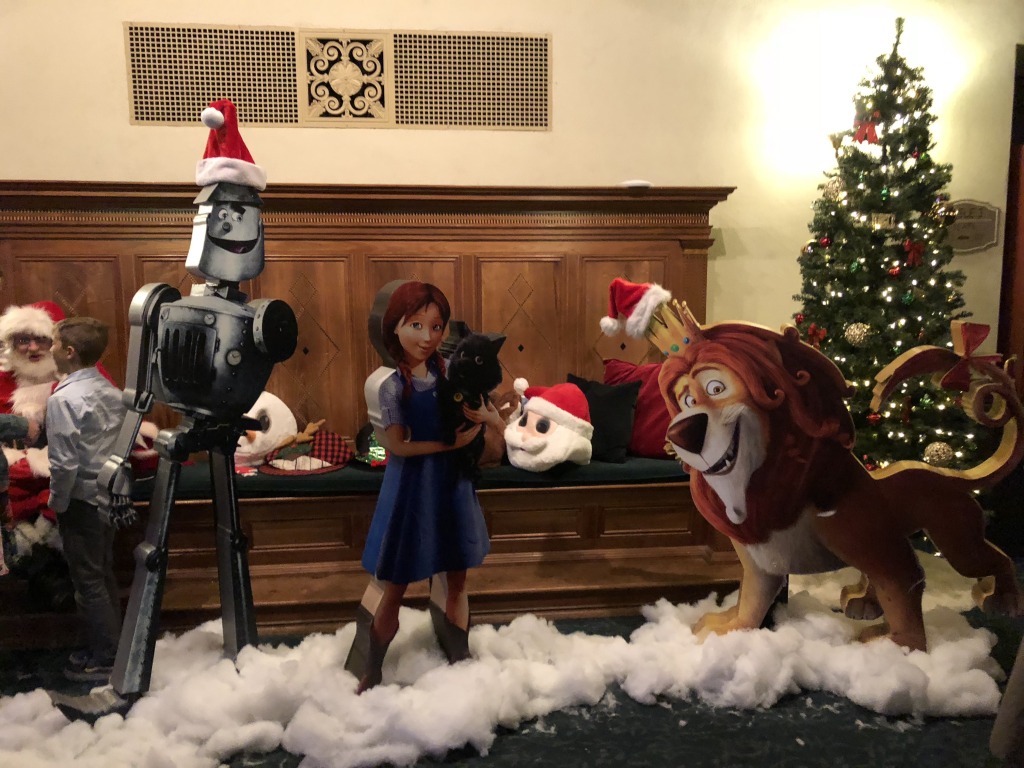 Part of the lobby Winter Wonderland. Photo by Karen Salkin.

There’s even a pre-show organ concert, followed by them giving a local girl a shot at singing a holiday song in front of a big crowd, so The Wonderful Winter of Oz is the perfect all-around holiday entertainment. And on select days, there’s a Winter Wonderland in the lobby with Santa, many beautiful decorations, face-painting, and other activities. (Check their website below for all that info.) 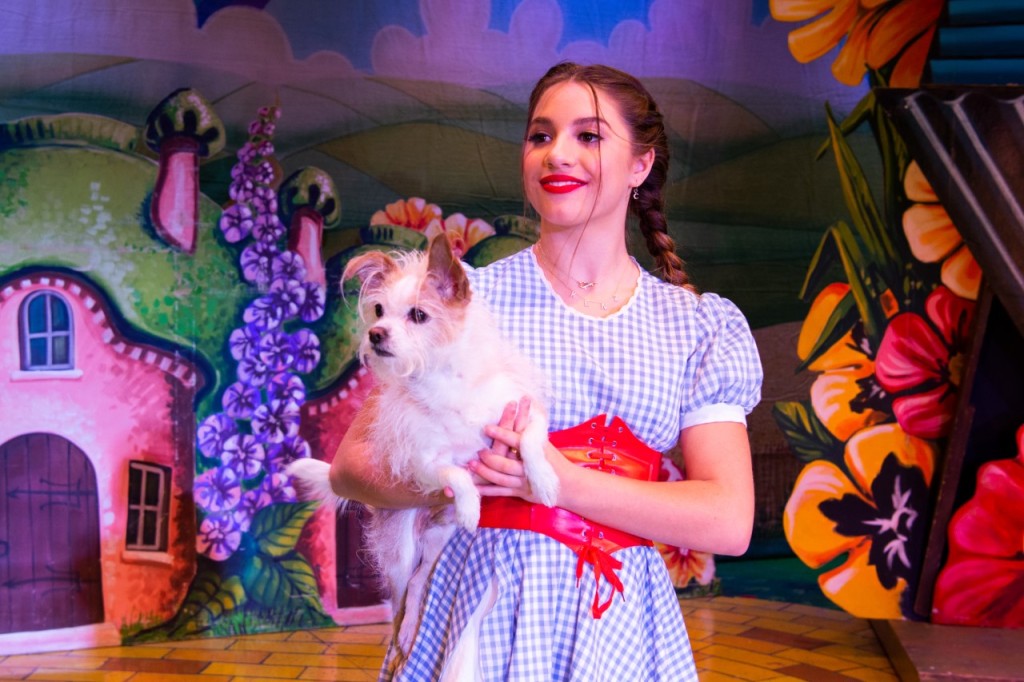 The only disappointment I had with this show at all is that, with so many principles who can really dance, they weren’t given much in that department. With Nappytabs choreographing, and not one but three Dancing With The Stars alumni, (including recent Juniors finalist Mackenzie Ziegler, who stars as Dorothy here,) I was expecting big things.  As Mr. X said–give that girl a big dance number! Let her strut her stuff! 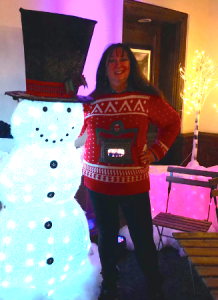 Karen Salkin and her new bestie, the Snowman, in the Winter Wonderland. Fabulous sweater courtesy of Mr. X!

Speaking of dancing, I want to give a shout-out to my favorite dancer in this show, young Josh Guerrero. That kid gives it his all and then some! I can’t wait to follow his career.

On a personal note, I want to say that The Wonderful Winter of Oz is exactly what we needed that night.  Mr. X had hurt his back pretty badly, and I had burnt my finger on my flatiron that day.  (Yes, I hate to disillusion you guys, but my locks are not naturally stick straight. I have to work hard for these tresses!) But we were not going to miss the Panto.  And, as the evening went on, our afflictions melted into the background.

So, no matter what your situation is this season, get over to the Pasadena Civic, and enjoy all this holiday fun before it’s gone in a couple of weeks!