I have a confession to make, right up front—I detest the taste of root beer, so I almost bowed-out of seeing this show! And that would have been a shame for me because The Root Beer Bandits, at the Garry Marshall Theatre in Burbank, is tons of fun!

And it’s only about an hour long, so short attention spans, (for grown-ups as much as kids,) should not be an issue.

The Root Beer Bandits is an entertaining, old-fashioned, western-themed, slapstick-y family-friendly musical comedy, with a bit of dancing and lots of singing.

(L-R) Josey Montana McCoy, Cloie Wyatt Taylor, and Kelly Brandeburg. Photo by Aaron Batzdorff, as is the big one at the top of this page.

My friend, Marc, absolutely adored the entire experience at the theatre, and says that The Root Beer Bandits is adorable and uplifting, and that some of the original songs are even touching. 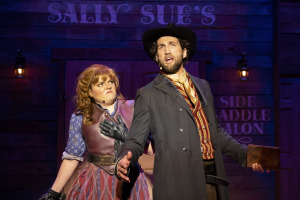 That’s really all the recommendation that you need to go see this show, but I’ll add my tad-more-lengthy thoughts to Marc’s.

The actual story doesn’t really matter here—it’s the full journey and comedy and entertainment that count—but if you really must know, it takes place in 1860 in the fictional town of Sarsaparilla City, where a duo of bandits is plotting to steal the town’s root beer supply. (And there’s an underlying theme of “girl power.”) 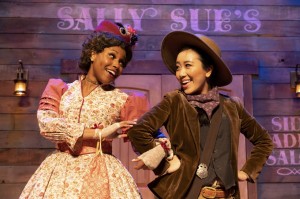 The show features a dozen original songs, and a whole passel of cleverly-presented classic western ones, such as Skip To My Lou. (And yes—I still had no idea what that term means, until…I just researched it for all of us! “Lou” is really “loo” which is—no, not “the john,” in this case—but Scottish for “love.” So it’s sort-of a love dance!!! Aren’t you glad you read this e-zine for info like that?!)

From the very beginning, with a quick voice-over, the show reminded me of an attraction at Disneyland. So did the simple-yet-adorbs western set by Tanya Orellana. (More girl power!) I actually really loved it.

And I appreciated that the musicians are on stage, in cowboy gear, to boot. Their entrance, from the back of the theatre, signals the start of the show, and it’s exciting for the kids in the audience. 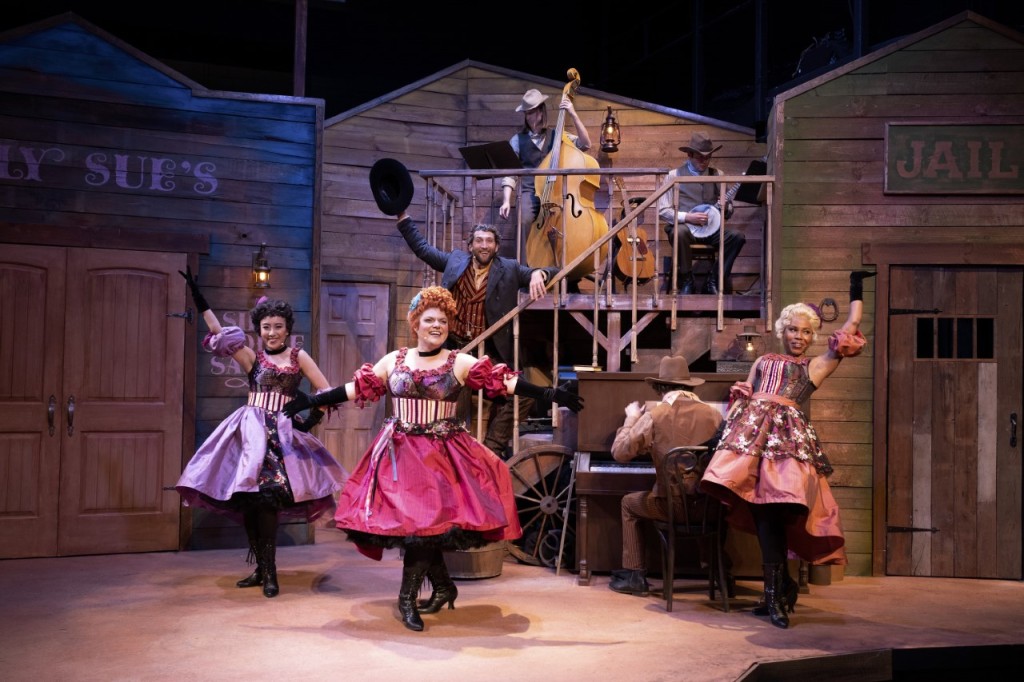 I don’t just believe in girl power; I’m also a girly-girl. So for others out there like myself, I’m happy to tell you that the guy who plays the sheriff, Clayton Snyder, is adorable! It was so hot in the theater on opening night that I was miserable at first, but when he showed-up, I forgot all about my heatstroke! (Or did it remind me of it?!) 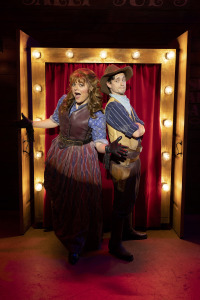 You may know by now that I’m a stickler for true-to-character casting choices (in age, ethnicity, race, sex, whatever—I hate it when I have to figure-out if the characteristics of the actors are part of the story or not. For example, I doubt that anyone will ever cast me in A Raisin in the Sun. And they would definitely be correct in that decision!) So this just might be the first time in history that diverse casting didn’t bother me at all. It’s really a non-issue because the whole show is a vaudeville-esque farce.

And the five actors in The Root Beer Bandits are all excellent, both with singing and comedy. And keeping children engaged in the proceedings. There are no weak links, as there usually are in theatre productions. The quartet of musicians joins them in that merit. 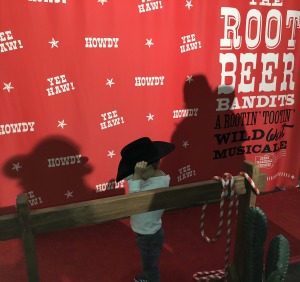 An adoable child at the lobby photo op. Photo by Karen Salkin.

The show is totally appropriate for children, but I really think it would benefit from a few more kid-oriented bits. They’re walking the line of trying to make sure that it’s interesting enough for the grown-ups while still keeping the young ’uns totally entertained, but on the night I saw it, several of the kids in the audience got antsy in-between the portions that were skewed towards them. Just a couple of more instances of talking to them might do the trick. [Note: From what I understand, this show has been performed at the Garry Marshall a couple of times before, beginning fifteen years ago! (With different casts, of course.) So kids might have been able to sit more still back in the day.] 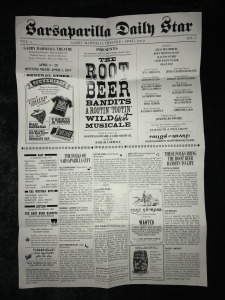 The program. Photo by Karen Salkin.

Making the entire experience extra-special from the get-go are an adorable cowboy-themed photo op in the lobby, (which you can do before or after the show,) and that the program is in the format of an old-timey town newspaper, with clever fake ads. (But I do have teach them the difference between single and double quotation marks!!! Oysh.)

The opening night after-party was also a success. They served the most pertinent snacks, which made me smile! Of course, the number one treat was root beer floats. Duh. (Marc thought I was a genius for predicting it. He kept asking me how I knew. Er—root beer bandits, hence root beer floats! I didn’t exactly have to be my usual clairvoyant self to figure that one out.) They also had a flavored marshmallow station, where we “toasted” our own over portable burners, (because they did so over a “campfire” in the show,) and a cake plate with chocolate candies, that I assume were to mimic the chocolate cake that was in the scenario for only a minute, but definitely got me craving me some cocoa-y creation! 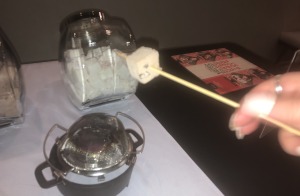 The marshmallow station at the after-party. Photo by Karen Salkin.

The show’s limited run features one “sensory-sensitive” performance, (which is very thoughtful of them to do,) and an e-word hunt on Easter Sunday, (which trust me—I wish I had time to go to!)

On a personal note, (of course—have you met me?!,) I had the pleasure of meeting the legendary Garry Marshall very briefly many years ago. A female casting director, who was a fan of my TV show, sent him a note saying, “I’m going to do you a favor and introduce you to Karen Salkin!” Uh, I think she had that very wrong—she was doing me the favor to introduce me to Garry! But I met him for only one second, on the way in to meet with his top man, Bobby Hoffman. I have a feeling that Bobby had never seen anyone like me before because he just seemed confused by everything I said. His mouth was hanging open the whole time! But I still appreciated the meeting because he was just about the only male in show biz who didn’t hit on me in those days, which was such a pleasure.

And a pleasure is exactly what The Root Beer Bandits is! (See how I brought it back around to the review of this show?) So bring your fam, a date, your pals, or even just yourself. And bring your thirst–I have a feeling their lobby snack bar will be serving root beer for the entire run. Or at least they should.