Trending
You are at:Home»THEATRE»THEATRE: THE PRIDE
By Karen Salkin on June 28, 2017 · THEATRE

Here’s my short review of The Pride at The Wallis in Beverly Hills: Go see it!!!

But you know that I can’t leave it at that, so now let me share the long version of why I implore you to not miss it. 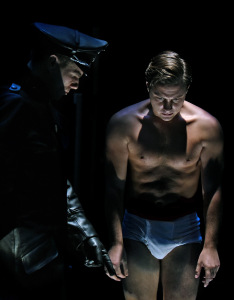 Matthew Wilkas and Augustus Prew. (This photo doesn’t really have much to do with the show–I just wanted to include a pic of Matthew. And show you how cute Augustus is!) Photo by Kevin Parry, as is the big one at the top of this page.

The Pride has been around for almost a decade now, first in London, then New York, and then even Korea, so major kudos to The Wallis for finally bringing us the play’s Los Angeles premiere.

I had missed the opening night, and then my month got crazy, so I was going to pass on seeing it. But something kept nagging at me to make the time, and I’m glad I finally did. And not just because, on the most shallow of notes, this is the best-looking cast I’ve seen in quite sometime. I get why all the characters want to have sex with each other!!! (Well, with the guys at least.) I wanted to reach-out and hug Augustus Prew the whole time, especially when he was rockin’ his little PJs! (My friend who was with me said the same thing independently, about the good looks of the cast, so I’m not the only shallow one.)

On what my mother would call “a plain little Sunday night,” the Lovelace Theatre on the main floor of The Wallis was almost completely sold-out. And for good reason; what an elegant production this is, on every level!

The intimate space has been re-configured for the performance area to be in the round, (or, more accurately, the square.) The visuals are absolutely stunning. I rarely mention the director of a play, but in this case, Michael Arden has not only made the action and performances shine, he also designed the perfect, simple set, as well. Forget my wanting to ever be directed by this guy—I’d rather he re-design my house! 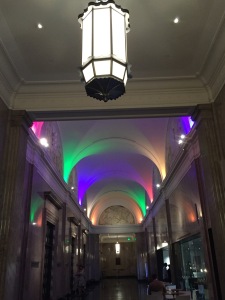 So, for those of you who don’t know, The Pride, at its very basic level, shows the difference of how gay people had to live their lives back in the fifties as opposed to now. And The Wallis was clever enough to schedule the run during Gay Pride month. (I love that they’ve even decorated the ceiling in the main lobby with rainbow colors for the occasion. I wish they’d keep them year-round.)

I’m not here to analyze Alexi Kaye Campbell’s wonderful writing for you. Or to show you my “reading comprehension,” (as many other reviewers annoyingly do,) by telling you the entire story that you really should experience for yourself, (or, at least, research.) Nor do you need to analyze it to death. Just watch the show and allow yourself to feel the pain of others, if it so moves you, as it did me. I’ll leave that all for you to discuss with your pals as you leave the theatre. I’m only here to tell you that The Pride is such worthwhile theatre that I’m totally recommending that you Angelenos see it while you still have the chance. 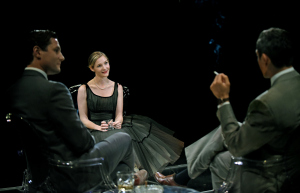 I will tell you that the action goes back and forth between 1958 (where we see a married couple and a single guy,) and 2008, (where the same three actors now play a gay couple and their female pal.) The transitions between the different periods of time are interesting, and a bit unusual. The very first one confused me a bit, but once I got used to it, I appreciated the creativity. I was especially taken with all the fabulous quick wardrobe changes.

While we’re on the topic of attire, I must say that, as a lifelong fashionista, I was uber-impressed with the spot-on costumes by Danae Iris McQueen. (Maybe she could come over and work on my closet while Michael Arden works on my house! And I’ll make the tea.) 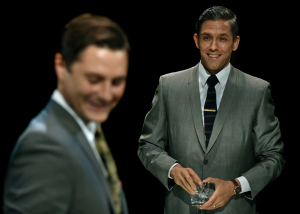 Before I discuss my thoughts on to the content of The Pride, I need to laud the performances. I rarely mention the full cast of a show, but since it’s just a quartet, who are all perfect, let’s do it! As I mentioned before, Augustus Prew is adorbs! And he made his two characters into such different entities, while both being gay men, that it made me a bit sad that I haven’t had time to watch either of the TV shows he’s starred on this year, Pure Genius and Prison Break. They’re still both on my DVR, so I have to make the time to get to them. Especially if he’s rocking those pajamas in them!

But I have watched handsome Neal Bledsoe on the two recent seasons of The Mysteries of Laura, (yes, I was the one who watched that show,) and he’s even more attractive in person. And taller. And I had not noticed his humongous hands on TV! Wow. (I did mention that I’m shallow, didn’t I?) Neal’s entire being is ideal for the roles he plays in The Pride. In the 1950s section, just listening to him talk made me feel like I was watching one of my beloved old black-and white films. 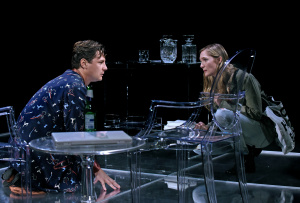 Augustus Prew and Jessica Collins. This is the only photo that gives even a tiny glimpse into how fabulous the set is! Photo by Kevin Parry.

Jessica Collins is also superlative in her parts—she plays both of them equally well. When she first arrives as a British housewife, she’s so precise that I could not picture her playing anything else! Until she showed-up as the modern girl, and nailed that character, as well.

And I actually thought that Matthew Wilkas, (who plays several auxiliary characters,) is really a Brit the entire time. He does so many different English accents so well! Each character he plays is perfectly defined.

Now, to the sadness of the topic of the play—that of people not being able to live their lives the way they want. But, although the honesty is heartbreaking, The Pride has much humor. The presentation is far from depressing for the entire two-hour-and-forty-five minute duration. I laughed almost as much as I was devastated. 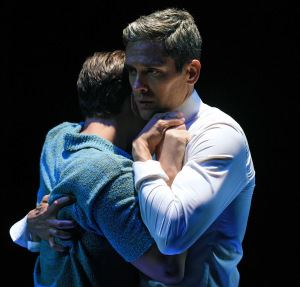 I’ve heard The Pride being described as having one disturbing scene.  Well, to me, the entire concept of having to hide who you really are is disturbing. I cannot ever fully understand what people who have to hide their true selves go through; I’ve always been an open book, (or, more accurately as Mr. X would describe it, an open wound. But at least I’m an open one.) As the Empath that I’m told I am, I’ve always felt awful for all people who feel they have to hide themselves, for one reason or another: Jews, black people who look white, gay people, and even idiots who voted for Trump and are now humiliated by it. (Harking back to Prison Break a quick sec, poor gorgeous Wentworth Miller—he’s two of those! He’s a gay black guy who looks white! So, I’m extra happy for his success!) It must be horrible to have to pretend to be something you’re not. I always think that situations like that are things of the past, but when plays like this present themselves, I realize that they really never went away. Shame.

When this play portrays what it’s like for this trio of people back in the fifties, at times I had to remind myself to breathe. I felt so terrible for them. Even though there is also pain involved with the relationships in the modern day scenario, (if we can think of nine years ago as being “modern,”) at least I could recognize it, and it was a bit easier to bear. 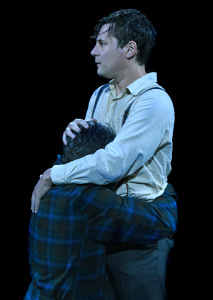 There’s one scene that’s basically about “conversion therapy” and it broke my heart; even though the play is trying to show how far the world has come in the past fifty or sixty years, we know that people in our own country are going through that very same thing! How sad. And shameful!

When I was in my early twenties, I had a very nice, wonderful dental hygienist who was not physically attractive, poor thing. But she set me straight about the most basic part of being in a love relationship. I was thrilled when she mentioned her husband; I was young and naïve, remember, and I was always relieved when someone unattractive had a spouse! (So, being shallow is not a new condition for me.) But then she told me they were getting a divorce, and I was crushed for her, assuming, of course, that this un-faced man had left her. When she told me that she’s the one who left, I let out a shocked Nancy Kerrigan-esque, “Whyyyyy???” And she answered what has become my advice to many a friend. She said, “The only thing worse than being lonely when you’re alone is to be lonely when you’re with someone!” That’s perhaps the most profound thing I had ever heard when I was younger. And I knew it right away. And it’s part of what this play is about–loneliness when you’re with someone else, no matter the reason.

The gallery of rehearsal photos outside the Lovelace Theatre. Photo by Karen Salkin.

The only thing about the entire production that bothered me in the least was an annoying clicking sound that ran through most of Act I. At first I thought it was a malfunction of the theater, but it turned-out they did it on purpose! It was to make the action more dramatic, or some such thing. They need to re-think that because it was like the Chinese Water Torture; I was about to stand-up and confess all of my secrets right then and there, to get it to stop. Lucky for the rest of the audience that the ticking stopped just in time. (Shockingly, the small amount of occasional herbal smoke on stage did not bother me, even in such a small space. As someone who suffers from scary asthma, I’m here to tell you that the smoke is not that bad.)

Other than that, the whole production is so smooth, in every way, (outside of that aforementioned ticking clock,) that, for the first time ever, I have to mention the whole team, (the ones I haven’t already lauded.) They are: Lara Hillier (assistant director,) Christopher Soley (associate set designer,) Travis Hagenbuch (lighting designer,) Josh Reid (sound designer,) Eric Souliere (casting director,) Nikki Hyde (production stage manager,) Nidia Flores (assistant stage manager,) and perhaps the most important person on the team–the dialect coach, Giles Cooper, who’s name I absolutely adore!

Everyone should see The Pride, but I feel that it’s especially important for young gay people, who hitherto now may not have appreciated what life was like for their earlier counterparts. And hopefully that history lesson will lead to better understanding, for everyone.