Trending
You are at:Home»THEATRE»THEATRE: THE PRICE
By Karen Salkin on February 25, 2015 · THEATRE

Though never a fan of Arthur Miller, (most of his works are just too painful for me,) I’ve been waiting to see this classic play of his since I was a teen-ager!

I was supposed to see a production of it when I was a young acting student in New York. But I wound-up getting sick, (because I did someone a favor, of course; some things never change,) so my mother made me stay in bed. I understood that I was way too sick to go to the theater and foist my germs on everybody, but I’ve still been depressed about missing The Price ever since. 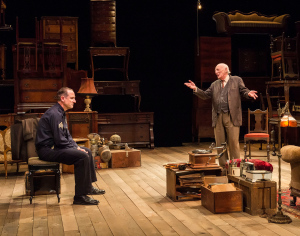 I’m so glad that this wrong was finally righted at the Mark Taper Forum this past week-end. I wonder what I would have thought of it back then, when I wanted everything to be rainbows and laughs. (Well, actually, that’s how I still feel!)

I have a feeling it would have scared me a little. But now, it hit a bit too close to home. It’s sort-of the story of what I’ve been going through with my own siblings for the past three plus years. Not fun, let me tell you.

Here’s how the theatre describes it, which will explain why I feel that way: “Two estranged brothers meet in their deceased father’s apartment to dig through his belongings, finally unearthing the hidden motives for events that long ago fractured their relationship.” The only difference for me is that I already know their motives! And I only wish that I hadn’t spoken to my siblings in sixteen years!

Okay, enough about my troubles. (For now. I’m sure I’ll circle back to them by the end of this column!) Back to the ones of the family in The Price.

I’m not going to analyze the play. Who am I to critique the great Arthur Miller? I’m here to just share my thoughts on this production, which I found to be quite good. 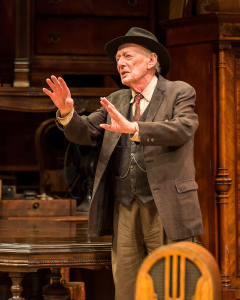 Actually, for an Arthur Miller piece, this play has a surprising amount of humor! That’s mainly supplied by the stellar performance of eighty-six-year-old Alan Mandell. The man is a genius! We Angelenos are so lucky to have this opportunity to see him work! What a joy. (I do have to admit that I occasionally lost some of his lines because he spoke lower than the other three, and we were all laughing so loudly, but three quarters of lines from Alan Mandell is worth one hundred percent of ones from most others on stage!) [Note: In reading the program, I found-out that he and I actually did the same movie a number of years ago. But it was so dreadful, that I asked to be cut out…and got my wish!]

This production featured perfect casting all around! So, rare props from me to Meg Fister for that. Each of the quartet (Mr. Mandell, Sam Robards, Kate Burton, and John Bedford Lloyd,) performed his or her job with aplomb, and I could totally believe they were those characters.

I was already familiar with three of the four cast members, including the amazing Mr. Mandell. But this is how shallow I am—Sam Robards has a zillion credits, but I know him from only the CW’s Gossip Girl and ABC Family’s teen drama Twisted! What does that say about me?! (And, of course, I’m aware that he’s the offspring of Lauren Bacall and Jason Robards, Jr.) He looks much younger than I thought. And his portrayal of what I view as the “good son” rings true. I can totally understand his character of Victor helping his dad.

They do mention the price of the antiques many a time in the play, but to me, the title really refers to the price of being a good person. Or living life. Or giving up your dreams. Or having to deal with family personalities. All of that. (See why I’m better with Gossip Girl?)

One tiny thing about the portrayals bothered me a bit; not one of the three (who weren’t the old man) had a New York accent! And they’re all native New Yorkers, still living in that city! I grew up there, too, and trust me, no one in that town speaks as well as these three actors. So, that was a bit off. 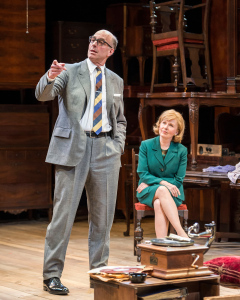 This is one of the few Arthur Miller plays that I can relate to. Maybe that’s why everything about it still felt so modern, despite it being written in 1968! Just like Sam Robards’ character in this, I was always the child who looked-out for my mother, so I know how it is. But, sadly, unlike the brother in this play, my siblings don’t have an excuse for their bad behavior. The only difference is that there’s no way in hell they would say that I should take all the money for myself, since I had done all the work. That part made me laugh. Inside, I was telling the character, “Take the money, take the money!!!”

So the acting was excellent, the production very well done, and I absolutely loved Matt Saunders’ set! It reminded me of my grandmother’s house. (And also that my siblings just junked my mother’s precious antiques. Okay, don’t get me started again.)

Mr. Mandell’s antiques dealer character had many great lines, but there were two I especially loved: “Even with high-class people, you wouldn’t believe the shenanigans!” I love that one! And I get this one: “If it won’t break, there are no more possibilities.” [Note: I was writing fast and in the dark, so if I got them a tad wrong, please forgive me.]

I was crying hysterically at the end, but I think that was perhaps for my own situation rather than for the Franz family on-stage. Or maybe because I was just emotional that I finally got to see The Price!

Here are some auxiliary notes:

I love that Ms. Burton made reference in her bio to that fact that she and Mr. Robards had shared “a New York City childhood,” because I was wondering if, as children of famous folk, (her dad is Richard Burton,) they had a bond. How many famous people can two people be related to?! These two knew/know them all!!!

Okay, here’s one more bit of shallowness from me; Mr. Robards needs to trim his eyebrows a bit. I could see them sticking-out from the second section of the audience! They were a tad distracting every now and then. I hate writing this, but you know I feel the need to help people, especially such a good actor, and I need to point it out before he starts emulating the late, great Andy Rooney!

And now some theatre notes:

Here’s the value of reading your program: I was wondering what the actual monetary price that they mentioned in the play would’ve been in the ’60s, and right at the top of the Who’s Who page in the program, they explain it all! Major kudos for that one, Taper peeps!

Also, how sad that audiences have to be told not to text! I know they do need that admonishment, but it’s just sad.

And lastly, please stop wearing fragrances to the theater, when you have to sit so close to strangers! The woman in front of us made us literally sick!

So, shut your phone, wash off the perfume, and go see The Price. Just maybe not with your siblings.