Trending
You are at:Home»THEATRE»THEATRE: THE PLAY THAT GOES WRONG
By Karen Salkin on July 16, 2019 · THEATRE

THE PLAY THAT GOES WRONG

I’ve rarely had so much to say about a single theatre experience. But the comedy that just opened at the Ahmanson, The Play That Goes Wrong, inspired many thoughts in me, on all kinds of levels. 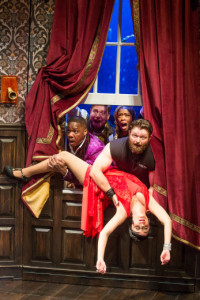 This is the bit that everyoen seemed to love the most. (Clockwise from L) Yaegel T. Welch, Peyton Crim, Angela Grovey, Brandon J. Ellis, and Jamie Ann Romero. Photo by Jeremy Daniel, as is the one at the top of this page.

I have a feeling that I had a completely different take on it than just about everybody else in the opening night audience. Most everyone seemed to absolutely adore it, but several people I spoke to at intermission and afterwards told me that it did nothing for them. One woman even complained to me that it was tedious. (It actually is exhausting, but for the actors! They must each lose twenty pounds a show!)

Truth be told, it really didn’t get to me that much, either. But, though not a fan of farce nor slapstick, I appreciated The Play That Goes Wrong, for a plethora of reasons, (which, of course, I’m about to enumerate for you!) I was a tad surprised that the well-performed antics didn’t make me laugh as often as they were designed to, but I genuinely enjoyed listening to the raucous laughter and jovialness of the majority of the assemblage. (I guess that for once, as the title of this e-zine states, it was not about me!)

But, even with my dearth of mirth, I recognize the brilliance of every little bit, every little line; it’s awesome to behold. It’s all so nutty, in a good way. So I’m advising you to not judge harshly if it doesn’t make you laugh out loud the entire time; just sit back and enjoy watching this uber-precise work, and the crowd, as well.

I actually laughed a lot more in the second act, which can be explained by expectations, a phenomenon of which I’m always aware. Mine were high going in, so Act I did not quite live up to them. That situation lowered my expectations for Act II, so then I enjoyed it much more than the first. Crazy, right? But that formula rarely fails.

Prior to seeing it, I didn’t know what The Play That Goes Wrong is about. From the title, I knew that it’s a comedy, and I figured-out that everything would go wrong. (I didn’t even need my full 147IQ for that deduction!) But I had no idea that it’s a play-within-a-play, nor that it would be so slapstick. (If you must know more than that, a fictional University Drama Society puts on an old-timey murder mystery, and that is the play that goes wrong.) 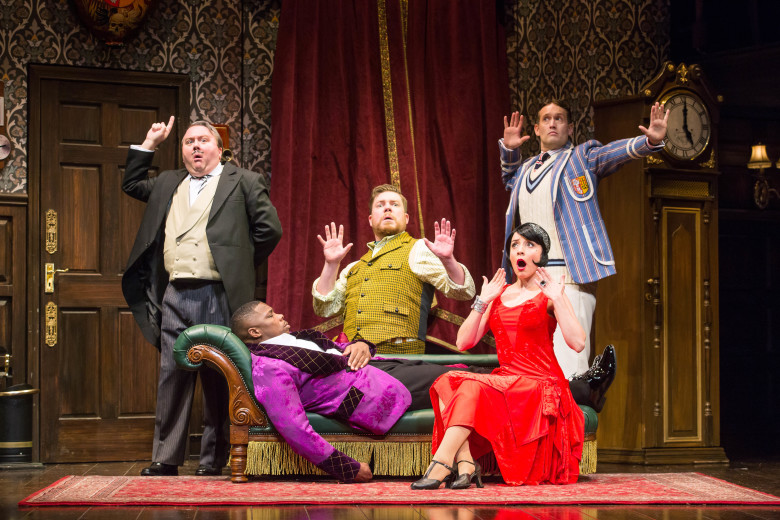 Surprisingly, I don’t remember even having heard of this Broadway hit. But I must have, because I never miss the Tonys and this show won an award two years ago, (for Best Scenic Design of a Play—the only Tony for which it was nominated.) Obviously, that one mention, (probably as a sidebar coming back from a commercial,) didn’t stick in my mind, so it was all new to me.

The history of The Play That Goes Wrong is pretty fascinating, but way too long to tell here, so you should look it up for yourselves some time. But I can tell you that it began in England, which makes sense because the Brits also loved the unfathomably long-running, (sixteen years, to be exact!,) No Sex Please, We’re British! That was one of the worst entertainments I’ve ever seen! So that country’s denizens, as a whole, have a slapstick-y sensibility. (And bad teeth, but that’s a whole other story.)

As to the specifics of this National Tour, the entire cast is spot-on. The timing of every actor is impeccable. My friend and I especially admired the phenomenal physicality of Ned Noyes, as the *lover (sort-of.) And I adored the voice of Peyton Crim, in the role of the *girl’s *brother; that guy probably never needs a microphone. *[Note: It’s hard to explain the characters; you’ll have to see the show to understand whom I mean.]

There are more sight gags than I’ve ever seen anywhere! The show’s creators really thought of everything. 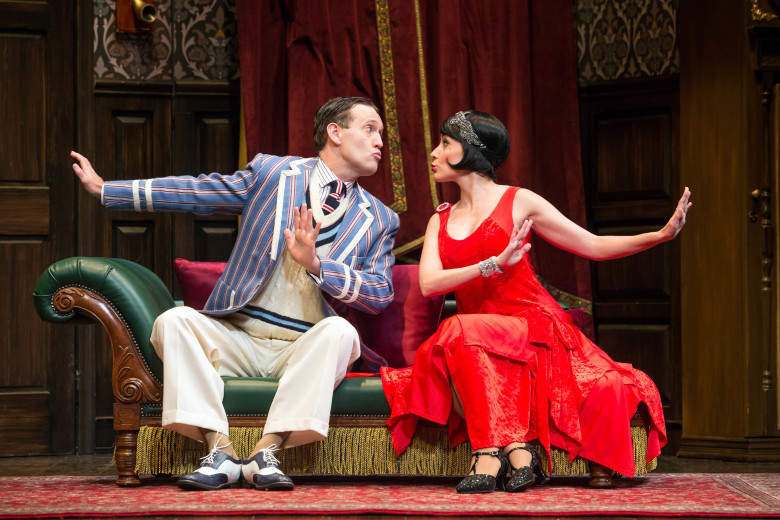 And the set by Nigel Hook is very attractive and creative. I wish I had taken a picture of it before the official presentation began because it doesn’t look at all the same at both intermission and the end.

The opening night audience must have consisted of pretty intelligent peeps because they laughed at all the amusing mispronunciations of one character, (who I think is a butler.) (Clearly, few of my pals, nor sports commentators, were among us that night!) 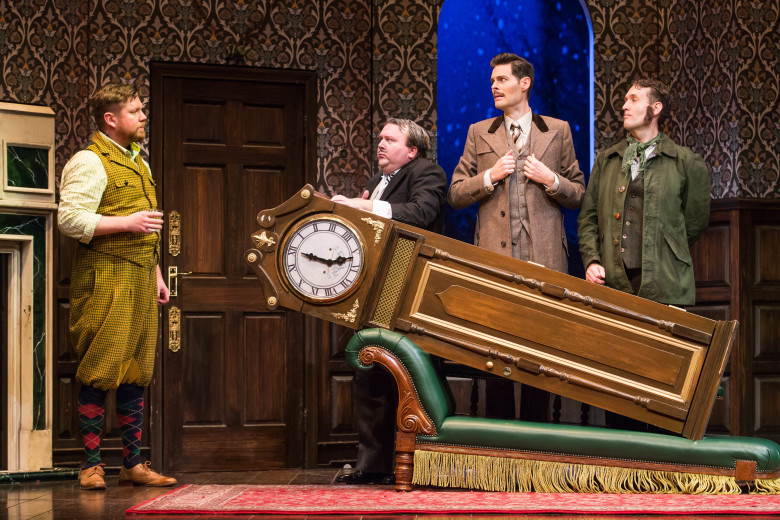 Now here’s why I so appreciated this show: It reminded me of many interesting episodes both in my own life and ones I’ve seen in the media.

First and most significantly, it brought to mind my favorite example of why comedy is, and always has been, so much more important than drama in this stressful world. In one of the best movies ever made, Preston Sturges’ brilliant 1941 Sullivan’s Travels, a director of comedic movies decides to make a drama instead, and sets out to see the country to come up with something that will be socially relevant. But in that quest, he winds-up in prison on a chain gang, and when he goes to “movie night” with his fellow convicts, everything changes for him. Their reaction to the comedy they’re viewing says it all; for me, it’s one the most memorable scenes in film history. And I totally agree with the message—creating something that makes people laugh is one of the most worthwhile things that a person can do, in my opinion. And that’s just what the writers of The Play That Goes Wrong–Henry Lewis, Jonathan Sayer, and Henry Shields of the Mischief Theatre Company in London—have done. Even with my own shortage of laughter through most of this play, I sooo enjoyed the downright guffawing that surrounded me, along with watching everyone’s shoulders heave up-and-down and their heads being thrown back with joy. That made this a truly wonderful time for me.

Secondly, at one point in the first act, Evan Alexander Smith, as the Inspector, breaks the fourth wall and tells us to stop laughing.  He admonishes, “You’re a terrible audience!  What are you laughing for?!” Well, right in the middle of the very first episode of my former TV series, Karen’s Restaurant Revue, the tiny little audience Mr. X had coerced me into inviting couldn’t suppress their giggles anymore and burst out laughing. I had envisioned my endeavor as a serious one, so I just stopped what I was saying on-air, and looked over at the audience and said “I’m a serious restaurant critic! Why are you chuckling?!” That bit in The Play That Goes Wrong reminded me so much of that. I love when something can bring about good memories. 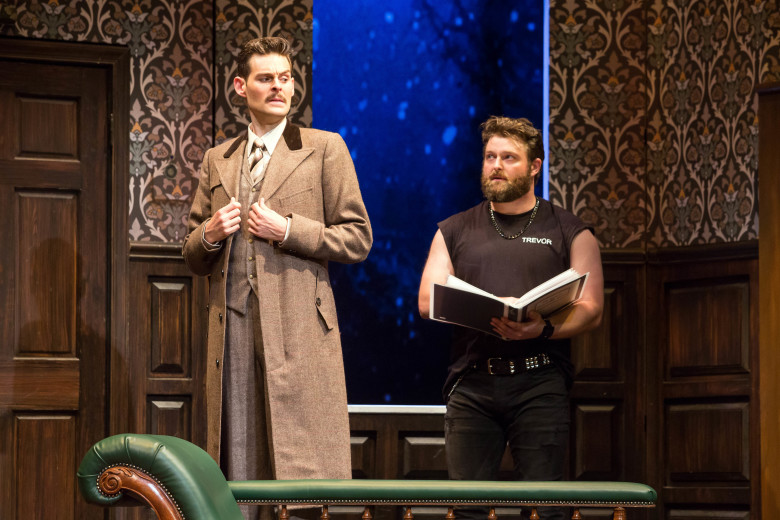 And thirdly, I don’t want to spoil anything for you, but when someone in the inner play has to take over a role, and speaks in a very bad New York accent, it reminded me of a comedy audition I did when I was a young actress. I chose to do Shakespeare in a thick Brooklyn accent, (which, trust me, was funny,) but the casting person totally didn’t get it. He thought I was being serious. I just wish he was still alive to see this show; perhaps he’d see that I was ahead of my time.

And, of course, it made me hark back to my own quintessential stage experience that every actor has had at one point in his or her career, if even in elementary school. Mine came in one of my first stage roles way back in the day. I had a role in a six-person ensemble production at the revered Fountain Theatre in Hollywood. I had beaten-out many young actresses for that part, (including some of my own good friends!) The setting was a party with three couples, and my “husband” and I were the last ones to arrive. One night, when we were waiting out back to go on, we got into a particularly lively discussion, and totally forgot to listen for our cue to enter! All of a sudden, we heard one of the other actresses say loudly, “I think I hear them now.” And she ran outside to get us! I’m mortified over that snafu to this day.

And when Mr. X was starring in the National Tour of They’re Playing Our Song, I used to hang-out backstage, teaching the crew and the supporting cast how to play Uno, which, of course, they loved. One night, one of his three back-up singers, (who are integral to that musical,) and I were deep into a game, and, to our horror, we heard the Act I curtain-closing number that he was supposed to be in with Mr. X! We ran to the dressing room, with the guy apologizing profusely to him, but Mr. X was furious with me for being so distracting in his professional setting! [Note: I just read this part to him, and even after all these years, he said, “Honest to God!  It’s just lucky you weren’t a doctor instead of a personality.”]

The play at the Ahmanson brought all these experiences to mind, in the space of just a few hours, which is a very good thing. 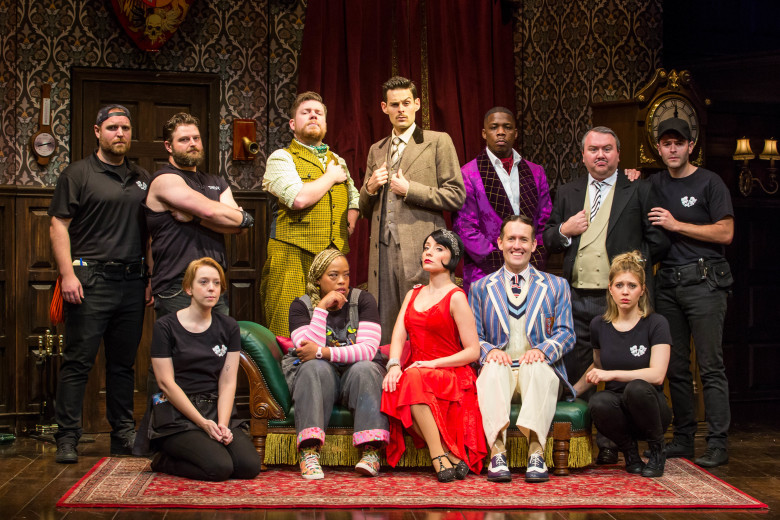 The entire company of the National Tour of The Play That Goes Wrong. Photo by Jeremy Daniel.

So I say, for whatever reasons, (especially forgetting your own troubles for the night,) go see The Play That Goes Wrong. It should make you laugh, and even if it doesn’t, just look around and enjoy. Mr. X laughed hard when I just told him about it!

And by all means, bring the kids because they should love all this expert silliness. I also suggest that you get into your seats early for the subtle pre-show shenanigans.

And make sure to read the whole program for this one! It’s very amusing, à la the ones for Dame Edna’s presentations. I always love it when performers do a little extra to entertain us.