Trending
You are at:Home»THEATRE»THEATRE: THE MANOR
By Karen Salkin on February 3, 2015 · THEATRE

The play The Manor, which is put on in a most interesting location, makes for a fun evening. If you’ve never been to Greystone Mansion, (where it takes place, both in the play and real life,) this is your chance. I had been there just once, three and half years ago, when I interviewed the great Usain Bolt! But we were just outside then, and between the extreme heat of that day, and my extreme excitement at meeting the fastest man on earth, I totally forgot to take in my surroundings. So, I was thrilled to get another crack at it when I attended this follow-the-actors-around play inside the mansion. 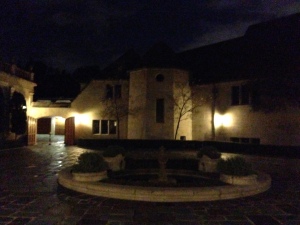 Seeing the interior of this historic edifice is half the fun of the experience. If you don’t care about sitting in the front row of each scene, hang back a second as your group leaves each room to read the short framed blurbs on the walls. (Don’t do it sneakily, or inconvenience anyone; just take a second to read them, which will make you last in your group, and therefore, not have your choice of seating at the next location.)

Since the actors are virtually right in your proximity zone, it’s not the kind of show where I could take notes, so all these observations are the ones that made the biggest impression on me.

I do have a few little nit-picky notes–like that the girl playing the bride should wash her hair, especially since she’s so close to the audience, (I’m not kidding—it was very distracting,) and I still don’t understand why one of the Housekeepers, (who lead the groups around all night) has to be mute (unless they just didn’t want to come-up with even one line for her,) and that the two cute young guy characters seemed to be directed to look so suspiciously cozy that my friend and I were positive that the story was going to be about how they wind-up together–but I don’t want up to focus on those. I want to focus on the fun. (And how cute those two actors are!)

The Manor is my least favorite kind-of plot; it’s “inspired by true events,” but is not really the true story. So, if you just take it as a work of fiction, it might be easier for people who are as literal as I.

So, here’s the deal: This is based on the early-ish 1900s family and political drama that the real oil tycoon, Mr. Doheny, found himself and his family in. I researched it (a lot!) all week-end, after I saw the show, and while The Manor keeps many elements of the true story, it’s pretty far from it; it’s just something like it. But the fun is that it really did go down at the real Greystone Mansion, where we were watching this all unfold! That makes it all extra interesting.

So, the plot and storyline aside, it’s kind-of cool to watch these people act a few feet from your face. What concentration they must have!

The entire audience starts out in one drawing room, and then breaks off into three groups to see different scenes in different areas of the first floor. Every group gets to see every scene, just in different orders, until the ends of both acts, when the assemblage gets to all come together once again. As a former actress myself, I can’t imagine having to enact the same scene multiple times in a couple of hours, so extra props go out to this cast. 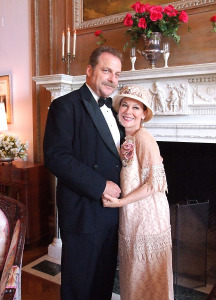 Darby Hinton (who has a beard now) and Kathrine Bates. Photo by Ed Krieger.

Speaking of the cast, everyone was good enough, but the matriarch and patriarch of the family, Kathrine Bates (who also wrote it!!,) and Darby Hinton, were the best. Kathrine, especially, gave it her all. And those two have done this play for the thirteen years of it’s two-month-a-year run! Wow.

In other cast notes, the two young guys who were doing their roles the night I saw it, Ben Gavin and John-Paul Lavoisier, are really good-looking; they look nothing like their pix in the program! (Time for new good headshots, guys!) Maybe because they’re so attractive, and were so intense in their roles, my friend and I were thinking at first that the plot was going to turn-out to be about a gay scandal back in the day. (The real story actually had that as a possible reason for what took place, so perhaps they were using it as sub-text.) But later on in the drama, Jean-Paul, as the character Sean, had the same type of looks for his step-mother, so maybe the actor just can’t help being seductive. And, with that face, I bet it works for him more often than not!

I have one small bone to pick: They should make it clearer from the start of the second act that it’s now ten years later. The character who’s leading us finally says it, but after part of one scene has already taken place. I finally found that note in the program when I went to write this review, but, first of all, very few audience members I ever speak to read their programs, and secondly, the program itself was very “busy,” so even I, always a thorough program-reader, missed it. (That note was not int the regular place in the program, where scenes and action are usually listed.)

Of course, this is not the sort-of show that one can eat snacks during! So don’t! But never fear—they have a table full of packaged treats on a table in the courtyard at intermission. They’re basically complimentary, but they do have a couple of donation boxes on the table, as well. I think that, for the price of the tickets, they should just make make them free, period. 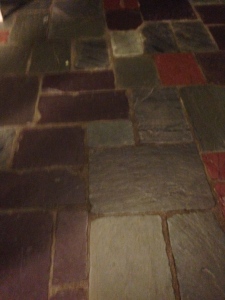 I just had to show you this outside tilework at the Mansion because my two next door neighbors in Brooklyn still have the same thing! I’ve been fascinated with it since I was little! Photo by Karen Salkin.

Speaking of free, they have free on-site parking, which is perfect because there’s virtually no place else to park in beautiful Trousdale Estates.

And lastly, here’s one funny story that I hate to bust myself on, but my sense of comedy is compelling me to share it with you. (And, it also serves as a cautionary tale of where to sit for the penultimate scene.) For fans of classic television comedies, let’s just say that I had a “Chuckles the Clown funeral” moment at the show. I’m still not over it! A note in the program says, “Your active involvement is part of the play.” Well, the audience my friend Alice and I saw it with got more than it bargained for that night, with our accidental involvement!

This is what happened: The entire assemblage was bought to the sprawling staircase at the entrance for that big scene. We were told to either go up the stairs to watch from the over-looking sides or to sit in the seats at the bottom of the staircase again, as we had for two other scenes.

Alice and took the ones we had before, right at the bottom. We were surprised that no one joined us, but oh well. We wanted to sit to watch, rather than to stand over it. I don’t want to tell you the action, but trust me, don’t sit down there!!! Before I knew it, there were two actors on the floor…right on my feet!!! One of them was giving it her all, and therefore, could not move off my foot. So—I promise, I could not help myself—I started laughing!!! Thank goodness I was wearing a scarf, because I basically stuffed it in and around my mouth to hold my laughter in. I made myself cough to disguise the chortling, and my body was heaving up and down, which I was hoping made it look like I was at least crying from the play action. It was the worst feeling.

Then, all of a sudden, hear comes a third actor, getting in on the drama of the moment. And he was down there at my feet, too. I thought I was going to have a heart attack from holding it in. (I’m actually hysterical laughing again just writing this.) Tears were streaming down my face. At least I knew enough to not look at Alice whom I heard going through what I was; we would have both lost it, which we did the second they had us move to the final room. (Again—it’s not that that scene was funny! Or that the acting was bad. It’s just that they were doing it right on my feet!!!)

So, we thought the play was over when we moved back to that original room, and that the cast was just going to bow. So, we let it all out. All of a sudden, there they were, doing the serious wrap-up scene! And there we were, stuck right dab in the center of the first row (because they said to take our original seats,) trying to calm ourselves down once again. It was horrible. But I’m proud of us for controlling it, unlike Mary Richards at Chuckles the Clown’s funeral on the classic Mary Tyler Moore Show back in the day. So, do yourself a favor; if you go see The Manor, when they go to the staircase, don’t sit right there!

Other than that, I really do recommend this interesting experience. (Just make sure you dress in layers, and wear comfortable shoes! Although I think it would be lots of fun if they had the audience dress for the 1920s one night.)