Trending
You are at:Home»THEATRE»THEATRE: THE LAST SHIP
By Karen Salkin on January 24, 2020 · THEATRE

Many years ago, when I was still doing my TV show, I met Moon Zappa, who invited me over to meet her family. To my shock, her father, the legendary Frank Zappa, asked me to come down to his studio because…he watched my show! And he wanted my opinion of the oratorio he was working on, an experience over which I’m still in shock. And ever since, I’ve wondered why a rock music icon would want to branch-out like that. 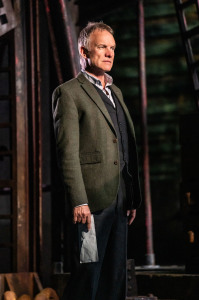 Sting. Photo by Matthew Murphy, as is the one at the top of this page.

And now, here’s Sting, one of the most impactful singer/songwriters of all time, doing sort-of the same thing by writing the music and lyrics for this Broadway show, The Last Ship, which was inspired by his early life growing-up in a small ship-building town in North East England. So I’m guessing that wildly creative, talented, visionary people can’t help making extra work for themselves, which my early encounter with greatness helped me understand a bit. [Note: the Broadway version of The Last Ship had a completely different book, written by someone other than Lorne Campbell, who wrote and directed this newer version.]

But, still, writing this entire score, both lyrics and music, must have been a major undertaking for Sting, even though he did not need to do this for his career. So, in case you can’t tell, I’m uber-impressed with his incredible accomplishment. (And always with his many humanitarian endeavors!)

So let’s be real here–seeing Sting onstage is really the main attraction of this musical. The show is…good enough. It’s a tad interesting, but mainly, where else would you get to see a bona fide music superstar perform so up-close and personal without the hassle of going to an actual concert?! So that makes The Last Ship at the Ahmanson Theatre definitely worth seeing. Not only is he in it, but so are at least a trio of his already-known songs.

Actually, though, everyone in the show sings beautifully. Their voices are really a joy to hear. I especially enjoyed Oliver Savile, whose voice made me comfortable with every word he sang. His second act duet with Frances McNamee was my favorite number of the night. 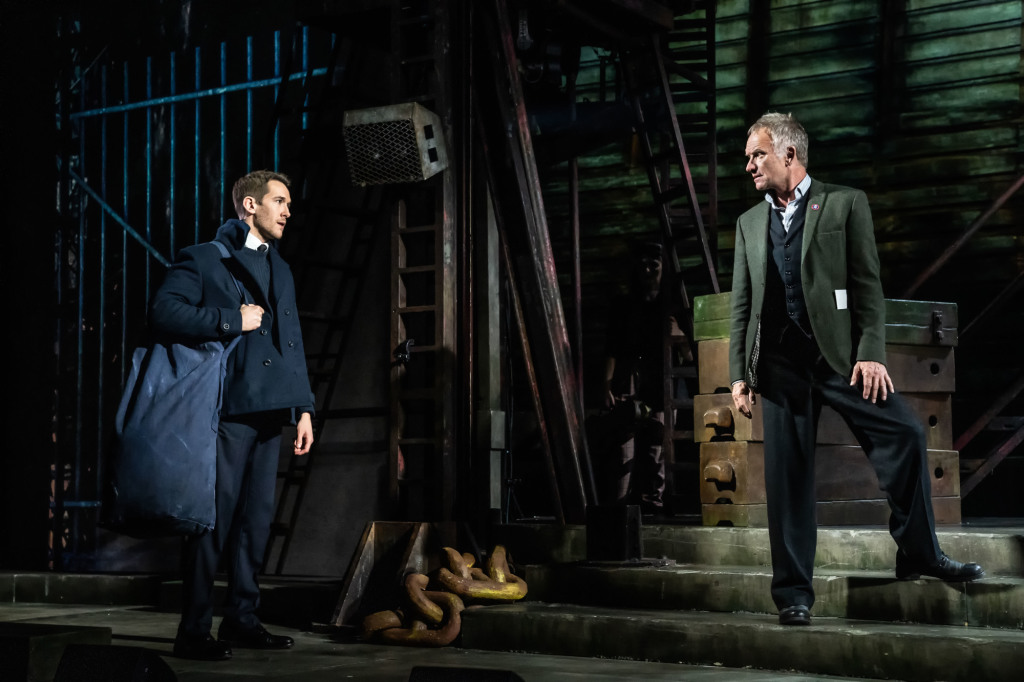 And here’s something you’ve never heard me say before—Jackie Morrison, the woman who plays the wife of Sting’s shipyard foreman character, sounds somewhat like Mary Martin, both in singing and speaking. A higher compliment I cannot give an actress.

Matt Corner (whom I thank for having such an easy name,) and especially Marc Akinfolarin, as supporting characters, both inject a much-needed shot of energy into the proceedings.

And here’s something interesting–Sting cast himself as an old man in this show! I guess in reality he is one, but he usually presents as just a hip guy, so I’ve never ever seen him as his real age. Good on him for doing that.

I really enjoyed most of the Riverdance-sounding music, played by musicians who were on stage, off to the side, and in the back, but still occasionally slightly visible, especially the piano player/conductor’s hands. Having them right there somehow made the action of the narrative a bit less gloomy.

And gloomy it is. The Last Ship is about a shipyard (duh) in North East England being closed-down in 1986 after generations of their citizens have worked there, and the ensuing tension between the workers and new management. And, oh, yeah, there’s a pat love story woven in there, of course. (Doesn’t every musical need an angst-filled romance?) 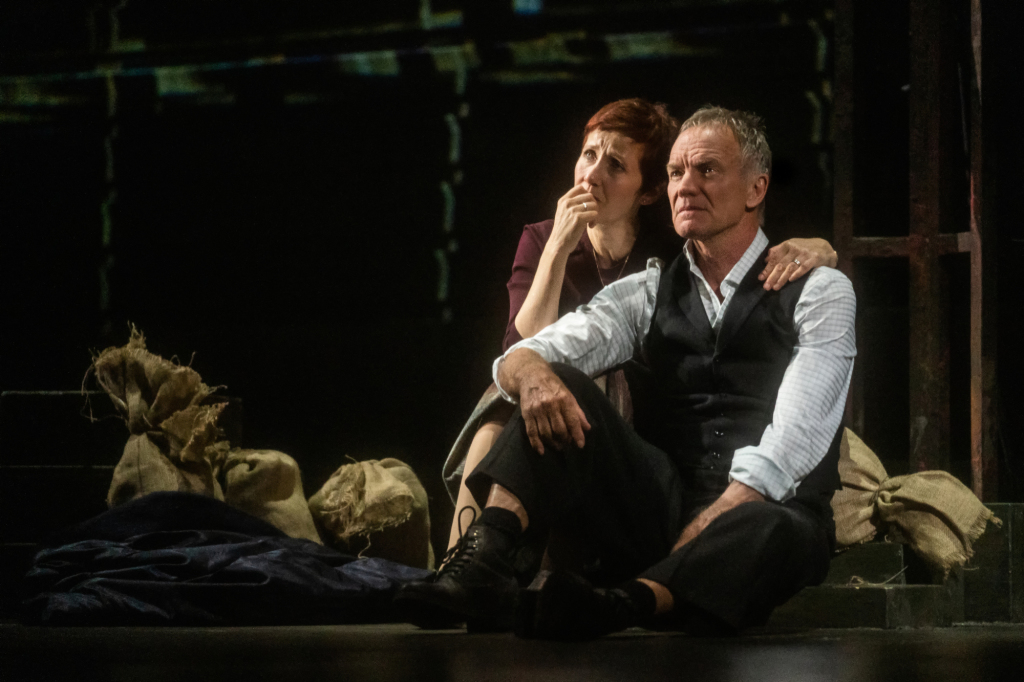 The Last Ship’s set is utilitarian enough, but the more-than-excellent projections are the real deal. They’re just wonderful. Without them, there would really be nothing to look at at all because…the stage is really dark the entire time!!!

The lighting designer, Matt Daw, missed the mark on this one, big-time! Throw some light on for us, man! I know he was trying to set a mood, but that mood is moot when we can’t see any of the actors except for pretty much their silhouettes! Lighting designers should want people to be able to make-out the action of the mood they’re setting! That’s Lighting 101. I didn’t even need to date my lighting professor to learn that lesson! (But, of course, I did, anyway. But that’s another story for another time.)

This was like seeing “the show must go on” during a power outage! When The Last Ship comes back from intermission, the women in it do a bit of engaging with the audience, and the main one says something to the effect of, “Let’s get some light in here so we can see you all!” Well, that’s the sentence that was running through my head throughout the entire three hours! It’s exhausting trying to make-out the actors’ faces, especially from pretty far back. Dark theatre lighting like that just puts me to sleep. And when I was able to keep my eyes open that night, I kept checking my glasses to make sure they’re not sunglasses. Thank goodness at intermission everyone back there was complaining about the dark stage, because I was beginning to worry that, like Bette Davis in Dark Victory, I was about to hear, “Prognosis negative!”

And there are a few other aspects of The Last Ship that bothered me a bit, such as that some of the lyrics are a little cheesy. For example, “Coming home isn’t easy, and truth be told, I’m queasy.” That’s like the kind-of stuff I wrote in elementary school. Like my Father’s Day poem when I was ten: “Oh daddy dear, I love you so. Please let my brother watch Curly, Larry, and Moe.” Oysh. 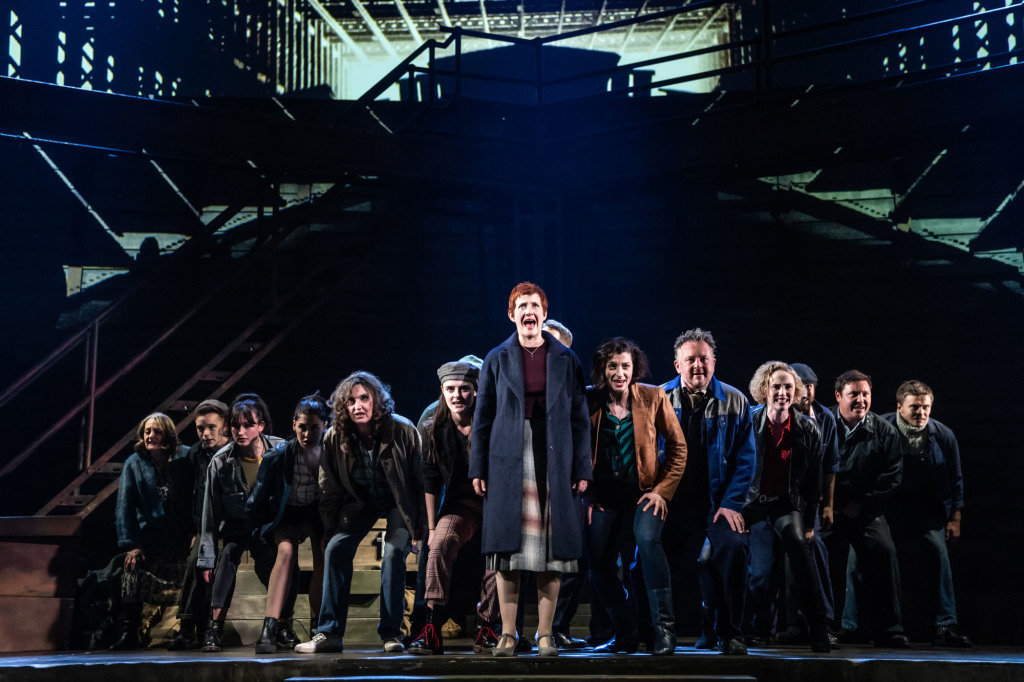 And this is a tad bizarre—the actors’ accents all sounded so fake, (so I was grateful to be able to make-out about half the dialogue,) but in reading the program, I discovered the entire cast…is from England! Granted, everyone in that country has different accents, but it’s still weird to me. And I’ve never heard British singers sing with their accents, as these performers do, so I was positive they’re all Americans, and putting-on the British!

But most egregious is that the show is way too long. It does open with an interesting tableau—all the actors standing still with the moving clouds projection at the top—but, as English Dancing With The Stars judge, Len Goodman, would say of their standing around for those eight minutes at the beginning, they’re just muckin’ about, which I am not a fan of.

But, somehow, the musical does gain a bit of strength near the end. And I do remind you—you’re getting to see Sting in person at one of the classiest theatres in town! I totally recommend The Last Ship on that merit alone! Even if you’re not a big fan of his, it’s still a fascinating experience.

And I must laud Center Theatre Group for putting their “Please refrain from wearing strong perfumes and cologne” plea in a place of prominence and on an earlier page than ever before in the programs for their theatres. That announcement used to be a tiny note in the middle of a page in the back of the program, so I hope that more people will see it now, and comply. (Although people who do wear fragrances to theatres, or show up with their hair piled on top of their head, or schnurgling with a cold, as a pig woman behind us did the entire time at this one, are selfish by nature, and I doubt a request like this one will help to begin with. Shame.) 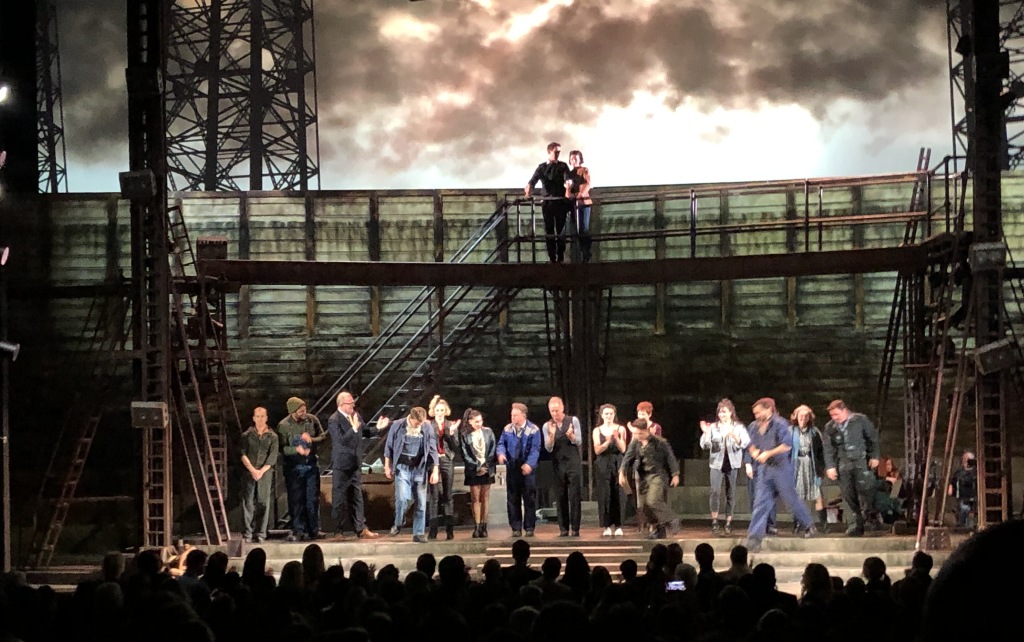 Now these last three paragraphs contain several questions for those who’ve already seen the show. So if you haven’t yet seen The Last Ship, but plan to, jump down to the very last paragraph, right before the show info. Okay, here are some questions and thoughts that occurred to me when it was all over:

Exactly where did they drive that gigantic ship to? And who paid for the fuel? And how did just one sailor and his non-sea-going woman friend do all the work to keep it going? And now all those men who finished the ship still have no jobs! And will probably never get hired anywhere, especially in that town, ever again because of defying the management like they did!

And the exact story of The Last Ship is not even a true one, so what event is that footage of all those defiant women from? (I feel like it might be from a real-life strike in England about which I saw a movie a few years ago, but I couldn’t find a credit in the program, so I have no answers for you.)

If you can clear any of it up for us, please feel free to do so in the Comments section below. Otherwise, go enjoy Sting and his many talents!

[Note: I’m going to try my best to live-tweet the Grammys on Sunday, ahead of my full review right here on Monday. @MajorCelebrity. But I don’t know how long I’ll be able to stand Alicia Keys doing her usual awful, pretentious, smug, “all-about-me” hosting job! I love her music, and applaud her many talents, but hosting is definitely not one of them. Watch the show along with me, and you’ll see what I mean.]